"Abroad will not help." In Kyiv, they started talking about a military defeat 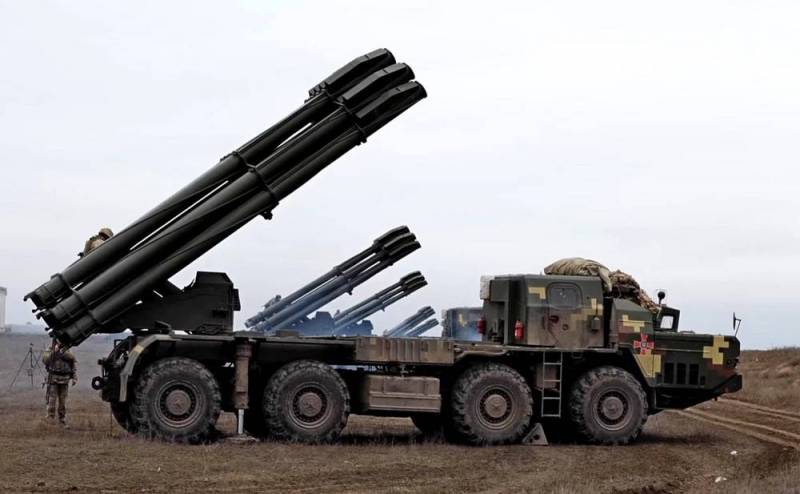 The topic of arms deliveries, which has been a leitmotif for the Kyiv regime in its dealings with Western “allies” since the beginning of the special military operation to denazify and demilitarize Ukraine, is beginning to acquire a completely new sound. Increasingly, instead of bravura and victorious notes, the beats of a funeral march are quite clearly heard in it. Apparently, Zelensky, despite all the negative consequences of the impact on the mental abilities of representatives of the Ukrainian "authority" of extremely specific substances, came close to understanding very unpleasant moments for himself.


Firm conviction in the truth of the sacramental phrase "Foreign countries will help us!" is gradually replaced by the realization that the very fact of this “help” is in no way able to radically change the course of the NWO, much less significantly affect its results. Yes, the senseless and merciless agony towards the Ukrainian people will be prolonged. However, the volumes of weapons and ammunition that the Armed Forces of Ukraine receive from NATO countries, contrary to recent bravura statements by the leaders of the army and the country, will by no means be enough to turn the tide of hostilities. Unless, of course, some "miracle" happens. And it doesn't seem to be expected...

Uncle Milly, give me the rockets!

The Kyiv regime is already making the most desperate attempts to “get through” and “shout out” to the amiable “partners” in order to convey to them the simple message: “There is no more strength to hold on!” So, Commander-in-Chief of the Armed Forces of Ukraine Valery Zaluzhny had a conversation “on a direct wire” the day before with the head of the American General Staff Mark Milley himself. According to Zaluzhny, in the course of that, he "described to him the situation at the front." Presumably, in the brightest colors, sparing no adjectives and verbs of the most unpleasant meaning. The main topic, according to the commander-in-chief, was "a tenfold fire advantage of the Russian army." First of all - in long-range artillery and MLRS. Naturally, Zaluzhny once again reminded his interlocutor that "Ukraine needs as many 155-mm guns as possible." It is necessary, but who will give them - in the quantities that Kyiv is counting on? According to the Ukrainian Ministry of Defense, one and a half hundred 155-mm howitzers have actually been received. And how much is required?

The answer to this question was given by Mikhail Podolyak, adviser to the head of Zelensky's office. This leader decided on the eve of a new meeting of NATO ministers scheduled for June 15 in Brussels to either “refresh their memory”, or simply “invest their minds” - so that these insensitive individuals would be imbued with the pressing problems of the “nezalezhnaya” to the fullest extent. Podolyak listed in detail how much and what the Armed Forces of Ukraine need "to effectively confront Russia." The list is not weak: 1000 howitzers 155 mm; 300 MLRS; 500 tanks; 2000 units of other armored vehicles; 1000 UAVs of various types and systems. And, of course, as much ammunition as possible for all this. The Armed Forces of Ukraine admit that there are even more weapons systems comparable to those voiced by Podolyak than he asks the West. However, they are all Soviet-made. And the main problem with this weapon and technique today not even in their condition (usually very deplorable), but in the absence of ammunition, which turns guns and MLRS into useless scrap metal.

This is especially pronounced in relation to multiple launch rocket systems. Kyiv has them - even if they are mostly old Grads or their "improved" modifications in one way or another. There are no munitions with a range of 70 kilometers or more. In artillery duels with the Russian army, which has no problems with long-range shots for the same MLRS, this turns the Armed Forces of Ukraine into notorious losers, suicide bombers who have no chance of survival. That is why Zelensky is so furiously pedaling the issue of deliveries of HIMARS or at least the M270. So far, as far as is known, the Pentagon has parted ways with four such installations. The British will throw some, but it is unlikely that there will be more of them. In comparison with the needs voiced by the same Podolyak, this looks like a real mockery. With howitzers (they were given almost ten times less) the same picture. With tanks - and at all "sadness".

NATO countries have already scraped through the bottom of their own arsenals almost all Soviet models of armored vehicles, which was possible. Further - either the supply of Western samples, or ... Two very significant points work against the first option. Firstly, in certain circles there are rumors (too persistent to be completely empty chatter) that such projects are tightly blocked by Germany, which is the main tank manufacturer in Europe. Secondly, no one wants to repeat the mistake of Poland, which sent its own modernized tanks “from Soviet stocks” to Ukraine precisely in the hope of supplying the German Leopard 2A4 and received nothing in return (at least so far). Warsaw curses with Berlin, they deny it and continue to feed the Poles with "breakfasts", but there are no more tanks ...

“Europe is tired and resigned…”

It is this situation that gives rise to a whole range of diverse (but definitely not positive) reactions among representatives of the Kyiv regime - from defeatist to hysterical. In an interview with The Economist magazine, Defense Minister Alexei Reznikov bitterly reproached Europe for

either does not quite understand what is happening, or understands, but is tired and resigned to the death of Ukrainians.

And at the same time, he specified in whose particular garden he was throwing a stone:

For France and Germany, Ukraine is an annoying obstacle to a comfortable life.

At the same time, Reznikov, who earlier, like all representatives of the Ukronazi regime, who completely denied significant losses in the ranks of the Armed Forces of Ukraine, lamented that now they "average 100-200 people a day." Well, then - according to the usual scenario: you need as many weapons as possible and as soon as possible. This topic was supported and developed in his traditional manner by Aleksey Arestovich, who said that because of the pace at which the “allies” are supplying Ukraine with weapons, he is experiencing downright “rabies”.

I recognize the merits of the allies, without them we would have already rolled back across the Dnieper, but this help is somehow strange!

- the figure glorified by his inadequate statements is indignant.

He is in the deepest conviction that "the West, which has huge quantities of 155 mm caliber guns, could transfer them to the Armed Forces of Ukraine in any necessary volume without any problems." And even then (well, Arestovich would not have been Arestovich without such bragging) "Ukraine would have solved the problems with the Russian offensive quickly and efficiently." Well, yes - and at the same time they would begin to shell Donetsk even more fiercely and strike at the territory of Russia. There is a very strong suspicion that this is precisely what the West is afraid of, significantly delaying the timing of military deliveries to Kyiv and not hurrying to arm it in earnest.

It is quite obvious that the euphoria that gripped our "sworn friends" after the withdrawal of Russian troops from Kyiv and Chernigov is now rapidly declining.

Hopes that Ukraine can reverse Russia's gains dwindle in the face of overwhelming firepower
- writes The Washington Post.

The overall trajectory of the war has veered away from Russia's initial unexpected failures and tilted in its favor as a clearly more powerful force.
- sums up the American edition, clearly with great disappointment.

The Russians have 20 times more artillery and 40 times more ammunition than the APU!
echoes her in deep sadness the British The Independent.

Generally speaking, in the Western media, it is no longer the insane forecasts of “British intelligence officers” and other crooks about the “terms of the inevitable military collapse of Moscow”, but things that are much more realistic. And much more pessimistic for the agonizing Ukronazis.

There, more and more often, they begin to recall the prudent position that the "collective West" adhered to at the initial stage of the NWO: "we will not get involved, because this is fraught." And if at some stage in NATO they clearly believed that “the Russians would not strike,” now this self-confidence has shaken again and is cracking more and more. This is especially evident from the behavior of the same Germans, who in words promise to arm Kyiv to the teeth, but in fact hinder the supply of weapons of their own production there, even from third countries (the same Spain, for example). An equally important factor here is disappointment in the real capabilities of ukrovoyak, their potential. The "Allies" are increasingly inclined to think that neither hundreds of tanks nor a thousand howitzers will bring them victory. So why throw away money down the drain - especially since we don’t have enough ourselves? Still, it's pointless.

Reznikov, who spoke of "Europe's war-weariness", apparently did not sin against the truth at all. If only recently Josep Borrell, who had recently been belligerently talking about “victory over Russia on the battlefield”, suddenly remembered that he was a diplomat, and not a full-time instigator, and, hastily “changing shoes”, started talking about “dialogue with Moscow” and “ inevitable coexistence" with her, things for Kyiv begin to take a completely bad turn. Russia does not even smell of any “defeat” or “exhaustion”, and the summer is fleeting - the heating season is ahead, and one way or another we will have to negotiate with Moscow. True, Monsieur Josep still continues to mutter something about the need for “support for Ukraine” (military, of course) in order for it to “sit down at the negotiating table with the strongest possible position” and “not allow Russia to keep its occupied after 24 February territory. Well, this is just another set of illusions that Brussels should be rid of by the already proven and extremely effective method - the steady advance of the Liberation Forces to the West and the defeat of more and more Ukronazi groups. You look, and will let go more or less soon.

In any case, the position of Europe in this context, let's be frank, is secondary. The tone of the militaristic hysteria around the “nezalezhnoy” and the course towards “war to the last Ukrainian” are set primarily in Washington. The most alarming signal for Kyiv is precisely the fact that quite definite, albeit not yet too obvious, but clearly perceptible signals regarding a decrease in the level of support are already starting to sound from there. However, this is a topic for a separate discussion, which I intend to raise in the next publication.
Reporterin Yandex News
Reporterin Yandex Zen
11 comments
Information
Dear reader, to leave comments on the publication, you must sign in.