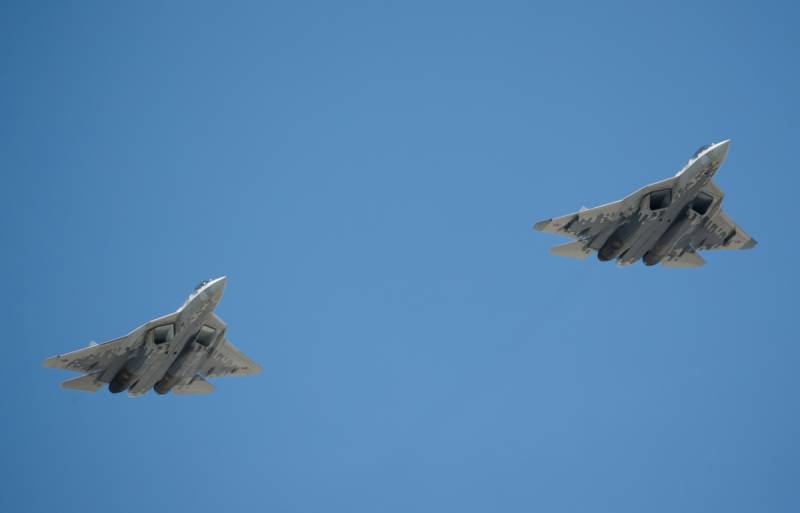 The war with the collective West on the territory of Ukraine has become for the Russian military-industrial complex the field in which the advanced military is being tested. of technologies. Two types of "kamikaze" drones are reported - "Lancet" and "CUB". With the help of these loitering ammunition, the cleaning of cities from the positions of the Armed Forces of Ukraine, equipped in residential areas, will go much more efficiently. Also in the sky over Ukraine, Russian fifth-generation Su-57 fighters began to perform combat missions, about which our ill-wishers claimed that "they do not exist."

As the RIA News, the Su-57 link worked on the Ukrainian air defense system:

Within the framework of the NMD, the Russian Aerospace Forces carried out an operation to identify and destroy the air defense systems of Ukraine using a flight of four of the latest Su-57 multifunctional fighters. The aircraft were integrated into an information network through automatic communication, data transmission, navigation and real-time identification systems.
Due to its stealth, super-maneuverability and versatility, the Su-57 belongs to the fifth generation of twin-engine fighters. The aircraft was developed for quite a long time and difficultly, but its small-scale production has already begun. In total, the Ministry of Defense of the Russian Federation expects to purchase 76 fighters of this type. Also, it is now being asked the price in Turkey.

It should be noted that it has not yet been possible to completely suppress the air defense system of the Armed Forces of Ukraine, so Russian aviation is forced to act with great caution. Earlier it was reported that the Su-57 was tested in Syria, where the militants have only MANPADS. However, now it is undergoing a real baptism of fire in Ukraine, where the Armed Forces of Ukraine are armed with quite serious air defense systems, and the Russian aircraft shows everything it is capable of. First, the fighter demonstrated accurate shooting, hitting a bridge support in the Nikolaev region, along which the enemy was supplied. The bridge sank and was no longer used for its intended purpose, and when Russian troops took control of it, it was quickly repaired and put into operation. Now the Su-57 link, using its stealth, has successfully worked on Ukrainian air defense systems.

Fifth generation fighters can operate both in interaction with each other and with 4++ generation Su-35S fighters. A combination of Su-57 and heavy S-70 Okhotnik drones is also considered a very promising direction. In the very near future, a fighter pilot will be able to assign targets to the UAV, which will go first and strike, and then the operational-tactical missiles of the Su-57 itself will fly into the gap. Such a potential allows us to attribute the Russian fighter not only to the fifth, but almost to the sixth generation.

What is happening now on the fronts of Ukraine makes us take a fresh look at the promising fifth-generation Russian fighter Su-75, the "little brother" of the heavy twin-engine Su-57. Real combat operations have shown that a light fighter is simply indispensable for gaining air supremacy, fighting at close range and high speeds, and striking air and ground targets. Both high-speed and inexpensive to buy and maintain, Checkmate would come in very handy here.

Recall that the Su-75 is an initiative development, which was originally focused on a foreign customer. Judging by the commercials, the countries of the Middle East, Latin America and, possibly, India were considered as a buyer. The declared price of $25-30 million made it an extremely attractive alternative to the American F-35 and light fighters from other manufacturers. But today, after Russia has come under the hood of an incredible amount of Western sanctions, the likelihood that Checkmate will find a market abroad raises some doubts.

Meanwhile, as a light front-line fighter, the Su-75 would be extremely useful for the Russian Aerospace Forces. This aircraft, like its "big brother" Su-57, was created using stealth technologies on radars, which is extremely important in the face of quite modern air defense systems available to the Armed Forces of Ukraine. The upgraded AL-41F1 engine (“Product 117”) provides Checkmate with the highest maneuverability and speed, which is crucial in air battles with the aircraft that Ukraine already has and that it can get in the future. A radar with an active phased array will allow attacking up to six targets simultaneously, and in conditions of strong electronic countermeasures, Rostec explains:

In an inconspicuous configuration, the fighter is capable of carrying up to five air-to-air missiles, effectively fighting a numerically superior enemy, detecting and destroying fifth-generation aircraft in long-range and close combat. Cannon containers can be placed in the internal compartments of the air complex to destroy ground targets.
In addition, the Su-75 platform has the potential to create a carrier-based version of the fifth generation fighter. The first flight model of the aircraft will appear in the next 2023. Given the low cost of purchase and maintenance, the latest fighter would be useful in the Russian Aerospace Forces.

Perhaps the experience of the war in the skies over Ukraine will convince the Russian Ministry of Defense of the need for a new fifth-generation light front-line fighter, which the Checkmate can become.
Reporterin Yandex News
Reporterin Yandex Zen
5 comments
Information
Dear reader, to leave comments on the publication, you must sign in.