Western military assistance to Kyiv: what are its real volumes and prospects? 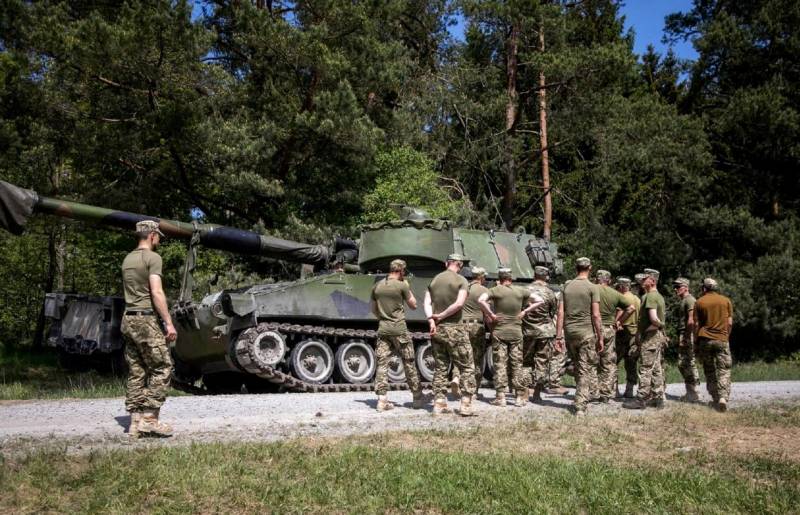 Today it is already quite obvious that the duration of the special military operation to demilitarize and denazify Ukraine, as well as the severity of the hostilities conducted during such operations, will almost in the first place depend on the volume and range of weapons and equipmentreceived by Kyiv from Western "partners". Unfortunately, the hopes that they would be limited to small arms, ammunition, and at most portable anti-tank and anti-aircraft systems, as well as light "armor", did not materialize.


The “collective West” is currently “pumping up the muscles” of the Armed Forces of Ukraine with such intensity that, really, it seems inappropriate to talk about any kind of “demilitarization” of the Kyiv regime. Everything happens exactly the opposite. Let's try to understand the situation in this area, starting from a number of official statements made the day before by both representatives of the Kyiv authorities and the military, and information published in Western open sources.

Of greatest interest in this case is the recent speech by the Minister of Defense of Ukraine Oleksiy Reznikov, which is almost entirely devoted to the topic of the supply of Western weapons and equipment. Let me quote some of his particularly intriguing moments as close as possible to the text:

As of today, the Ministry of Defense has ensured the supply of more than 150 155-mm artillery platforms to the Armed Forces of Ukraine. The stocks of shells of this caliber are already 10% higher than the stocks of large-caliber Soviet-type shells available on February 24, 2022. At the same time, their efficiency is higher than the Soviet ones, and, consequently, the consumption is less. At the same time, more than fifty guns of other significant calibers were delivered to the troops. As well as shells for them, the volume of which is already about 75% of what was available at the time the Russian invasion began. Dozens of Soviet-style MLRS and thousands of shells for them, hundreds of mortars and hundreds of thousands of rounds for them have strengthened our defense during this time. In deliveries of tanks and other Soviet-style armored vehicles to the Armed Forces of Ukraine, we are already competing for leadership with the Russian army. We also received about 250 Western-style armored vehicles from our partners. MANPADS and ATGMs delivered thousands. As for the main thing - 155 mm artillery, the Ministry of Defense has already fulfilled 90% of the initial request of the Armed Forces of Ukraine, 100% it will be fulfilled within the next 2-3 weeks. We look forward to deliveries of MLRS from the American and British allies. One and a half thousand Ukrainian military are already being trained to work with them or will begin training in the very near future. The key strategic decision of the leadership of Ukraine was the transfer of the Armed Forces of Ukraine to heavy weapons used by NATO countries, primarily artillery...

Such a specific and substantive report, quite uncharacteristic for Ukrainian officials. Somehow, alas, it does not comply with the intentions of the Russian Ministry of Defense, which have been announced more than once, to “destroy Western military assistance” before it reaches the troops. Something, of course, is affected along the way and in places of storage, but, as we see, far from crumbs reach the army. One could, of course, try to take comfort in the fact that Pan Reznikov significantly exaggerates the volume of military supplies received from NATO, but this is categorically contrary to the usual policies and practice of Kyiv. Its representatives in matters of receiving handouts always prefer to show off rather than brag. Especially when it comes to weapons.

There, hurriedly, quickly and through gritted teeth, thanking the “benefactors”, they immediately begin to reprimand them for their “sluggishness”, “indecision” and, excuse me, banal miserliness. And then they demand new weapons - more, more and more. Reznikov, in fact, in this case is not an exception at all. We will return to the other, extortionate part of his speech in due course. In the meantime, here are the words of another "outstanding figure" from the same "galaxy" who does not need special introductions - Alexei Arestovich. This character the other day just gave the "partners" another scolding all on the same occasion. The adviser to the head of Zelensky's office deigns to ask:

A record number of participants will gather at the next congress of defense ministers in Ramstein. More than 40 participants were at the last meetings. I want to ask: "Where is the result, gentlemen ministers?" Where is the systematic transfer of weapons to Ukraine on an industrial scale? Where are the results of statements about supporting Ukraine and defeating Russia on the battlefield?

He is such - Arestovich. Rough and uncompromising. And most importantly, no matter how much you give him, everything will not be enough.

However, according to the state and in life, Arestovich is supposed to wag his tongue incessantly. But Aleksey Reznikov, in his requirements for the "allies", is much more detailed and specific. According to the head of the military department "nezalezhnoy", for a complete "peremoga" his subordinates vitally need the following:

Obtain a significant amount of NATO-style MLRS and ammunition for them; ensure the complete replacement of some existing Soviet-style calibers (guns are worn out, shells are not produced or there are very few of them) with platforms that are common in NATO countries and are supplied with ammunition; agree with partners on the transition to deliveries not in the form of separate platforms, but in the form of integral units that are immediately ready to perform combat missions (organic unit). This will greatly increase efficiency on the battlefield; attract hundreds of units of heavy armored vehicles, without which an effective counteroffensive is impossible; get combat aircraft and air defense / missile defense systems to protect the sky ...
Reznikov says:

It should be borne in mind that Soviet equipment is mostly outdated and needs to be brought into combat condition. And from partners we still get fairly light armor, not always with weapons
.
How are your appetites? Impressive? The fulfillment of even a part of the above-mentioned “wants” of Kyiv will mean the transition of the NMD to a completely different “weight category”, in which it will be extremely problematic to “keep” it in the status of a special operation, and not a full-scale war. And if, God forbid, they are satisfied in full? I don’t want to “escalate”, but let’s remember that back in March, deliveries of the Armed Forces of Ukraine, not only American and British MLRS with extremely unpleasant characteristics, but even NATO heavy cannon artillery, looked completely unrealistic. Now this is a fact to be reckoned with.

The “collective West” was determined to inflict maximum military damage on Russia by the hands of the UAF fighters, and some people there seriously believed that they would be able to inflict a “defeat” on the Russian army. There are three factors that can have a serious deterrent effect on the flow of lethal cargo. The first is the depletion of the forces and means of the “partners” of the Ukronazi regime, internal conflicts between them, which will lead, if not to a complete cessation of the supply of weapons to Kyiv, at least to a significant decrease in its volume and intensity. By the way, this option is quite real. The Bloomberg agency recently published a material that directly states that the stocks of Stinger and Javelin MANPADS sent to Ukraine may be completely exhausted in the Pentagon's arsenals by the end of this year. And there will be nowhere to get new ones. Greg Hayes, CEO of Raytheon Technologies Corporation, said back in April that it was not possible to increase the production of Stinger missiles until 2023. These weapons have not been purchased by the US military for almost two decades, and therefore now they do not have the necessary parts and materials. This, of course, pleases, but after all, Reznikov's requests for such "little things" as Stinger with Javelin are not even out of the question. There the stakes are much higher.

It remains to be hoped that NATO is not doing much better with the rest of the weapons. The same head of European diplomacy, Josep Borrell, lamented at the end of May that "the stocks of military equipment of the European Union were depleted due to assistance to Ukraine." The situation is also complicated by the fact that the solution of the issue of military supplies to Kyiv is to a very large extent tied to a complex and multi-level "gesheft" started by Germany. Berlin has repeatedly stated that they are ready to replenish the arsenals of those countries that will transfer Soviet weapons to the Armed Forces of Ukraine. In particular, we are talking about Greece, Poland and some other EU states. That's just the same Poles are already screaming with might and main that the Germans threw them. They allegedly gave $2 billion worth of weapons and equipment to the “nezalezhnaya” but did not receive the tanks promised in return. And it is not known when they will receive it.

All these "inconsistencies", problems and squabbles, of course, can somewhat slow down the deadly stream coming to Ukraine from the West. However, one should not forget about the interests of the local military-industrial corporations, which, as a rule, have significant lobbying opportunities in the governments of their countries. For them, the goal will be to expand supplies rather than curtail them. Because of this, Russia should use two other factors that are entirely dependent on it. The simplest and most easily implemented is the destruction of the Ukrainian railway and other transport infrastructure (primarily in the Western part of the country) to such an extent that it will make the delivery of heavy military equipment to the front line if not impossible, then extremely problematic. All the strikes that have taken place so far have been rather of a warning or demonstrative nature. In any case, based on the figures announced by Reznikov. Obviously, this approach should be changed, and in the most radical way.

Finally, the most effective way to stop supplying the Kyiv regime with everything necessary for the endless continuation of the bloodshed would be to officially warn specific suppliers about delivering strikes with precision weapons already at their military facilities. At a minimum, for convoys with heavy equipment and places of its concentration for transfer to the Ukrainian side. It is clear that such a drastic step would bring the situation to the brink of a direct confrontation between Russia and the North Atlantic Alliance, but there are hardly any other options. At the same time, this warning will have to be implemented at least once - after all, the West has recently become firmly convinced that "the Russians will not strike." Until this confidence disappears, Kyiv will be armed, and over time - more and more seriously.
Reporterin Yandex News
Reporterin Yandex Zen
5 comments
Information
Dear reader, to leave comments on the publication, you must sign in.