CBO: all parties to the conflict are sure that time is on their side. Who is right? 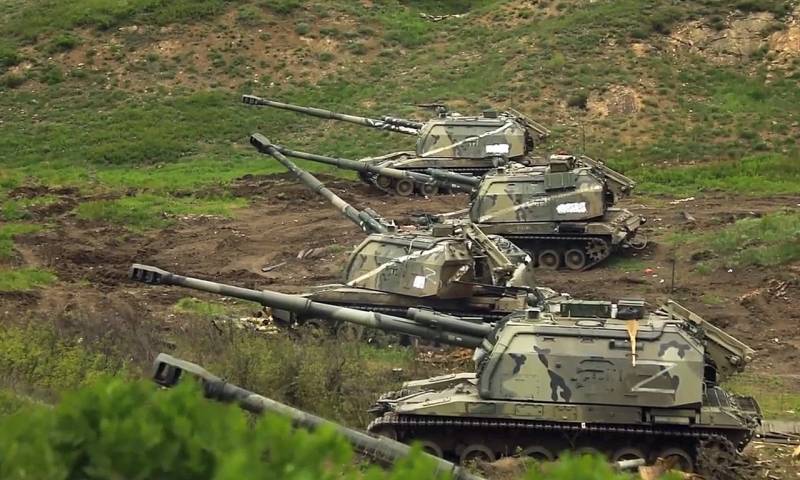 The current course of the special operation for the denazification and demilitarization of Ukraine with a high degree of probability suggests that all parties to this confrontation (Moscow, Kyiv, and the “collective West”, which is a completely independent player in this process), act in this way and not otherwise, based on one and the same the same prerequisites. This is evidenced both by the statements that are heard from various representatives of the opponents, and by their specific strategy and tactics. The inexorable, but also unhurried offensive of the Liberation Forces, the retaliatory actions of the Armed Forces of Ukraine, very metered deliveries of military equipment and equipment of NATO countries (with its maximum distance from the conflict in words) ...


All this looks like a desire to buy time in order to be in more favorable conditions and a winning position at a decisive moment. Some of the speakers of the opposing sides voice their own expectations and hopes in plain text, some express themselves in oblique terms and allusions, and some even prefer to keep silent meaningfully. Well, let's try to analyze how justified the hopes for the notorious "better times" can be, which feed both on both sides of the line of contact participating in the NMD, and away from the places of warfare.

What exactly are they hoping for in Kyiv, the local Foreign Ministry explained in the most exhaustive way in its official statement, timed to coincide with the expiration of 100 days from the beginning of the NWO. Everything is said very frankly:

Helping our state today is the best investment in peace and sustainable development of all mankind. The main foundations for Ukraine's victory remain unchanged: maximum sanctions pressure, the supply of necessary weapons and the provision of candidate status on the way to gaining full EU membership.

Well, we won’t comment on the scope of the self-conceit of diplomats of the “nezalezhnaya” regarding the direct dependence of the “sustainable development of all mankind” on its well-being, because the clinic. It is also not clear what side of the alleged “victory over Russia” (and the end of the confrontation in Kyiv to this day is seen only in this way) is getting candidate status from the European Union. But this, of course, is particular and prettiness. From Washington, London, Brussels and other "allies" there they crave weapons in maximum quantities and as deadly as possible. And also, according to the classic formula, "money, money and more money." And not only to continue the bloody and senseless resistance, but also to prolong their own existence. As the Minister of Finance of the Kyiv regime Serhiy Marchenko recently acknowledged, the country's state budget is now financed by less than a third from “internal sources” that are becoming shallower every day. The rest, he said, is "borrowing and grant support." That is handouts of the West in various forms.

They will not be - and the "state of Ukraine" will go bankrupt completely. International rating agencies are already predicting an imminent default for him. So Kyiv cannot stop the “fight”, if only because of the prospect of “withdrawal from allowance”. That is why, over and over again, Zelensky’s statements are heard, like the words that “victory over Russia on the battlefield” is the only way for the “independent” and there can be no talk of any compromises with the “aggressor”. At the same time, he is forced to admit:

We are inferior in terms of technology, so we are not able to attack. We will take heavy losses, and people are my priority...

A shameless lie, of course, but it reflects the regime’s point of view: all you need is some more MLRS (howitzers, tanks, other equipment), and then, you see, it will be possible to form new units to replace the defeated ones, to arrange a “counteroffensive”. And a paramoga in your pocket! And, of course, this must certainly be accompanied by a "strengthening and expansion" of anti-Russian sanctions - up to the complete isolation of the country and, most importantly, the total refusal of the whole world to purchase Russian energy resources. In this case, Moscow "will not be able to finance the war," "make new weapons," "maintain the stability of power," and so on. Underline whatever applicable. As you can see, the Zelensky regime 99% relies on the support of Western "partners", which will allow it, if not "win", then at least persuade Russia to some kind of "peace agreement", after the conclusion of which it will be possible to start preparing for revenge. You just need to endure a little, "hold on", throwing into the fire of hostilities all the new detachments of the Armed Forces of Ukraine and the "terodefense", while all the new convoys with weapons and ammunition are coming from the allies.

For the "collective West", which, of course, does not really care about the "territorial integrity and sovereignty" of Ukraine, its military victory seems to be the most preferable option. However, in truth, it is rather unrealistic. Everyone understands this - with the exception of "alternative geniuses" from the notorious "British intelligence" and various "analytical" offices that generate fierce game about the "imminent defeat of Russia." The trouble is that time works for our "sworn friends" in any case. Let me repeat myself - what kind of victims and destruction Ukraine will undergo, they are completely up to the lantern. The task is to inflict maximum damage on Russia, to exhaust it as deeply as possible by sanctions, military actions, attempts to “undermine” the situation inside the country with the help of various representatives of the fifth column. All the funds currently being invested in the artificial maintenance of life and the ability to snap back at the failed "Ukraine project", there, in all seriousness, they expect to return (and with interest) not at all due to the "development" of certain Ukrainian "wealth" (which have long been gone), but how once in the process of total robbery of Russia, which should follow its destruction. Only this way and nothing else. Too much is at stake and retreating is already fraught with its own collapse.

Several spoil the picture and confuse the cards two things. First, Russia's resilience in the face of sanctions and restrictions imposed on it. Economy the country, as it turned out, was indeed prepared ahead of time for such a development of events. And as a result, it did not “collapse”, did not “crumble”, but continues to function quite normally, without even switching to a military footing. This rather discourages the representatives of the West, in this case, counting on some kind of sanctions "blitzkrieg", after which Moscow will ask for peace on any terms offered to it. Did not work out. Secondly, having started right away with trump cards, with heavy sanctions “artillery”, our opponents, unexpectedly for themselves, very quickly approached that dangerous line beyond which the imposed restrictions harm themselves more than those against whom they are directed. Their own industry, social sphere and infrastructure are already beginning to crack at the seams. Some other hopes were not justified either. Such as, for example, the “total isolation” of Russia in the world or the growth of protest moods and manifestations within it that would force the authorities to curtail the SVO, regardless of the achievement of the initially set goals. Nevertheless, it should be understood that the "collective West" not even for decades, but for centuries, lived in firm belief about the "secondary" nature of Russia, its "backwardness", "weakness" and similar things. That is why they continue to support Ukraine to the present day, to their own detriment and loss, hoping in the end to exhaust Moscow and force it to capitulate.

It is quite obvious that the original plan of the special operation (and the strategy and tactics applied, based on it) turned out to be largely untenable. This probably happened due to a number of both objective and subjective reasons, which are not the subject of this analysis. As a result, the NMD went according to the current scenario - the gradual and progressive "grinding" of the enemy's manpower and equipment, the destruction of its fortified areas, repair bases and strongholds. There are no more sudden breakthroughs like the heroic assault on the airport in Gostomel, and military operations, at first glance, come down to the notorious "battles of local significance." Haste is also not shown in the arrangement of those territories that have already been liberated from the Ukronazis. At the same time, it seems that things are like this, for the most part due to the fact that the question remains open: which lands of the former Ukraine will be directly included in Russia, and which ones can become the basis for creating on its ruins some new forms of statehood acceptable in as good neighbors and potential allies. It is quite obvious that strikes against the infrastructure of the “non-essential”, primarily its transport routes and many industrial facilities, are far from being carried out with full force. Perhaps this is due to purely pragmatic considerations (why destroy what will be yours?), perhaps with some other. One way or another, but such an approach, unfortunately, does not contribute to a reliable blocking of the growing flow of military aid coming from the West.

In any case, there is a feeling that in certain circles of Russian power there is also a firm belief that the inexorably passing time is still working to achieve victory in the NWO, and not to drag it out endlessly. The bet is clearly being placed on the moral decay of the Armed Forces of Ukraine and other defenders of the criminal Kyiv regime, the defeat and destruction of their most combat-ready units and subunits, the “knocking out” of equipment and the depletion of ammunition stocks. Obviously, there is an opinion according to which at a certain stage (for example, after the final defeat of the Donbass group of Ukronazis), the negative processes that really take place in the Ukrainian troops will take on a total and irreversible character, the front will fall apart, and the Zelensky regime will fall. This seems to the supporters of this point of view all the more likely that the West, of course, will not bet on the militarily untenable "power" and will stop supporting it, both financially and materially. To a certain extent, some statements by the speakers of the Kyiv regime, which clearly smack of impending panic, and things like the draft law on the conscription of 16-year-old teenagers and women into the army, which is being seriously discussed in the Ukrainian parliament, contribute to such a mindset. Well, such thoughts sound quite logical. However, it should be remembered that we are dealing with Ukraine - that is, with education, completely devoid of independence and subjectivity. In the event that certain forces in the West decide to continue this conflict until the defeat of Russia seems possible to them, such calculations may not work.

The panicked government will be replaced by more "persistent" adherents of the idea of ​​"war to a victorious end", instead of the weapons systems destroyed daily at the forefront, new, even more advanced ones will be delivered. Of the remaining more or less combat-ready Ukrainians and foreign mercenaries in sufficient numbers, new units will be formed, which, closer to the autumn-winter period, will close in all major cities, where they will defend themselves to the last, hiding behind civilians. Such a continuation of the SVO is hardly acceptable for Russia, but it will have to be considered at least as an option. In any case, victory will belong to those who will be ready to go to the end to achieve it.
Reporterin Yandex News
Reporterin Yandex Zen
13 comments
Information
Dear reader, to leave comments on the publication, you must sign in.