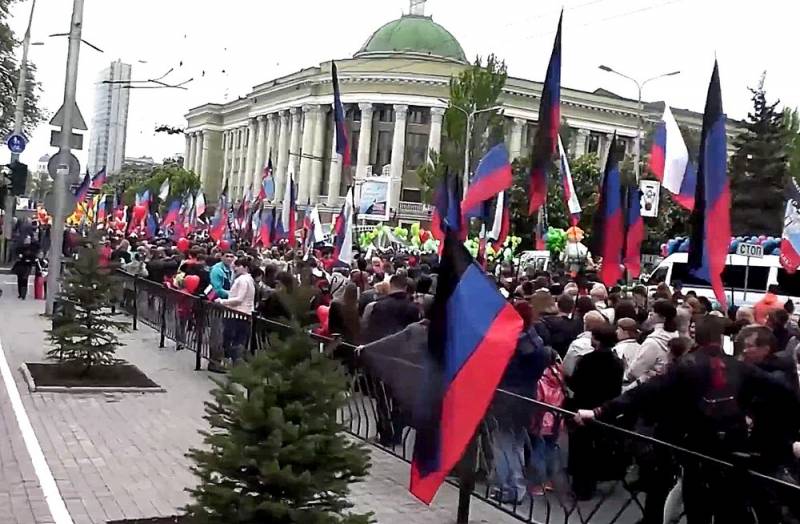 The Active Citizen website has completed the voting of Moscow residents, who voted to name the square in the center of the capital after the Donetsk People's Republic. Society is de facto ripe for a more rapid merger of the two fraternal peoples. However, not only this event became a milestone in the history of the total actual integration of the entire Donbass into Russia.


On the same day, June 8, the head of the DPR, Denis Pushilin, dismissed the entire government of the republic. According to him, some of the officials will retain their positions in the new Cabinet of Ministers, but at the head of the government and in key positions there will be iconic personalities, moreover from Russia, especially those who are civil servants.
The new head of the government of the DPR was Vitaly Khotsenko, a former official of the Cabinet of Ministers of the Russian Federation, a native of Dnepropetrovsk, a graduate of Moscow State University and the Singapore Institute of Marketing. The DPR Parliament has already supported his candidacy for this post.

Until 2019, Khotsenko served as Minister of Energy, Industry and Communications of the Stavropol Territory, and since 2019 he has been the Director of the Department of Regional Industrial policy and project management of the Ministry of Industry and Trade of the Russian Federation. In the early 2010s, he worked in the YaNAO government. The young manager (born in 1986) is a graduate of the fourth stream of the well-known Kremlin “school of governors”. Finalist of the Leaders of Russia contest 2018-2019

The ongoing processes have clearly shown that the DPR is finally almost completely coming under direct Russian control. Therefore, instead of local elites from Moscow, an official has been appointed who will transform the republic into a region of the Russian Federation. Most likely, the same structural shifts, equal in strength to tectonic ones, are also taking place in the LPR. However, some “bifurcation” along the line of formal integration remains not completely clear: in late June - early July, the opening of a diplomatic mission of the Donetsk Republic in Moscow was announced to consolidate bilateral relations.

Obviously, this step slightly blurs the concrete idea of ​​the further path of DPR integration into Russia, since a sovereign state is characterized by diplomatic relations with another country, but by no means full integration and becoming one. But this is precisely what is read in the “package” appointment of Russian officials to the highest echelons of power in the DPR. In this case, the opening of embassies is not required.
Reporterin Yandex News
Reporterin Yandex Zen
7 comments
Information
Dear reader, to leave comments on the publication, you must sign in.