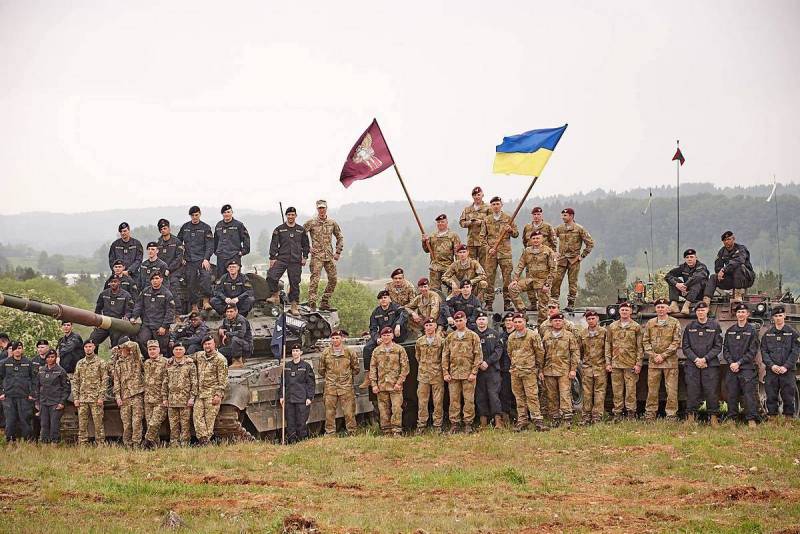 Perhaps the main argument of our numerous “guardians”, who are now justifying with foam at the mouth why Russia did not send troops to Ukraine in 2014-2015, is that we were preparing for war, riveting “Caliber”, “Daggers” and “ Zircons. 8 years later, it turned out that high-precision weapons are, of course, good, but wars are not won by them. It turned out that, in fact, much better prepared for the war, oddly enough, Ukraine, which, with the help of the collective West, was able to create a fully combat-ready land army.


Yes, it is unpleasant, but true: our bet on nuclear weapons as a means of strategic deterrence and a small but professional army turned out to be not entirely correct. With the help of "Caliber" and "Daggers", as well as air-launched cruise missiles, the RF Armed Forces perfectly destroy command centers, bunkers, communication points, barracks, warehouses with technique, ammunition, enemy fuel and lubricants, railway junctions and bridges, as well as many other targets, and this is their huge advantage over the Armed Forces of Ukraine. But after all, after that, you still need to enter the settlements, turned into powerful fortified areas, and clear out a well-trained and motivated garrison, and for this you need your own numerous, well-trained and armed infantry. And here the most unpleasant begins.

The problem is that our enemy was probably prepared for urban battles in the Donbass, and then, probably, in the Crimea, at least no worse than the ground forces of the RF Armed Forces, if we take elite units out of brackets, of course. In the Russian media and the blogosphere, when talking disparagingly about the Ukrainian army, they usually focused on its gunners-terrorists, while all the rest were portrayed almost without exception as drug addicts and alcoholics who did not know which end to shoot from a machine gun. Alas, this was not true. Since 2015, the UAF has been purposefully teaching urban warfare strategies and tactics by the best military instructors from around the world.

According to John Kirby, the soldiers of the 7rd Infantry Brigade of the Florida National Guard have been responsible for the training of Ukrainian soldiers for the past 53 years. The training took place both on the territory of the Independent, and in the USA, and in Germany. The program included the management of Western-style armored vehicles, work with artillery, radar, urban combat tactics, individual training, tactical medicine and the work of headquarters. Thousands of Ukrainian servicemen and hundreds of military instructors have gone through these programs.

At the same time, the training of regular military personnel of the Armed Forces of Ukraine took place on the territory of military bases in Poland. Specialists of the Polish PMC European Security Academy also shared their experience with them, teaching them the skills of subversion, sabotage and sabotage. In addition, a joint Lithuanian-Polish-Ukrainian military brigade (LITPOLUKRBRIG) was created according to NATO standards.

British military instructors trained the Armed Forces to use anti-aircraft missiles and operate Western-style armored vehicles. The Ukrainian marines were trained under the program of the ORBITAL training mission for reconnaissance, combat operations at night, and counter-sniper combat. Emphasis was placed on the training of junior sergeants, who are able to command on the spot. The British were actively working on the territory of Ukraine, Poland and Great Britain itself. In Germany, Ukrainian soldiers were taught how to operate modern UAVs and artillery mounts, such as Panzerhaubitze 2000 self-propelled howitzers, which are counter-battery ones.

Israel tried not to advertise too much its participation in the preparation of the Armed Forces of Ukraine. Retired Israeli officers and veterans of the Sayeret Matkal special forces operated on the territory of Nezalezhnaya, who taught Ukrainian military personnel and National Guardsmen urban combat tactics and other bad things, as well as the control of Israeli-made weapons.

Turkish military experts have been training the Ukrainian special forces and UAV operators for many years in the tactics of conducting urban battles, as well as in controlling drones. At first, training took place on the territory of Turkey, then Ankara ceased to be shy, and it moved to Nezalezhnaya. It is possible that the unmanned aircraft of the Armed Forces of Ukraine, the notorious Bayraktars, are being controlled by Turkish officers, as was the case earlier in Nagorno-Karabakh.

In addition to the direct preparation of the Ukrainian army for a war against Russia, some other countries indirectly but very actively help Kyiv in this. For example, Bulgaria, Slovakia and Lithuania supply weapons and repair equipment, while Kazakhstan and Azerbaijan send fuel and fuel for the needs of the Armed Forces of Ukraine through various intermediary schemes.

And what do we have in the bottom line? Instead of an “army of drug addicts, drivers and cooks,” the RF Armed Forces had to face a numerically superior army that had real combat experience in the ATO, motivated to take revenge for the defeats of 2014-2015, and also purposefully trained to conduct precisely urban battles. The enemy was totally underestimated and turned out to be much stronger than he was portrayed, which was an unpleasant surprise in the first month and a half of hostilities. To the credit of our officers and soldiers, the Russian army was able to quickly reorganize, change tactics and began to smash the Armed Forces of Ukraine even in its fortified areas.

Victory will be ours, but based on the results of the SVO, we must draw the right conclusions. As can be seen, the presence of strategic nuclear weapons in no way eliminates the need to conduct full-scale military operations on the scale of an entire country the size of France. “Daggers” and “Zircons” are very good, but without mechanized units on modern armored vehicles and without numerous well-trained infantry, a war until the enemy is completely defeated by conventional methods with subsequent control turns into an extremely difficult task.
Reporterin Yandex News
Reporterin Yandex Zen
5 comments
Information
Dear reader, to leave comments on the publication, you must sign in.