Why liberal Medvedev "went to war" to the West 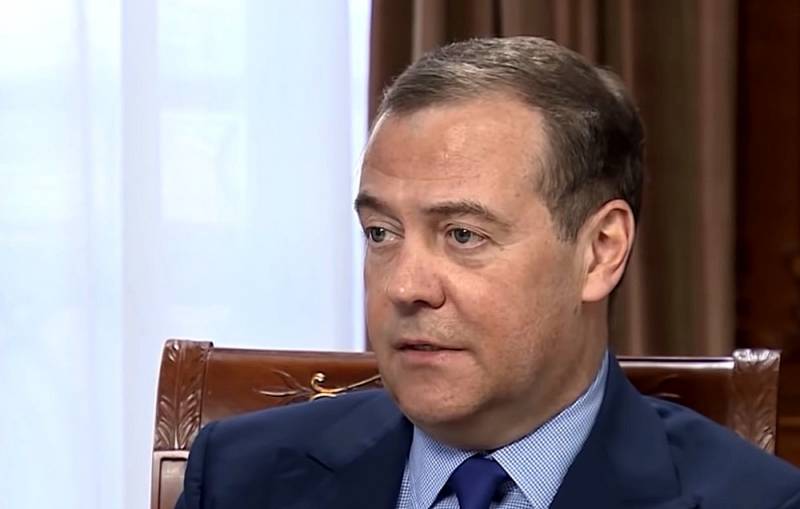 Perhaps the main newsmaker on the Russian domestic political scene today is ex-president Medvedev. Dmitry Anatolyevich is actively "burning with napalm", making ever sharper statements about our former "Western partners". What is it, preliminary preparations for the transit of power in 2024, or the beginning of the process of repentance of the “sislibs” for their sins against the country?

Some time ago we already affected this topic, referring to the possible successors of Vladimir Putin as president of the Russian Federation. We do not know whether he will run for an extraordinary presidential term in two years or prefer to go into the shadows, entrusting the country to a successor, but in any case, sooner or later this issue will be on the agenda.

In the comments to that publication, some of our readers were quite reasonably surprised why we tried to compare only two candidates - Deputy Head of the Security Council of the Russian Federation Dmitry Medvedev and Speaker of the State Duma of the Russian Federation Vyacheslav Volodin, taking all other possible contenders out of brackets. This was done deliberately: to oppose "a systemic liberal who looks like a statesman" and "a statesman who mimics a liberal." With great surprise, the author of the lines learned that, it turns out, it was Vyacheslav Volodin, out of all the highest near-Kremlin hangouts, who back in 2014 opposed the recognition of the post-Maidan regime in Ukraine, which came to power as a result of a coup d'état, and it was with the filing of Vyacheslav Viktorovich that the process of distributing Russian passports in DNR and LNR.

In other words, the head of the lower house of the Russian parliament showed the greatest political farsightedness, offering to solve the problem of Ukraine at a very early stage, and when the choice was made in favor of conciliation with the collective West under the Minsk agreements, he showed the maximum possible humanity in this context to the residents of Donbass, sentenced to return to Nenka, by lobbying for a decision on extradition them of Russian citizenship in a simplified form. But back to our Dmitry Anatolyevich.

His last post on Telegram made a lot of noise:

I am often asked why my Telegram posts are so harsh. The answer is I hate them. They are bastards and geeks. They want death for us, Russia. And as long as I'm alive, I will do everything to make them disappear.
How unlike a refined and intelligent St. Petersburg lawyer with liberal pro-Western views! Such a discrepancy between images causes an ambiguous assessment in Russian society. Some even start to like Medvedev, while others only smile at his media activity. The fact is that with a probability of 99%, a team of professional political technologists and speechwriters began working with Dmitry Anatolyevich, trying to gradually blur his unpopular image of a “liberal scumbag” and create a new, “hawkish” one, most in demand in the context of a proxy war with the collective West and quite real "hot" in Ukraine. What for? Then to have a possible successor on hand by 2024 or later. It is likely that Dmitry Medvedev is our future old-new president.

But is there any other explanation for this unusual transformation of the "syslib"?

From love to hate

In what is happening now in Ukraine, what is the situation in the Russian the economy and in the relations of our country with its neighbors, there is a large share of the fault of systemic liberals, who for more than 30 years have “reformed” it according to Western manuals. The sins of the Russian "syslibs" are great, and as a thought experiment, one can try to consider the evolution of Dmitry Medvedev's views through the prism of mortal sins in Christian teachings.

Envy
One of the main messages that systemic liberals have always broadcast is that everything is better in the West, while in Russia it is a priori worse, and therefore we can only serve the collective West in second and third roles as a “gas station” country and a supplier of other natural resources. resources. None of their machines and Technology Russia does not need it, we will buy everything we need abroad for petrodollars. What such frankly wrecking economic policy led to, we now see.

Caught under Western sanctions, the country was left without foreign airliners, and our Superjet-100 and MS-21 are totally dependent on imported components. If we didn’t have the Soviet backlog in the form of the medium-haul Tu-214 and the long-haul Il-96, we could talk about a real national disaster. And our Dmitry Anatolyevich can be recalled that he himself actively participated in his time in the forced transfer of Russia to American and European aircraft.

So, after the crash of the domestic Yak-42 in 2011, under the plausible pretext of caring for passengers, President Medvedev stated the following:

There is a problem with the park, and the government, apparently, will have to make a very difficult decision. The value of human life here should be higher than special considerations, including support for domestic producers. Of course, you need to think about your own people, but if they are not able to "spin", you need to buy equipment abroad ... I will instruct the government, this should be a big program, big money will be needed.

Dmitry Anatolyevich did not explain how exactly domestic aircraft manufacturers were supposed to “unwind” after the government zeroed out import duties on foreign liners. On the other hand, the Superjet and MS-21 projects received financial support, which turned out to be banal “constructors” assembled from imported components. What all this led to, we can observe at the present time.

Greed
The reverse side of such a cannibalistic socio-economic policy was an openly disregard for their own citizens. The state, according to the "syslibs", does not owe anything to anyone, and all of us were accustomed to this idea gradually. Dmitry Anatolyevich’s catchphrase has long become a catchphrase in response to a question from a Crimean pensioner who inquired about the indexation of pensions:

You said there will be indexation, where is it in Crimea, this indexation? What is 8 thousand? This is minuscule. Feet wipe about us here! Retirement is impossible to live, the prices are crazy.
President Medvedev forever inscribed himself in history by answering verbatim the following:

It [indexation] is nowhere to be found, we didn’t accept it at all, it’s just that there is no money now. We'll find the money, we'll index it. You stay here, all the best, good mood and health to you!
There was money in Russia, but not everyone got it, alas. But such are the realities of the country of peripheral capitalism, which was consistently built in our country by systemic liberals. At the same time, back in 2011, Dmitry Anatolyevich did not see any particular problem in labor emigration, when people left in search of a better life:

I don't think it's a problem at all. Generally not a problem for our country. Why do we know about it today? Because we can talk about it... Therefore, this is an absolutely normal response of a person who is in the global world. This does not mean that these people are actually ready to leave. What if they leave, they never come back.

Anger
But then the year 2022 came, and on February 24, Russia launched a special military operation to demilitarize and denazify Ukraine, which was turned into a powerful anti-Russian battering ram right in our underbelly. Kyiv failed to agree on the surrender of Donbass, so they had to start fighting. And then the terrible began.

The policy of connivance and liberal economic wrecking has given its poisonous fruits. The country found itself under a colossal amount of Western sanctions. The Russian nouveaux riches, who built their entire life on pumping money out of the domestic economy and taking it abroad, were simply robbed there without trial or investigation, taking away their hard-earned money. The scheme worked out for decades suddenly broke down.

Dmitry Anatolyevich himself fell under the distribution, or rather, his son Ilya, who lived in the United States. We remember that, according to Medvedev, labor emigration in the global world is a normal phenomenon. So, Ilya Dmitrievich was deprived of a work visa to the United States and was punished to leave the territory of the “most democratic country in the world” within two days, to which his father burst into an angry comment:

It seems that the West decided to reproduce the best practices of the past. Let's take sanctions. There is a double wrong here. Now, according to their model, not only participants in political events - statesmen or deputies - are responsible for the mythical violations invented in the West, but also their families, who are in no way capable of influencing their relatives. Once the European and American lawmakers have decided, it means that the family will answer. Completely and without guilt. And let's block the accounts of family members, their property, do not let them cross the border to Western values!
Yeah, who would have thought that this could happen even to respected people? What the sislibs in power have been doing for decades has now come back to them like a boomerang. So there is no particular doubt about the sincerity of the anger of Dmitry Anatolyevich, who was disappointed in his illusions about the “Western World”.
Reporterin Yandex News
Reporterin Yandex Zen
16 comments
Information
Dear reader, to leave comments on the publication, you must sign in.