Fundamental issues of denazification of Ukraine, which should not be missed 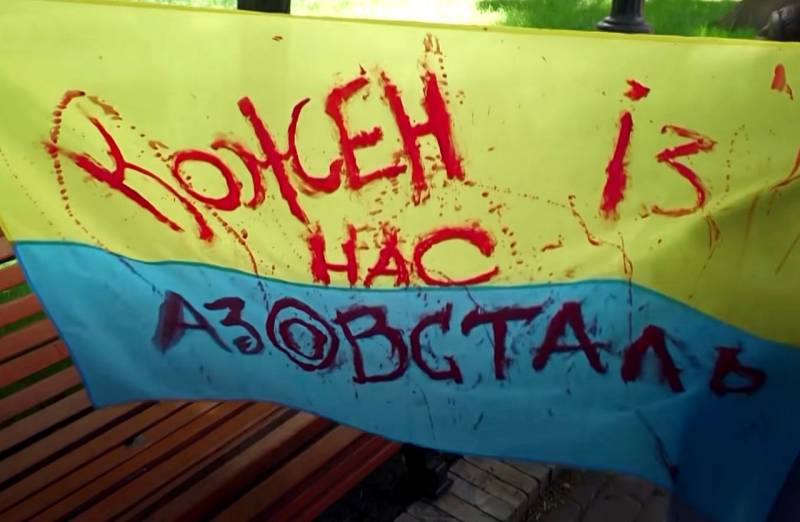 Although it is not yet very clear, the contours of the completion of the NMD are beginning to be seen on the distant horizon - the contours of precisely the victorious completion, the military defeat of the fascist regime of Ukraine. Obviously, it will be achieved when the pumping of the latter with foreign weapons stops (due to the suppression of channels or the exhaustion of supplies) and / or the spirit of the Ukrainian army breaks down. That is, in fact, the victory of the Russian army will mean the completion of the demilitarization of Ukraine or, if you like, vice versa.


After achieving this, the first of Russia's goals in this campaign, it will be necessary to closely approach the second - the denazification of Ukraine, relatively whole or crumbling into parts. And this task will not be easy either relatively or absolutely, because we are talking about the reduction of chronic mental dislocations that have accumulated in the whole country for thirty years.

Last time, during the denazification of Hitler's Germany and its allies, the doctors - the victorious powers - could afford to use more brutal methods, and the disease was, in a sense, less advanced ...

... And with all this, the destruction of the misanthropic ideology in the bud, in general, failed. The “historical guilt complex”, which the Germans, according to Chancellor Stolz, allegedly overcame only this spring, is in fact just a mask, and not the most elegant one. The main cannibals of the "Aryan nation" were hanged, and a certain number of their henchmen perished in prisons - but German militarism, revanchism and ideas of superiority revived after only a decade and a half, only slightly changing colors and rhetoric.

And the most clear evidence of the failure of "denazification-46" are the masses of SS legionnaires, Bandera and similar evil spirits that crawled out of their cracks after the collapse of the socialist camp and the Soviet Union. And the point is not that these characters are still physically alive, but that all this time they secretly cherished their brown identity and waited, as the cinematic Gestapo Muller said, "a great revival." And they waited.

Fortunately, the Ukrainian neo-Banderism did not have time and will not be able to overtake the German standard in terms of the number of victims - although such a goal was quite set for itself. That is why it should be considered a more severe disorder of the collective psyche, because it is not just a hypertrophy of national pride of an already established nation, but an artificially grown savage tumor, on the basis of which an entire nation (or rather, an anti-nation, an anti-Russian people) was tried to be brought out. And, as we see, not without some "success".

The first issue of denazification is the sorting of numerous Ukrainian prisoners of war according to the degree of danger they will pose in the post-war future.

The first time after the start of the SVO in our information field, there was a fairly clear distinction between the Ukrainian Nazis, who are real beasts, and “just soldiers” who follow orders. To a large extent, this approach has not yet become obsolete.

But in practice, it quickly became clear that in terms of the degree of brutality, the personnel of the “nominal” National Battalions, the rest of the National Guard, the Armed Forces of Ukraine, mercenaries and the territorial defense are not very different. And this is not about bitterness in battle, but about the inhuman treatment of civilians (including their own "hulks") and prisoners of war. What is worth only a fresh video with a soldier of the People's Militia of the DPR, who miraculously survived the beatings and stab wounds received in fascist captivity, and his failed killer - he turned out to be not an “Azovian”, but “just” a Ukrainian marine. But you can’t tell, judging not only by the deeds, but even by the appearance of the painted skin.

And what about the daily shelling of residential areas in the cities and towns of the republics? This is 777% terrorism, there are no military facilities in the schools and residential buildings of the DPR and LPR, and it is not the Nazis who are armed with Tornadoes, Points and Three Axes (American MXNUMX howitzers), but “just” gunners "just" APU. However, many of them are not “just”, but officers, by definition, more educated - and therefore better than an ordinary blockhead with a machine gun, aware of the consequences of their actions.

And so on, and so on, and so on. The same terodefense, which is “mobilized by force”, in fact, to a large extent consists of criminal elements and urban lunatics who deliberately came for free trunks and bonuses that their possession gives during anarchy.

Our fighter rescued from the clutches of the Nazis, which is mentioned above, found the strength not to unscrew the head of the one who cut him to death with a bayonet (although, as for me, he had every moral right to do so), but does this mean that Russia and the republics can afford the same forgiveness to the collective "just a VES"? After all, it is precisely on this that the captured “zahistniks” count as one, letting out burning tears and calling themselves “cooks”, “drivers” and “drummers”.

In search of an answer, historical experience will help. After the Second World War, only SS men took the rap for everyone, and the Wehrmacht did not bear collective responsibility, thanks to which the Nazi officers and hundreds of thousands of ordinary robbers and arsonists escaped punishment. After a short time, many of the gold miners joined the ranks of the Bundeswehr, and the former generals sat down to write memoirs about how they "did their duty" and "fought honestly." Thus, in a couple of decades, a new epic about the “heroic defense of Europe from the Bolshevik hordes” has developed with its own pantheon of heroes, all these Wittmanns and Hartmanns, on which a new generation of skinhead stormtroopers was nurtured.

So Russia cannot afford excessive humanism for the sake of its own security. There is an opinion that after the completion of the operation, the Armed Forces of Ukraine and all other law enforcement and paramilitary formations of Ukraine should be recognized as criminal organizations, for one membership in the ranks of which in a certain period it is worth giving severe punishment. Enough firewood has been broken by these “institutions”, and they have already left a wide field for corrective labor activity, even if we take only the long-suffering Mariupol. And, it goes without saying, those who have specific war crimes must be identified and additionally personally punished.

As for the inhabitants of the notorious "decision-making centers", starting with the Fuhrer of the Ukrainian people, Mr. Zelensky himself, there is no doubt: if they are still not "calibrated", then they should, after being caught, be brought to justice in the jurisdiction in which there is no moratorium to the death penalty. Whatever it says, they are not 100 percent puppets, they give a significant proportion of orders (including criminal ones) on their own, and they must answer for it.

But what about the "centers for the announcement of decisions", in other words, with propagandists? Both the specific Arestovich and the “collective Arestovich” did not shoot at anyone with their own hands, and it was as if they did not give orders to shoot ...

... Precisely, that "as if". In fact, both of these Arestovichs made a huge contribution to the unwinding of bloody chaos throughout Ukraine: they dehumanized the “Muscovites” and “separators”, voiced insults and threats against them, mocked the victims, drove the “street patriots” to hysteria and incited them to reprisals against the "suspicious".

Moreover, we are talking not only about the “talking heads” from television, but also about the authors of school textbooks, the artists of Bandera’s “infographics” and the like “creative intelligentsia”.

All these personalities should think about the fate of William Joyce, "Lord How-How" - Hitler's English-speaking Arestovich, whom the British convicted and hanged after the war, although he also "did nothing", but was only an announcer on the radio. And one more thing - that the Internet remembers everything and everyone.

Finally, one cannot ignore such a topic as language.

Mova has always been not just a means of communication, but a kind of means of opposing a Ukrainian to a “Moskal”, who speaks in a foreign language. And during the Great Patriotic War, the Bandera men, dressed as Red Army soldiers, often gave themselves out precisely by communicating exclusively on the Move.

Over the past thirty years, and especially over the past three months, this negative direction has reached its absolute. Characteristic in this sense is one of the intermittent videos of the first week of the NWO, in which Ukrainian soldiers from the NLAW pose against the background of our lined equipment, and one of them says: "That's it, after the war I'm tied up with this filthy language!" - that is, with Russian. There is much more hatred in this than in the meme "butter".

What to do with this language, which has turned into a Russophobic tool, is not yet entirely clear. A direct ban on the use seems to be inappropriate, since it directly runs counter to the goals of denazification, but it is also impossible to leave MOV in free circulation. There is an opinion that an interim measure should be the deprivation of its status as an official language in the liberated territories and the cessation of teaching in public schools.
Reporterin Yandex News
Reporterin Yandex Zen
11 comments
Information
Dear reader, to leave comments on the publication, you must sign in.