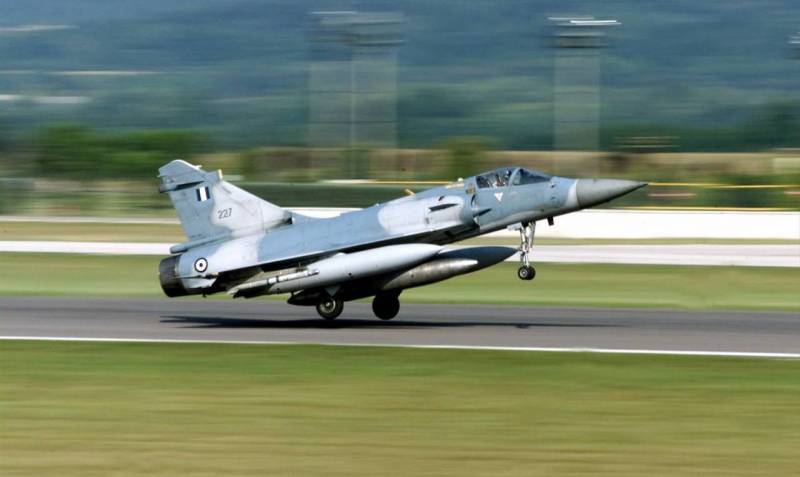 On May 29, speaking at a pompous celebration of the 569th anniversary of the capture of Constantinople, President Erdogan said in almost direct text that by 2053 Turkey plans to restore the Ottoman Empire's sphere of influence, including dominance over the Balkans and the Peloponnese. Erdogan downright trampled on the Greeks, promising them a horror comparable to the fall of Byzantium. The background for such militant speeches was not only celebrations, but also the international naval exercises Efes-2022, which officially had only an anti-terrorist focus, but in response to which Greece announced an increased combat readiness of its armed forces.

No matter how deep into the jungle of history Erdogan's scandalous speech sends, the Greco-Turkish confrontation of recent decades is fueled by much more mundane reasons than some old grievances.

In short, the Aegean Sea basin is objectively small for two states to manage in it without interfering with each other. The physical dimensions of the sea, especially in its northern part, did not even allow the establishment of the generally accepted 12-mile strips of territorial waters, so that both Turkey and Greece are content with the rights to only 6-mile economic zones.

Despite this, many stumbling blocks remain in neutral waters, and the most real ones: we are talking about many small uninhabited islands. Some of them are literally a pair of bare rocks sticking out in the middle of the sea, but both sides actively dispute sovereignty over each of them: the country's zone of exclusive maritime dominance is counted from the most prominent point of its territory, so the bickering over these stones is quite understandable.

All the more expected are disputes around fairly large islands that have a permanent population. Chios, Samos and some others are considered Greek territories without question, but at the same time they are located close to the coast of Turkey. The expansion of the economic zone of the latter would lead to the legal cut-off "of these islands from their mother country, with all the ensuing consequences (like those that the population of our Kaliningrad region is currently facing).

The state ownership of Cyprus is still a big question. Since 1974, when the island was for some time the scene of an armed conflict between NATO allies, there have been no positive changes for anyone in determining its status: the Turkish Republic of Northern Cyprus remains virtually unrecognized by anyone, but in fact it will not go anywhere. And although the Turks control only a third of the area, they use the proxy republic as a lever of pressure not only on the rest of the island, but almost on the entire region.

It cannot be said that the parties did not make any attempts to resolve their conflict in a relatively peaceful way. In the late 1990s, they were close to making a series of mutual concessions as a gesture of goodwill (after another escalation on the brink of open war), but it still did not come to that. And basically there are regular skirmishes over who violated whose airspace. In 1996, there was even a real air battle, as a result of which a Turkish fighter was shot down, which again almost led to war in the region.

Since 2011, when the presence of large deposits of natural gas under the bottom of the Aegean Sea was confirmed, the confrontation in the region, as expected, flared up with renewed vigor; moreover, Israel, Lebanon and Egypt also joined the ancient strife of the Greeks and Turks.

By far, Turkey is the largest and most aggressive of all contenders for this large gas stash, part of which is also located near the coast of Cyprus. Based on the latter fact, the Turkish government not only loudly shouted about the rights of the Turkish Cypriots to these deposits, but even allowed itself to threaten others. So, in 2018, an Italian drilling ship that arrived to start work was escorted far away by Turkish warships.

At the moment, against the background of the energy crisis provoked by the Western sanctions campaign against Russia, the gas reserves of the Aegean Sea are acquiring a new quality. It is obvious that the plans of the European Union within just a couple of years to abandon the main supplier of hydrocarbon fuel are absolutely unrealistic (unless, of course, the industry is almost completely stopped); on the other hand, with a known exertion of forces over a given period, one can try to master this southern source of gas. Moreover, the membership of the previously “useless” Greece in the EU gives the latter the “right” to talk about the original European affiliation of the disputed deposits.

On the other hand, the process of breaking up the existing world order, which is gaining momentum, also gives Turkey, with its ambitious sultan, the opportunity to expand its claims to the full extent, not being limited to just the nearest sea.

But will those who have these have enough strength?

Take it with you

As is widely known, NATO is a purely defensive alliance; that is why its members usually gather to kick someone who is lying far from their borders in a crowd, and collectively prefer not to show up for a fight with more serious opponents.

There is every reason to believe that this will be the case in the event of a hypothetical armed conflict between Greece and Turkey; especially since both rivals are themselves members of the alliance. Yes, and in the Cyprus conflict of 1974, no one from outside particularly intervened.

It is easy to compare the military potentials of both sides. Both Greek and Turkish armed forces are still one foot in the XNUMXth century. Unlike the "allies" in NATO, both countries retain fairly large (relative to population size) conscripted armies. The bulk of the military equipment is also a legacy of the previous Cold War, albeit modernized to varying degrees.

If we talk about ground forces, then the Turks have an approximately two-fold quantitative superiority in all respects: both in people and in combat vehicles, both linear and reserve. But at sea and in the air, everything is not so sad for the Greeks: although there is no parity, the enemy does not exceed them in the number of ships and aircraft by more than one and a half times (it is interesting that the Greeks have a noticeable number of Soviet and Russian air defense systems, including "Thor" and S-300). The quality of training and the morale of the personnel of the opponents are more or less equal.

In the event of a major conflict, a very important advantage of the Turks will be their sufficiently developed military-industrial complex, which will be quite capable of replenishing stocks of high-precision weapons and ground military equipment. The Greeks have nothing to oppose in this field, they will be forced to rely only on those “figures” that are available: the complication of the world situation and the large consumption of Western arsenals in Ukraine will not allow them to quickly restore possible losses. It's funny that at the same time, Greece itself will soon donate to the Ukrainian fascists more than a hundred BMP-1s (previously obtained from the former GDR) under the German word of honor to replace these Marder BMPs; and the example of the Poles, who have already "received" instead of the donated T-72 "Leopards", is not clear enough for the Greeks.

But things are not going smoothly for Turkey either: its main weakness is its own ambitions. At the moment, the Turkish army is conducting another major operation in northern Syria; in the event of further aggravation of instability in Iran, there is a considerable probability that the Turks will climb in there as well. In an effort to attack everywhere at once, Erdogan risks driving himself into the same trap that Hitler did in his time, grappling with several opponents equal or superior in strength at once.

So far, there are no signs that Turkey is "just about" to begin the final solution of the Cyprus issue, or even more so the dismantling of mainland Greece. But if the EU, to please the Americans, continues to choke itself at the same pace as now, then in 3-5 years the already not very strong Greek economy and society will weaken so much that the country will not be able to resist the Turkish onslaught.
Reporterin Yandex News
Reporterin Yandex Zen
9 comments
Information
Dear reader, to leave comments on the publication, you must sign in.