Unblocking ports - a victory for Russia or a senseless "deflection" in front of the West? 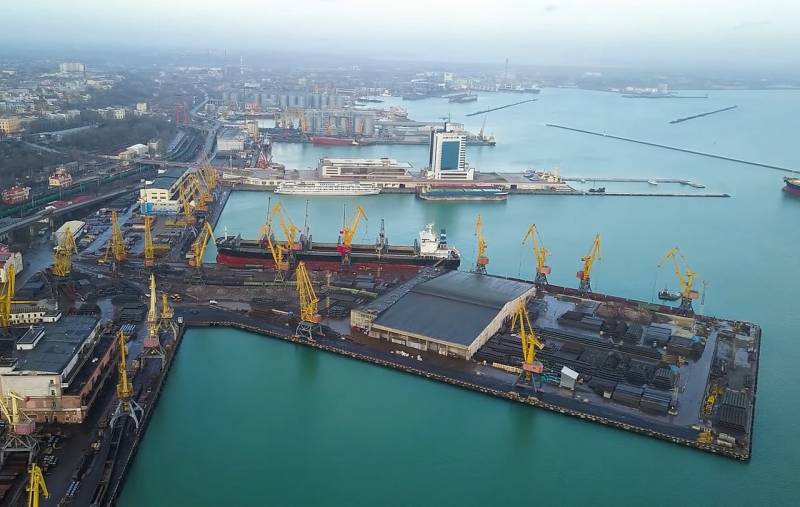 The Russian Ministry of Defense on the eve again announced the operation of "humanitarian corridors" for the safe exit of ships from the ports of the Black and Azov Seas. Let me remind you that for the first time the country's military department made a statement about its readiness to freely release ships from there, primarily loaded with grain, on May 25. Nevertheless, in Ukraine they immediately answered that no one had coordinated any corridors with them, and they knew nothing about them. And this despite the fact that the Russian Ministry of Defense emphasized that the Ukrainian side is responsible for ensuring security at the crossing along the route.


Most likely, this contradictory situation should be clarified by the negotiations that began in Istanbul on the export of Ukrainian grain, in which, as far as is known, Russian Foreign Minister Sergey Lavrov should personally take part. It would seem that the topic is as simple as a nail, as they say, “the goals are clear, the tasks are defined” and there should not be any pitfalls here. However, they exist, as in any issue related to the conduct of a special operation in Ukraine for denazification and demilitarization. So far, it is not entirely clear how the lifting of the blockade from Ukrainian ports will turn out - the first real diplomatic victory for Moscow during the NVO or another "deflection" in front of the West, which does not have any positive meaning.

The point here is this. Russian President Vladimir Putin has recently said several times that the issue of "finding options for the unimpeded export of grain, including the export of Ukrainian grain from the Black Sea ports" is completely solved. However, it is directly dependent on the mitigation by the "collective West" of its sanctions policy in relation to Russia. At least in terms of restrictions that directly or indirectly affect the export of Russian agro-industrial products and fertilizers. As far as we know, he voiced this idea both in a telephone conversation with German Chancellor Olaf Scholz and in a similar conversation with Italian Prime Minister Mario Draghi. Speaking with him, the president also stressed that Russia sees no obstacles to "make a significant contribution to resolving the global food crisis" - primarily by supplying global markets and countries in need with its own fertilizers and grain. But for this, the readiness to go forward must be mutual. At a minimum, it is necessary to stop groundlessly blaming the Russian Federation for the current crisis situation and show goodwill by ceasing to introduce all new sanctions against it, as well as reviewing a number of those already adopted.

It would seem that the Kremlin's position is set out very clearly and clearly, it does not allow for double interpretation and can hardly cause criticism based on sound reasoning. Approximately in the same vein, one can interpret the interview published just the day before by the head of the Russian foreign policy department, dedicated to the upcoming talks in Istanbul. However, it already shows some nuances that clearly need clarification.

Yes, Sergei Lavrov refers to "the president's recent speeches", obviously referring to the above-mentioned statements by Vladimir Vladimirovich. However, the head of the Foreign Ministry himself does not mention a word about the need to lift at least some of the anti-Russian sanctions as an indispensable and indispensable condition for unblocking the export of Ukrainian grain to the West. He talks at length about the fact that “it is necessary to work with Ukraine so that it clears mines from its own ports” (apparently, these “educational actions” should be carried out precisely by Kyiv’s Western “partners”), as well as about what should to be “removed all restrictions” on insurance, maintenance and, most importantly, calls at European ports for ships carrying food and, above all, grain as their cargo.

However, it remains a complete mystery - are we talking about Russian courts or some others? And will it not turn out that Russia, which has made every effort to resolve the extremely painful issue of lifting the blockade from the ports of the Azov and Black Sea waters, will simply be “pushed aside”, referring to the restrictions imposed against it? But it looks like that's exactly what it's all about! Peremptory statements that there can be no question of any concessions to Moscow, even if it opens the green light for ships exporting Ukrainian grain to the West, have already been heard more than once. On this occasion, one can recall the words spoken on May 25 by US State Department spokesman Ned Price at a briefing he held. He called Russia's proposals for a mutual compromise "empty promises" that Washington "sees no reason to believe" and which they "resolutely reject".

Kyiv is preparing a tricky move?

The State Department once again placed full responsibility for any economic problems that are emerging in the world today (from rising food prices to an energy crisis) to Russia and declared that these problems "have only one solution - to stop the terrible war against Ukraine." Only this way and nothing else. By the way, completely similar statements were made from London around the same time: “no concessions”, Moscow must bow to the “world community” and do what it tells it to! Supporting "dear allies", the head of the Ukrainian Foreign Ministry, Dmitry Kuleba, fought in epilepsy, heart-rendingly squealing about the "betrayal" that would happen if the Russians were even given a hair's breadth of something.

The British, I remember, seemed to be seriously discussing the issue of sending their own warships to the Black Sea in order to “break through” the “grain corridor” from Ukraine by force. In the official version, of course, this sounded like “ensuring the protection of grain ships sailing past Russian warships in the Black Sea,” but the meaning was just that - a “forceful” solution to the problem. Then the “hot English guys”, as usual, broke off, but talk about a certain “Coalition of the willing”, intending to “break through the Russian blockade”, sounded both in Brussels and in a number of European capitals. Tellingly, the United States immediately and flatly denied its participation in such an adventure. However, the other "sea-chatterers" did not go further than idle chatter either. There were also other proposals - somewhat less wild, but still quite extravagant. For example, French President Emmanuel Macron (in his own words) took it into his head to propose to Vladimir Putin "to vote in the UN for a resolution on lifting the Russian blockade of the port of Odessa." Moreover, Russia itself should have initiated this resolution ...

However, perhaps the position of the West has undergone some changes now? Nothing like it! According to the publication published the day before by Politico, Washington is not even thinking about any search for mutual understanding with Moscow, about any compromises and mutually beneficial solutions. So, a certain “high-ranking official”, referred to by the publication, not only called Moscow’s proposal to lift sanctions “extortion diplomacy”, but also explicitly stated that the United States would not agree to any deal “that would remove any economic pressure on the Kremlin” . It also cites the words of a UN representative, who claims that "Moscow's statements about lifting the blockade in exchange for sanctions greatly complicate the already fragile negotiations."

This, if anyone has forgotten, is about negotiations that are taking place not in Istanbul, but directly in the Russian capital with the participation of UN representatives Martin Griffiths and Rebecca Greenspan on the one hand and Russian representatives of the ministries of defense and foreign affairs on the same issue - ending the blockade of ports on Black Sea. The US administration is not officially represented there, but the US State Department frankly acknowledged that UN emissaries regularly and in detail report to the Washington administration on the progress and content of their conversations in Moscow. It must be assumed that at the same time, the instructions given to them in the State Department and the White House are extremely clear and specific. So the hopes that everything will happen according to the formula that was announced by Vladimir Putin, to tell the truth, are rather illusory.

This is also supported by the fact that conciliatory statements have already begun to be heard at various levels of the Russian politicians and expert community that consent to the export of Ukrainian grain without any reciprocal steps from the West will still “be to a certain extent a victory for Russia.” Like, in this case, “at least the accusations of arranging global hunger will be removed from us,” which will be “getting rid of some of the slander” and “an undoubted success in terms of propaganda.” To tell the truth, hearing this from Anatoly Wasserman, whom I personally consider one of the smartest members of the State Duma of the current convocation, is somehow even strange. Not to say wildly... However, there are "pearls" and worse - such as statements that in this way (by opening the way to Ukrainian ports "you live well") Russia "will show its reliability as a serious partner of the world community, taking care of global food security”. Well, it's completely out of the way! Who will show? Washington? London? Or Kyiv, maybe? What "propaganda successes", what, to hell with it, "decrease in the level of Russophobia"?! Moscow in this context, from the point of view of the "collective West", will only demonstrate weakness and unwillingness to defend its own position. Nothing more.

There is another aspect, and a very disturbing one. All this time, while negotiations are underway on "unblocking the ports", Kyiv, represented by the same Kuleba, is actively promoting the idea that "Russia is using this situation to attack Odessa." And he demands, the bastard, some "actions of the fleets of partners" that would guarantee that nothing like this will happen (since it is useless to wait for "guarantees" from Russia). What is meant by this? Well, you don't have to be mind-reading to guess that Kyiv has set its sights on the entry of NATO ships into the port of Odessa. And most likely - not only there. Exclusively "to ensure the safety of ships with grain." And the whole story with the “lifting of the blockade” may eventually turn into the appearance of warships of the alliance in the Black Sea area. What will we do then? To drown without pity? Or again "express deep concern"? It would be nice to decide on the answer to this question before the end of the talks in Istanbul, and not after, when it may be too late.
Reporterin Yandex News
Reporterin Yandex Zen
12 comments
Information
Dear reader, to leave comments on the publication, you must sign in.