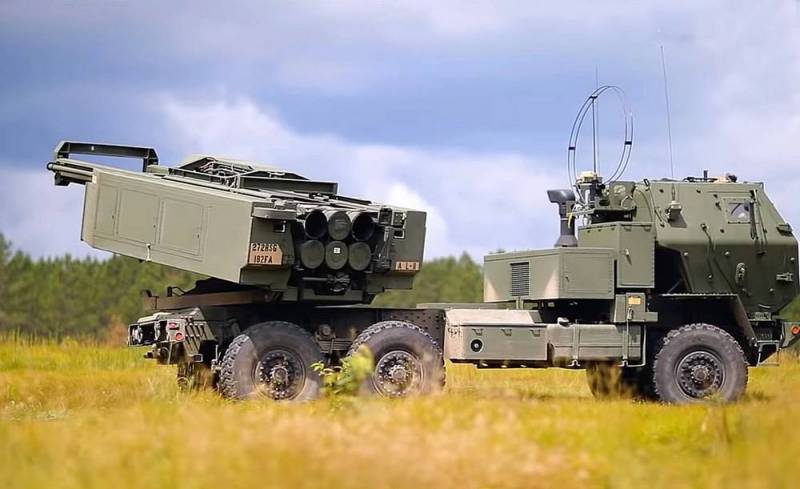 В past In the text, I promised to tell how we should respond to the American supply of long-range MLRS systems to the Kyiv regime. I'm keeping my promise. Believe me, with the US MLRS, not everything is so terrible. Just don't panic. They have nothing against Kostya Saprykin. We have something more terrible, and this is not at all tactical nuclear weapons and not strategic nuclear weapons, as some here have already gathered to use. We are waiting for the supply of NATO systems, we don’t care where to dispose of them, even in the 404th, even in Romania (18 HIMARS have been hanging around there since last year), no one else in Europe has them.

We are not afraid of the Gray Wolf!

Recently, the broad Russian philistine near-military public was alarmed when they learned that the United States was raising the stakes in our eternal confrontation, starting deliveries to Ukraine of the M142 HIMARS MLRS with the ability to hit targets at distances of up to 300 km. And although Grandpa Joe wrote a whole article in The New York Times to explain this, where he swears by his mother that he forbade his Ukrainian wards to shoot from it in Russia, and he only gives missiles to her GMLRS M30 with a range of up to 70 km, but faith he does not, because we all know well how his wards carry out his orders. And it makes no difference to us whether they will shoot at Belgorod with Bryansk or at Kherson with Donetsk, there is no difference. Both those and those are our territories, just some are recognized, while others are not yet recognized (but this is a matter of time, and we are working on it). From a formal point of view, we don’t even have anything to present to our non-brothers - there is a war going on, even though we call it NWO (I explained why this is so in detail in previous read the text, it will remove unnecessary questions), if we shell their territory, then why don’t they have the right to shell ours? This is war, and its laws are the same for both sides of the conflict. But we discussed the laws of war in last once, and today we will think about what to do and how to respond to the new demarche of our "partners".

The fact that they are deliberately raising the stakes, driving us into a corner, is understandable. And they will be able to keep us in limbo in the face of the threat of supplying their wards with even more long-range ammunition for this damned complex for a long time to come. For those who don't know, I'll explain. GMLRS M30, which Grandpa Joe completes his MLRS, is a guided 240-mm rocket with a cluster warhead, equipped with an inertial guidance system with the possibility of GPS-guidance in the final section of the route, with a firing range of up to 70 km. We have similar MLRS systems. This is the 9K57 "Hurricane" with a caliber of 220 mm and a maximum range of 35,8 km (we lose to the Americans in range, but we win in the number of missiles, we have 16 missiles in a salvo against 6 of our enemies). We also have a more powerful MLRS - this is the 9K58 Smerch with a caliber of 300 mm and a maximum range of 120 km, carrying 12 missiles in one salvo. Ukrainians also have similar (still Soviet) Smerchs, and our air defense systems regularly intercept them. The only drawback is that they do not have GPS guidance. But this option is equipped with our latest complexes MLRS 9K515 "Tornado-S", which is a deep modernization of the MLRS 9K58 "Smerch". The new system includes a modernized combat vehicle equipped with ASUNO and new 300 mm unguided rockets with a maximum range of up to 120 km, as well as adjustable a 9M542 rocket projectile with a detachable high-explosive fragmentation or cluster warhead and a combat range of up to 120 km (the developers of the Tula JSC NPO Splav are now working on a possible increase in the range to 200 km).

The abbreviation ASUNO means an automatic fire control and guidance system with its own GLONASS navigator in the launcher and a new computerized ballistic computer, which allows MLRS to fire at targets received through ESU TK in automatic mode, without using ballistics calculation stations (such as, for example, "Kapustnik") and without manual pickup mechanics. In addition, the developers have created new guided missiles with navigation using the GLONASS system for using the MLRS in a scenario similar to the Iskander OTRK (the same 9M542).

As of 2022, the Russian Armed Forces have 20 Tornado-S vehicles, and they are already being used in Ukraine. So we have nothing to be afraid of M142, grandfather Joe can just as well scare a hedgehog with his bare ass, the result will be the same. We are waiting for them and will gladly meet them. In terms of range of destruction, our MLRS systems have an advantage over American ones (120 km versus 70 km), in terms of salvo power - also (12-16 missiles versus 6) and in terms of KVO (probable circular deflection of the missile), believe me, we won’t lose face. In addition, all this time we did not stand still. Our gunsmiths have developed new ammunition for the Smerch, which the non-brothers do not have. So, in 2004 it was adopted thermobaric ammunition 9M55S. This is a rocket with a thermobaric warhead (warhead) 9M216 "Excitement". The explosion of one such projectile creates a thermal field with a diameter of at least 25 m (depending on the terrain). The temperature of the field in this case exceeds 1000 °C, the time of the existence of the field is at least 1,4 seconds (take my word for it, it will not seem enough to anyone!). The ammunition is designed to destroy manpower, open and sheltered in open-type fortifications and objects of unarmored and lightly armored military equipment. Most effective in the steppe / desert, as well as cities located on non-hilly terrain. The maximum range is 70 km.

But there is something further. So, relatively recently, 9M528 and 9M534 ammunition with a range of 90 km appeared in our arsenal. The first is a high-explosive fragmentation warhead designed to destroy manpower, unarmored and lightly armored military equipment in their concentration areas, destroy command posts, communication centers and infrastructure facilities. But the second is a missile with a small-sized reconnaissance UAV of the Tipchak type, designed to conduct operational reconnaissance of targets for 20 minutes. In the target area, the UAV descends by parachute, while scanning the situation and transmitting information on the coordinates of reconnoitered targets to the control complex at a distance of up to 70 km for prompt decision-making on the destruction of the reconnoitered object.

About 9M542 corrected rockets with a detachable high-explosive fragmentation or cluster warhead with a firing range of up to 120 km, I have already said above. So we have everything for the counter-battery fight against the American MLRS, it remains only to wait for ourselves. Grandpa Joe promised from his generosity to unfasten the whole 4 HIMARS complexes to the Ukrainian wards (you won’t have to carry far, 18 complexes are available in Romania). Waiting, waiting, waiting...

How to curb the appetites of the aggressor. My recipe

Grandpa Joe wants to blackmail us by raising the stakes? Conventional weapons, why not?! And he swears by his mother that his wards will not shoot at Russia. And if they do? How do we know what's going on with these rocket-wielding monkeys? It is one thing when these complexes are located in Romania, it is quite another thing when they are on the border with the Russian Federation. We have a long land border with non-brothers, you can’t put S-300 air defense systems under every bush. Moreover, the S-300 is an object air defense system, and the M142 HIMARS is a highly mobile system, how do you order to chase it?

Here, some hotheads have already suggested, for the purpose of prevention, to hit them with our tactical nuclear weapons, and if it doesn’t reach, then the strategic nuclear weapons. No, not right away! Politely warn first that in the event of a strike on Russian-controlled territories, our response to facilities in Poland will follow within 24 hours. And even attach a list of these objects so that the Poles have time to evacuate the population. The move is good, of course. Instantly removes unnecessary arrogance ... from the Poles. I have only one question - what about the Americans? Well, Poland will become a few cities smaller, Grandpa Joe will survive this, but after that Putin will be attached to the pillory as a war criminal, and then no one will talk to him and to us. No, guys, nuclear weapons are disposable weapons, they are buried, not frightened. That is why it kept humanity from a new world war for 77 years. I see that someone is eager to test the theory of Albert Einstein, who said that "he does not know with what weapons the Third World War will be fought, but he knows for sure that the Fourth will be fought with stones and sticks."

Poland is a member of NATO, after our nuclear strike against it, Article 5 of the NATO Charter on Collective Security comes into force. If you want to test the strength of Grandpa Joe's eggs, then attach to your threats a list of American cities and the same ultimatum of retaliation in 24 hours in the event of shelling from American MLRS of territories controlled by the Russian Federation. That's when Grandpa Joe will scratch his bald head. You won't be able to sit on the island anymore. There are no fools to get involved in an exchange of nuclear strikes. And is Ukraine worth it? I hope everyone here understands that after the first nuclear strike there will be a response, after which the next war will be in 500 years and will be fought, at best, with a bow and arrows.

Therefore, what I propose. To avoid such situations, when Ukraine, being in its own right (after all, it considers Crimea to be Ukrainian), sighs in Sevastopol or any other Russian city from the HIMARS MLRS delivered by the good grandfather Joe (and it doesn’t matter what kind of ammunition - long-range ATACMS or short-range GMLRS action), to publicly notify the Alzheimer's client that if this happens, our response to US military and civilian infrastructure will irreversibly follow within the next 24 hours after that. And let Grandpa Joe think whether it's worth it or not. It is possible, as an indicative measure, to sink some of our floating scrap in neutral waters adjacent to the territorial waters of the United States by hitting our missiles. If tov. Eun managed to intimidate the Dauntless Cowboy Trump in a similar way, then I don’t think that Sleepy Joe’s balls will be stronger. At the same time, I know for sure that our missiles fly no worse than North Korean ones (and most importantly, faster and farther!).