"On the old rake": they want to produce the MS-21 liner in a wide Eurasian cooperation 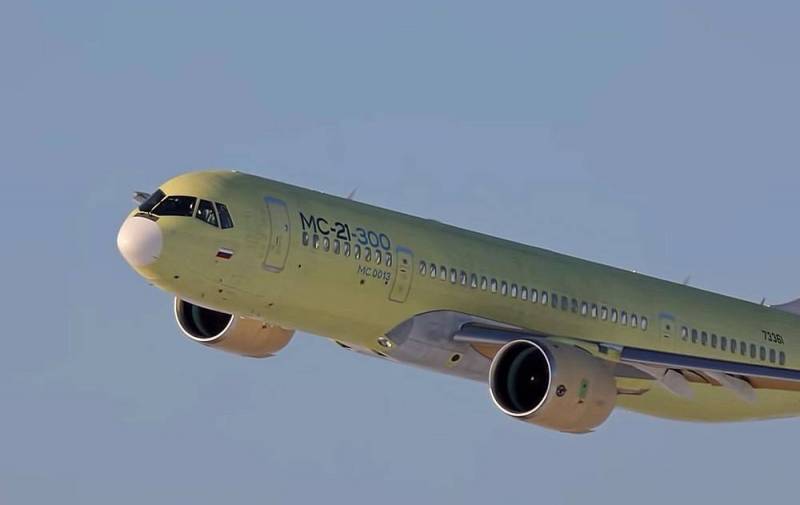 Left after the imposition of Western sanctions without the ability to purchase new and service already purchased aircraft of European and American production, Russia is forced to resume production of Soviet medium-haul and short-haul Tu-214 and Il-96 liners, respectively, as well as speed up the process of import substitution of foreign components for those considered promising MS- 21 and "Superjet-100". This is a necessary thing, but the first pitfalls that modern Russian aircraft can stumble on have already been outlined.

First about the good. The head of the Rostec state corporation, Sergei Chemezov, shared on the eve of truly Napoleonic plans, which, if realized, will mark the revival of the domestic civil aircraft industry. Particular emphasis was placed on the Superjet-100 short-haul liners, which we want to release like hot cakes on the market day:

This year, it is planned to deliver another 20 aircraft, and from 2024 UAC intends to consistently supply at least 20 aircraft of this brand annually. Add to this MS-21, Tu-214, Il-114. All these aircraft are in a high degree of readiness. In the future, by 2025, it is planned to put on the market over 110 liners of various types, by 2030 - more than 500.
Well, the plans are truly grandiose, and I really want them to come true. However, the bottleneck in the production of modern liners is the total dependence on foreign-made components. So, in the medium-haul liner MS-21, their share, according to some estimates, reaches 50%, in the short-haul Superjet-100 - 70%. This is the payoff for policies "broad international cooperation", in which Russian "aircraft of the future" turned out to be banal "constructors" assembled from imported components. As part of the sanctions regime, Western manufacturers refused to supply our products, which now need to be replaced somehow.

Also a big problem technical maintenance of several hundred airliners from Boeing and Airbus corporations, which refused to supply the necessary components to Russia. It is reported that five enterprises of the domestic aircraft industry at once - the State Research Institute of Civil Aviation, S7 Technics, the Ural Civil Aviation Plant, Aviation Engineering Solutions and the Navigator Aviation Instrument Engineering Institute - received certificates allowing them to develop and produce components for Boeing and Airbus liners, Naturally, without the permission of these companies. First of all, these will be such components as passenger seats, interior parts of the aircraft cabin, kitchen and other equipment.

The situation with the MS-21 and the Superjet is much more complicated, where half and three-quarters of the components, respectively, must be replaced. And here, it seems, we can again jump on the old rake.

The other day it became known that components for the promising medium-haul liner MS-21 will be produced not only in Russia, but also in all countries that are members of the Eurasian Economic Union. Artak Kamalyan, Minister for Industry and Agro-Industrial Complex of the EEC, spoke about this:

There are already proposals from the United Aircraft Corporation, from the Irkut Corporation for the production of a component base for MS-21 aircraft. It is proposed to produce an extensive list of components for all manufacturers of the EAEU countries in order to replace imports of everything that is currently possible on the territory of the union.
The EAEU, we recall, in addition to Russia and Belarus, also includes Kazakhstan, Kyrgyzstan and Armenia. The fact that Belarus has shown interest in participating in the production of MS-21, we detail told previously. After the collapse of the USSR, Minsk retained three large aircraft repair plants at once - the Minsk Civil Aviation Plant No. 407, the Orsha Aircraft Repair Plant OJSC and the 558th Aviation Repair Plant OJSC - where it is possible to establish the production of components and assemblies for civil aircraft. Moreover, Belarusian brothers even manage to independently develop drones and various equipment for aircraft at minimal cost. And how can Kyrgyzstan, Kazakhstan and Armenia be useful to the domestic aircraft industry?

In Astana, for example, in 2012, Kazakhstan Aviation Industry LLP was established, which provides maintenance and repair of military aircraft. In 2018, the company started its own production activities. It was planned to start assembling drones in cooperation with the Israeli company Elbit systems, as well as enter the civil aircraft industry segment, company representative Igor Sydzykov explains:

This is one of our key tasks. In this regard, we are currently working on the development of various segments of the civil aviation market. We recently had a visit from the Vice Minister of Industry and Trade of the Russian Federation. During this visit, the Republic of Kazakhstan was invited to participate in the implementation of a project to organize the assembly production of Baikal aircraft here. That is, the participation of Kazakhstan in the creation of this aircraft, the localization of the assembly of L-410 aircraft and participation in the creation of the L-610 aircraft. We plan to implement these projects jointly with the Ural Civil Aviation Plant.
In Kyrgyzstan, there is a branch of the Novosibirsk Aircraft Repair Plant, which is located near the Manas military air base. In Armenia, in the city of Gyumri, there is an aircraft repair military unit (aircraft repair enterprise) of the Armed Forces of Armenia, created on the basis of a civilian aircraft repair enterprise. That is, some technical groundwork and competencies are still available. The question is, how safe is it in our turbulent times to transfer the production of components to other countries, even within the framework of the EAEU?

Belarus - okay, it already has one foot in the Union State and has almost no chance to get out of deep integration, but what about the rest? Pashinyan rules in Armenia, while extremely dangerous internal political processes are underway in Kazakhstan right now, which can lead it to the path of Ukraine-2. The notorious Russophobe minister Askar Umarov is now responsible for information policy there, and his deputy Alexander Danilov, albeit an ethnic Russian, was a student of the Moscow School of Political Studies (foreign agent), which was financed by the Soros Foundation, and collaborated with Radio Azattyk, a branch of " Radio Liberty (foreign agent). The likelihood that, while still in friendly Kazakhstan, will soon "bang" is very high. Kyrgyzstan also has enough of its own internal problems that can easily be swayed to the point of a coup d'état.

So is it worth distributing the production of components to all five countries of the EAEU in order to be left without components for the MS-21 after the next “color revolution”? Does life teach you nothing? Or does someone want these projects to become permanent long-term construction? If so, then we will really fly on completely domestic Tu-214 and Il-96.
Reporterin Yandex News
Reporterin Yandex Zen
17 comments
Information
Dear reader, to leave comments on the publication, you must sign in.