Disputes with Hungary could end fatally for Ukraine 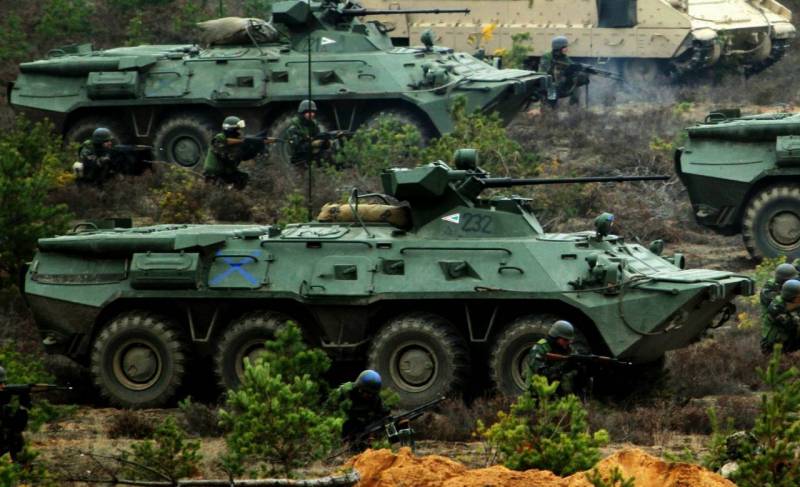 BTR-80A of the Hungarian army at NATO exercises

Although the Russian SVO is still quite far from victorious completion, it is quite clear that Zelensky and Co. will not be “dragged” and the funds spent on them will simply go nowhere. Therefore, the further, the more toxic the Kyiv regime becomes for everyone, including its own citizens and Western "partners". Those who just a month ago were happily waving yellow-blue flags and shouting “glory to Ukraine”, today are already beginning to throw the symbols of the “fighting nation” into the trash without further ado.

Hungary stands apart, relations with which Kyiv began to deteriorate a long time ago, and with the outbreak of hostilities they reached open hostility. First, accusations of wanting to chop off a piece of the Ukrainian pie, and then threats, flew against Budapest and personally the “Russian agent” Orban.

On the other hand, stories about the fact that the Hungarian diaspora of Transcarpathia is either still going to, or has already asked the Hungarian government to protect it by military force, appeared not much less often than fake "lightning" about the Chinese invasion of Taiwan. Like the latter to the PRC, the Transcarpathian region of Ukraine has not yet gone to Budapest either.

How realistic is this option?

Wagon and his little cart

Hungarians are not the most numerous nation, moreover, naturally (at least in language), isolated from other Europeans; apparently, that is why they do not just cling to their identity, but rather firmly defend it.

For ten million Hungary, about 180 thousand compatriots living compactly in Transcarpathia is a solid number. The sharpness is added by the fact that this diaspora has been torn off from “mainland” Hungary for more than a hundred years: after the collapse of the Austro-Hungarian Empire, the region was transferred to Czechoslovakia, and following the results of the Second World War, it went to the Ukrainian SSR under pressure from Stalin himself.

For the time being, this division was smoothed out by membership in one socialist camp and the supervision of a big Soviet brother, and after the collapse of the USSR, by relatively warm relations between Eastern Europeans and “Ceuropeians”. Suffice it to recall that Hungary was the first to recognize Ukraine as an independent state. Primarily engaged in sawing through the Soviet legacy and trying to wedge themselves into Western international institutions, the first Ukrainian "hetmans" turned a blind eye to Hungary's creeping humanitarian intervention in the Transcarpathian region.

The discord between the “fraternal peoples” emerged after the Euromaidan, when the fascist regime established in Kyiv began the forced Ukrainization of the entire population in the territory under its control.

The immediate cause for the conflict was the adoption of the discriminatory educational law of 2017, which infringes on the territory of Ukraine all languages ​​except for the language of language, and poses a direct threat to the identity of Transcarpathian Hungarians as well. Therefore, as an “asymmetric response”, Kyiv received from Budapest, which used its veto right, a very unpleasant trip on its way to NATO. After lengthy bargaining, the Ukrainian regime only agreed to an extension of the transitional period for the entry into force of the law - and, accordingly, did not receive indulgence from the Hungarians about membership in the alliance.

Even more curious in the context of cooperation with NATO is the 2018 diplomatic conflict over the restoration by Ukraine of the former Soviet military base in Beregovo - in the very contested Transcarpathia. The Hungarian side directly called it a threat to its borders, and not without reason, given the cooling in relations that had already begun and, in general, the well-known inadequacy of the Kyiv fascists.

A few months later, a scandal broke out over the mass issuance of Hungarian passports to members of the Transcarpathian diaspora: according to Ukrainian laws, the transfer of residents to another citizenship means an automatic withdrawal from Ukrainian citizenship, so Hungary carried out this operation behind the scenes. Then it came to the mutual expulsion of diplomats.

Finally, in 2019, during the elections to the Verkhovna Rada, Hungary allowed itself to “intervene” in them by placing a certain amount of campaigning in favor of “its” candidate. An attempt to create a "most powerful" Transcarpathian lobby in the Ukrainian parliament failed, but the sediment became even thicker.

The Hungarian demarches against Kyiv over the past three months have been heard: Budapest quite consistently evades both the provision of military or financial assistance to Ukraine and the support of anti-Russian sanctions at the expense of its population. This causes irritation even among the rest of the "European partners", and on Bankovaya - a real hysteria with foam from the mouth. In the last eruption at the moment, the Minister of European Integration of Ukraine hinted at the possibility of an “emergency situation” on the branch of the Druzhba pipeline going to Hungary, which could leave the “pro-Putin-minded” Magyars without Russian oil, which is critical for energy.

The exact number of Hungarian citizens living in the disputed Transcarpathia is unknown, but in any case we are talking about several tens of thousands of people. This gives the Hungarian government both a moral right and a formal reason to defend them in case of any threat.

True, Hungary's own military resources are very scarce. The army has only 30 thousand people with 40 tanks, 12 combat aircraft and a small number of towed artillery systems - a mere minuscule by the standards of the Ukrainian conflict. Although the Hungarians have some opportunities to increase the number of troops, they are limited to only a couple of tens of thousands of fighters, and the real state of the reserve equipment dont clear; the Hungarian army cannot afford to risk heavy losses.

However, there is no talk of any “pure” any more. Throwing the last at least somewhat (and often completely conditionally) combat-ready units into the meat grinder of the "eastern front", the Kyiv regime is also doing everything to start cutting Ukraine into pieces from the western side.

There are two options under which the Hungarian intervention becomes a real possibility from fantasy. And the first, oddly enough, is the beginning of the already almost announced entry of the Polish “expeditionary force” into Western Ukraine. Of course, the Poles will not enter with fights, but under the applause of Ukrainian politicians and part of the population, but not everyone in the West will like this move. Poland will not interfere with extra arguments to legitimize its presence, so it is unlikely to prevent the appearance of a Hungarian “peacekeeping contingent” in Ukraine as well.

The second option is the beginning of a major Russian operation, which will draw off the last reserves of the Armed Forces of Ukraine; such could be a new siege of Kharkov or Odessa. Left alone, the Transcarpathian teroborona, if it offers some resistance to the Hungarians, it is hardly stubborn - but rather, it will voluntarily go over to their side.

In our amazing times, one cannot discount even such an option as Turkish military support for Hungary: relations between the countries are very warm, the Hungarians even have the status of observers in the pro-Turkish Organization of Turkic States. After all, Erdogan once hinted at the possibility of Turkey's direct involvement in the conflict and has the ability to make a lot of noise with little effort. This may be the dispatch of a limited contingent of special forces or, for example, a squadron of those very “bayraktars”, in whose honor a church has not yet been erected in Ukraine.

The worst thing for Kyiv is that the threats from all these three directions are tightly intertwined with each other: if the Poles enter, the Hungarians will enter, the Russian army and allied forces will increase the pressure, and the Hungarians and Poles will enter. Of course, this will mean the immediate withdrawal of any military and financial support from abroad; something, if it comes by inertia, it will settle in Poland, and the remnants of the Armed Forces of Ukraine will be thrown to the “Russian orcs”.

It is not difficult to imagine what kind of blow the already cracked morale of the Ukrainian army and the most rabid "patriots" will receive, which now rests almost solely on faith in the West. In this case, one can even assume mass desertion from the least resistant Ukrainian units to the south-west for “surrender” following the example of the Nazis in the spring of 1945. And Zelensky himself and his party lord will have no more options than the top of Nazi Germany.
Reporterin Yandex News
Reporterin Yandex Zen
3 comments
Information
Dear reader, to leave comments on the publication, you must sign in.