Abandoned "Dream": who is responsible for the death of the An-225 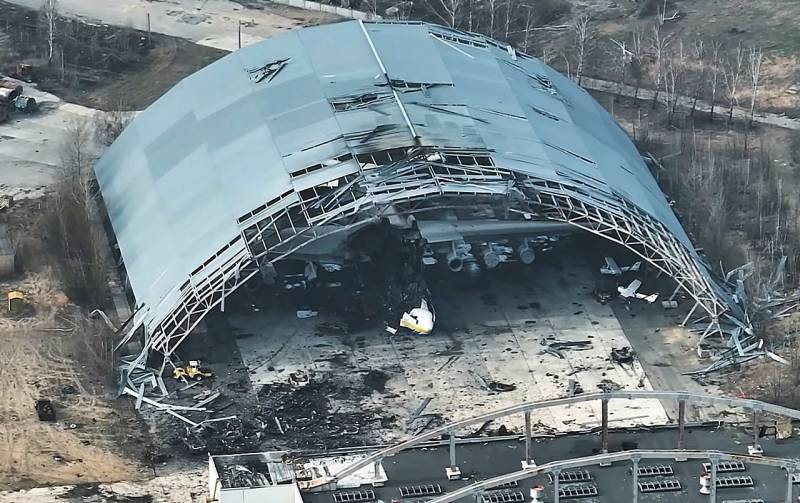 Recently, a number of media outlets, both Ukrainian and Russian, have been reporting on the fate of the An-225 Mriya giant aircraft, which was considered the most or at least one of the largest cargo vehicles in world aviation. Various versions are also voiced regarding the future of this particular "board", and "Mriya" as an aircraft building project as a whole.


All this, as usual in the "nezalezhnaya" mass media, is accompanied by various speculations, accusations and showdowns. Well, let's try to understand the events around the Ukrainian Mriya, relying on those sources that are more or less trustworthy.

Let's start, of course, with the question of the most acute and controversial - about who did destroy the "Mriya" during the battles for the Gostomel airfield "Antonov-2"? The Ukrainian side, of course, blames Russia for this, and asserts completely categorically, without even allowing a different interpretation of this issue, that this happened literally on the very first day of the NWO, February 24. At the same time, the video footage published on our resource, among other things, convincingly proves that the Mriya was in its hangar, with no clear signs of damage, at least three days later, on February 27. Moreover, this version is indirectly confirmed by the fact that the death of the aircraft was officially confirmed by the Ukroboronprom concern, which for some time now includes the Antonov State Enterprise, just after February 27, and not earlier. The message said the following:

The Russian army destroyed the flagship of the Ukrainian aviation - the legendary An-225 "Mriya". This happened at the Antonov airfield in Gostomel near Kyiv, where the plane was located. Its restoration will cost more than 3 billion dollars and will require a long time - more than five years. Ukraine will make every effort to ensure that the aggressor state pays for these works.
As you can see, the date of destruction is not indicated, which allows us to assume that the giant aircraft fell victim to the fire of Ukrainian artillery, which brought down a real barrage of fire on the airfield. Be that as it may, by and large, in this case, one cannot refrain from a cynical, but vital remark:

In fact, hostilities were fought in Gostomel, and extremely fierce. There, you know, people died - not like winged cars ...
Based on this, one cannot help but wonder why the Mriya, if it is so dear to Ukrainians, is one of the “national symbols” for them, a source of pride and almost worship, ended up where it ended up - in the zone intense armed conflict?

The question, believe me, is far from being idle, since all the other cargo "boards" of the branch of the air transport division (ATP) of the Antonov State Enterprise, known in the world as the Antonov Airlines, were relocated from Gostomel in advance. This was once stated by the commander of one of the three crews of "Mriya" Dmitry Antonov. He literally said the following:

Why did the plane stay in Gostomel? Because there was no decision to take the plane to another place. Let it be Poland - the nearest plane where we were. Leipzig. As early as January 26, there was an appeal to our head of the Antonov with a proposal, in the light of future events, to relocate our entire fleet to Leipzig, along with all personnel, crew, and spare parts. This question was not answered...
But he followed (and very quickly) to the "seditious" trick of the captain of the deceased aircraft. The company said the following:

The disseminated information about the indirect causes of the destruction of the An-225 Mriya aircraft is based solely on the personal opinions and value judgments of Dmitry Antonov, the commander of the Mriya crew. It is impossible to establish the key factor in the destruction of the An-225 due to the capture of the Antonov airfield by the armed forces of the Russian Federation.

And so that the pilot, who was very worried about his plane, would stop talking too much, in the same answer he was strongly advised to shut up. And they more than transparently hinted that otherwise it could end badly, writing that "the dissemination of unverified information during hostilities is unacceptable and harmful to the security of Ukraine." And one more thing - according to the official report of the same Antonov State Enterprise, five An-124-100 Ruslan aircraft are located at the Leipzig airport, where the work of the branch of the concern's air transport division is organized and a base for maintenance of these aircraft is equipped . This will allow us to continue fulfilling commercial and government orders for the transportation of extra-heavy and oversized cargo, as well as maintain our leadership position in this niche of the global market.”

That is, judging by these data, the transfer, and quite in advance, "Ruslanov" was carried out. What flights they are currently operating and with what cargo - everyone knows. More and more batches of weapons and ammunition are being transported to Ukraine to further fuel the military fire. One way or another, they were saved, and the Mriya was simply abandoned. Why did it happen? Most likely, a number of reasons played a role in this case. Firstly, runways for this "heavyweight" would not be found at every airport in the world. To be frank, it is only in a few of them. Secondly, to carry them self-propelled guns and boxes with shells and cartridges is an economically crazy idea. And serving him is not a cheap pleasure. The Germans accepted the Ruslans, having quite specific types for their use as military transport "sides". Well, "Mriya" ...

In truth, the fate of this legendary aircraft was tragic almost from the moment it was born. One of the last bright offspring of the scientific and industrial power of the Soviet Union, it was intended for not so much earthly affairs as cosmic ones. The carrier of "Buran" and "Energia", a winged vehicle that has no analogues, designed and sharpened for very specific goals and objectives. The collapse of the USSR and its space program was, in fact, a verdict for Mriya as a project - the second aircraft of this series remained unfinished. And not only (and, perhaps, not so much) because of the lack of funds for its completion, but because of its complete lack of demand in the miserable "post-Soviet space", and throughout the rest of the world. The gradual, at first slow, and then accelerating more and more rupture of industrial, economic and scientific ties between Kyiv and Moscow inexorably finished off Antonov, which was once among the flagships of the world aircraft industry. Well, not only him, of course.

In fact, there were simply no acceptable, economically viable tasks for Mriya. And Kyiv, with its ability to distort and defile everything in the world, turned it into one of its fetishes, insane symbols of “independence”, stubbornly calling it “the coolest Ukrainian plane in the world”, although the “Dream”, of course, was Soviet. And if it could serve as a real symbol of something, then only that which was irretrievably lost, squandered and squandered by Ukraine after 1991. Alas, what we all remember by whom, the words about the “real decommunization” of Ukraine turned out to be prophetic for this winged machine, vilely abandoned by its current owners. Not so long ago, a video was widely circulated on the Internet, in which the remains of the Mriya were removed from the airfield in Gostomel, which are no longer suitable for anything other than scrapping.


Subsequently, the Antonov concern published an angry refutation of the following content:

False information is widely spread on the Web about the removal of An-2 Mriya aircraft units from the Kyiv-Antonov-225 airport for the purpose of their further disposal. The video, which served as the basis for the dissemination of this false information, was filmed in a pirated way and distributed without the consent of Antonov State Enterprise and the relevant state authorities.
This could be believed if the primary source of the recording was not the most official Ukraine NOW public, where the video was accompanied by the following text:

Today, parts of the world's largest An-225 Mriya aircraft were taken for scrap from the airfield in Gostomel.
What kind of pirated video and unreliable information can be discussed in this case is deeply incomprehensible. By the way, the same text also mentioned the intentions of Vladimir Zelensky “to build a new Mriya after the war,” but somehow without confidence and special enthusiasm. The fact that this idea is completely unrealizable is clear even to non-specialists. This is just unreal.

On this occasion, Zelensky said this, bearing in mind Kyiv’s attempts to bring to mind the second copy of the Mriya, according to official data, “60% ready”, but in reality almost completely torn apart for spare parts for Mriya-1:

We wanted to build it, we needed $800 million. I approached the President of Turkey with a proposal to build a second Mriya, but we did not find the money. But in this case it's not a question of money, it's a question of ambition. This is a question of the image of our state and all the excellent professional pilots who died in this war ...
What does the “ghosts of Kyiv” sent by the Ukronazis to slaughter have to do with it?! However, asking the president-clown such questions is obviously useless. Much more realistically, the essence of the issue was stated by the same Dmitry Antonov, the ex-captain of the deceased Mriya:

Of course, if we try to evaluate economic expediency - it will be very difficult. Because under it you need to find an appropriate project, similar to launching a rocket into space. But there is no project yet. I think that, at the initial stage, Mriya will certainly not be created as a commercial project, but as a symbol.
Symbol of what, sorry?! That nightmare and horror to which this unfortunate land has been brought by three decades of its “independence”?! It is impossible to restore a crashed plane in any way. For "completion", and in fact the creation from scratch, "Mriya-2" will need not 800 million, but 3 billion dollars at least. In the mouths of representatives of the agonizing "state", such projects do not even sound funny, but simply wild.

When this material was being prepared, it became known that the SBU detained the leading design engineer of the Antonov airline. For what? For "support for a special military operation of the Russian army." According to the prosecutor’s office of the Kyiv region, “during March-April 2022, having pro-Russian sentiments, he distributed publications on social networks aimed at supporting Russia’s actions, a map of Ukraine, on which part of its territories allegedly began to belong to neighboring countries. As well as messages like “There is no such country as Ukraine. There is the outskirts of Russia”, “For ours” and “Power V to the truth”. So there will be no new Mriya for Kyiv. "Dream" on the revived in commonwealth with Russia "Antonov" can be born. But for this, Ukraine must cease to exist with its insane and bloody “dreams”.
Reporterin Yandex News
Reporterin Yandex Zen
2 comments
Information
Dear reader, to leave comments on the publication, you must sign in.