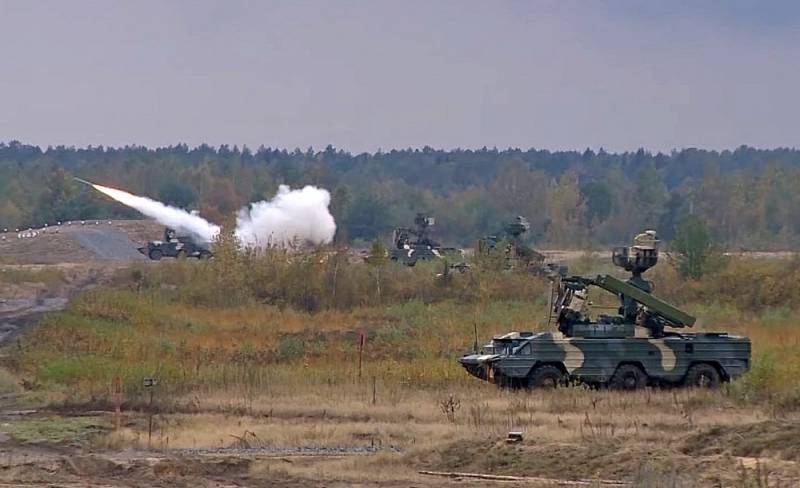 In the Western media, the topic of the possible entry of Belarus into a special operation on the side of Russia, the creation of a buffer zone in Western Ukraine, and even the capture of Kyiv by the Armed Forces of the Republic of Belarus has been actively dispersed lately. Knowing the caution of the Old Man, who himself will not climb into hell, and also given the retreat of Russian troops from the north of the Chernihiv and Kyiv regions, such insinuations seem like nonsense. But only at first glance.


From the very beginning of the NWO in Ukraine, neighboring Belarus has taken a very ambivalent position. On the one hand, the troops of the republic do not directly participate in the process of liberating the Square. On the other hand, Minsk provided Moscow with its territory for the transfer and deployment of huge contingents for their subsequent attack on Kyiv in February 2022. At the same time, the Belarusian army acts as a buffer to fend off a possible flank attack on the Russian one. In other words, Belarus is still participating in the special operation to demilitarize and denazify Ukraine, albeit indirectly, as our “Western partners” do not forget to regularly remind it of. But is it possible for Minsk to directly get involved in this proxy war with the NATO bloc on the territory of Nezalezhnaya?

Why is this Dad?

First you need to figure out why the cautious Alexander Grigorievich might need this at all. There are several reasons for this.

At first, let's not forget that what is happening in fraternal Ukraine cannot but affect normal Belarusians in the same way as Russians, and adequate Ukrainians. The Three Sisters monument recently demolished by Zelensky's criminal regime symbolized the commonality of all our Slavic countries. President Lukashenko, no matter how seasoned and practical he may be, is a Soviet person, like most citizens of Belarus, despite the numerous “zmagaria” and “liberda” that have bred there, who drown for Nazi Ukraine.

Secondly, it should be borne in mind that Belarus has already de facto opposed Nezalezhnaya, providing its territory for the deployment, supply and subsequent movements of Russian troops. Kyiv remembers this very well, and if the special operation through the efforts of the “collective Medinsky” ends with an unintelligible intermediate result, Minsk will receive a dangerous hostile neighbor on its southern border, which has a large and, as it turned out, very combat-ready army. A real military and terrorist threat will arise for peaceful Belarus.

Moreover, President Lukashenko should be alarmed by plans for the unification of Ukraine and Poland, which are increasingly beginning to be implemented. Thanks to a new bill initiated by the national traitor Zelensky, citizens of the Republic of Poland will be able to hold positions in the civil service, in the police and the army of Ukraine, even without having its citizenship. That is, in fact, there is a “soft annexation” of the former Square with the permission of its own authorities. Now Warsaw has come up with an initiative that the financial center, which will accumulate billions of dollars for the restoration of Ukraine, should be located not in Kyiv, but in Poland itself. Ukraine is losing the remnants of its sovereignty right before our eyes.

How does Minsk view the fact that Poland will de facto, and then de jure, increase at the expense of Ukrainian territory, reaching the border with Belarus not only from the west, but also from the south? They probably look bad, if, of course, there are people in power with statist thinking, defending the national interests of their country.

Thirdly, speaking about national interests, it should be remembered that Belarus itself can receive a certain “prize” for active participation in a special operation. While in Warsaw they are asking the price of the Eastern Crosses, and in Moscow - of the South-East of the Nezalezhnaya, Minsk could enter the territory of Volyn and, in the division of Ukraine, increase its territory at the expense of it.

How can this happen

Let's see what Belarus has already done in order to be able to join the hostilities.

The armed forces of the Republic of Belarus are small, but well trained and armed. As President Lukashenko stated, if necessary, up to half a million could be mobilized from the current 70 thousand people under arms. As we already told earlier, long before Ukraine and Poland, Belarus was the first to create its own Territorial Defense Forces (TerO), the number of which reaches 120 thousand people. On May 26, President Lukashenko announced the formation of a new southern operational command:

Unfortunately, a new direction has opened up, as we usually say, a new front. We cannot but pay attention to this. As far back as last year, the Minister of Defense suggested that we open another operational command in the southern direction of our country. Now, along with the west, the northwest will be the southern wing.
Southern is just the Ukrainian direction, if someone did not understand. A day later, on May 27, the question of creating some kind of "people's militia" was raised in Minsk, as stated by the country's defense minister Viktor Khrenin:

This question is really, we see, very necessary. The most important thing is that we have both people and weapons for this.
Why an additional "people's militia" is needed, when there is both the RF Armed Forces and the TerO for local defense, is not clear. Rather, everything falls into place if in this form Belarus intends to legalize its volunteers who are ready to go to fight for the liberation of Ukraine from the Nazi invaders. It is reported that a special regime has been introduced in the regions bordering with Northern Ukraine.

It is not difficult to imagine how Belarus can join the special operation. When it is considered in Minsk that the “soft Anschluss” of the former Independent from Warsaw goes too far, the RF Armed Forces and the “people’s militia” will go to Volhynia, cutting off the supply routes of the Armed Forces of Ukraine from the NATO bloc. At the same time, control will be taken over the Rovno nuclear power plant and, probably, the Chernobyl nuclear power plant. Naturally, the Belarusian troops will not storm Kyiv because of complete senselessness. The Ukrainian capital will surrender itself, finding itself in complete isolation.

All this will become possible after the defeat of the Donbass grouping of the Armed Forces of Ukraine, the capture of large cities in the South-East, from Kharkov to Odessa, by Russian troops into an operational encirclement with a gradual extrusion and forced surrender of the remnants of the garrisons.
Reporterin Yandex News
Reporterin Yandex Zen
32 comments
Information
Dear reader, to leave comments on the publication, you must sign in.