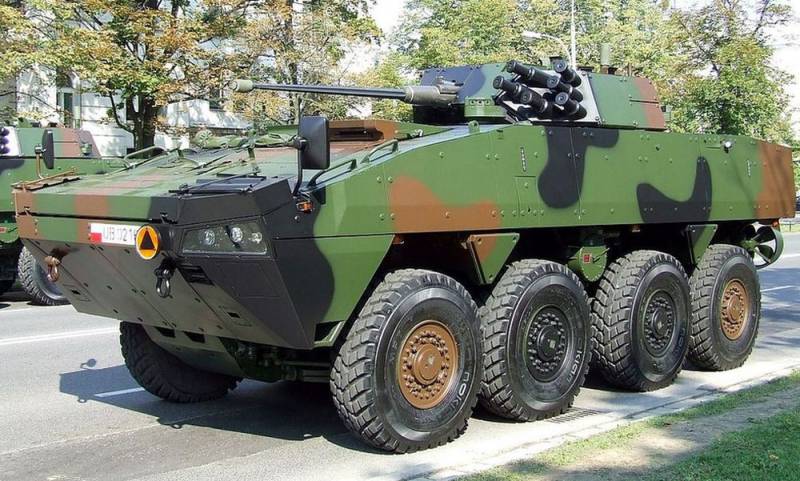 A video appeared on the web showing the movement of a large column of the Polish military equipment on Romanian territory. The scene is the city of Braila (Braila), located on the banks of the Danube River in the Wallachia region, not far from the triangle of borders between Romania, Moldova and Ukraine.


It should be noted that the seen column consists of modern equipment, and not of samples of the Soviet period, which Poland has been transferring to Ukraine for some time to confront Russia. It has the corresponding symbolism, which indicates nationality. A significant part is represented by Rosomak wheeled armored personnel carriers, which were produced in many modifications and subsequently modernized in Poland based on the licensed basic version of the AMV XC-360P, developed by the Finnish company Patria.


Most likely, we have before us the Polish contingent, which participated in the exercises of the Trojan Footprint Special Operation Forces of 22 NATO countries, which took place on the territory of Romania from May 2 to May 13, but for some reason delayed after they ended. However, when the video was made is unknown. At the same time, there are several assumptions on social networks that are worth considering, why exactly a unit of Polish troops could be on Romanian soil.

First, the Poles keep their equipment in Romania to strengthen the weaker partner in the alliance. However, this looks strange, since for several weeks now they have been really hysterical that they “were terribly weak because of the shameless Germans who cynically threw them away” without donating Leopard-2 tanks in exchange for more than 230 units of old Soviet T-72s that Warsaw handed over Kyiv. Therefore, the experience of the Poles about the security of the Romanians can be forgotten.

Secondly, Poland is going to equip Ukraine with this equipment so that it can launch a counteroffensive on Serpent Island and recapture it from the RF Armed Forces. This assumption looks doubtful and can be considered only in the theoretical plane. The thing is that the presented equipment is very expensive and the Poles are unlikely to give it to Ukrainians in principle. They can also transfer equipment across the Polish-Ukrainian border, that is, it makes no sense for them to drag it several thousand kilometers to the mouth of the Danube, so it will soon return to Poland. We remind you that the Poles have about 1000 BPM-1 units.

Thirdly, Poland needs equipment for some actions in the foreseeable future on the territory of Ukraine or Moldova. For a century, Europeans themselves have called Poland the hyena of Europe. This is a well-deserved nickname, so any provocation can be expected from Warsaw. If there is an aggravation between Chisinau and Tiraspol, the Poles, together with the Romanians, may well send their unit to help Moldova against Transnistria. As for Ukraine, in the event of the planned entry of Polish troops into the Volyn, Lvov and Transcarpathian regions, the same fate may befall the Odessa region. It is not only important for Kyiv to maintain control over the ports of the Odessa region, Warsaw has long been promoting the Trimorie project or the Three Seas Initiative.

Which of the available assumptions will turn out to be true will become known in the foreseeable future.
Reporterin Yandex News
Reporterin Yandex Zen
2 comments
Information
Dear reader, to leave comments on the publication, you must sign in.