"Condemn in order to exchange." The strange denazification of Ukraine from the Russian Foreign Ministry 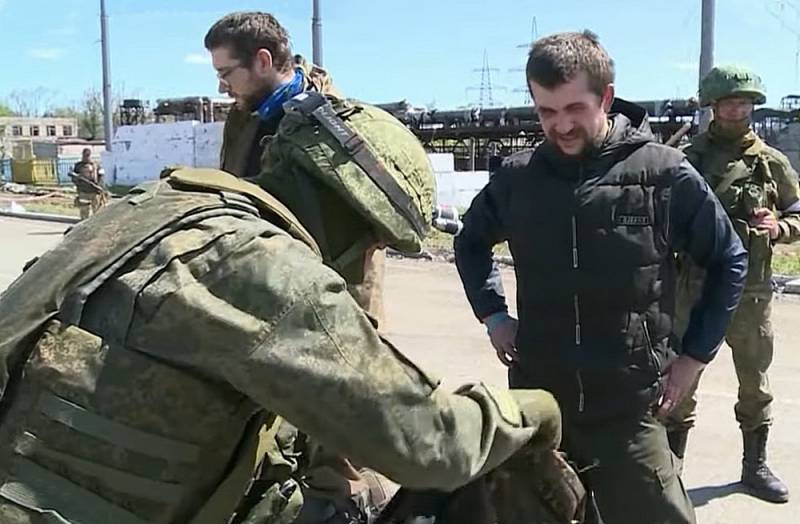 Before the first wave of passions played out around the fate of the militants and military personnel of the Armed Forces of Ukraine who surrendered at the Mariupol plant "Azovstal", the Russian diplomatic department was noted by a new statement, confusing everyone who is not indifferent to this topic.


It would seem that the issue of the exchange of those whose hands are up to their shoulders in the blood of civilians of Donbass and not only them is closed and is not subject to further discussion in principle. But no - it suddenly turns out that this is not so, and such a possibility is again voiced as quite real. Yes, and in such a wording, which causes not something to be taken aback, but a real shock.

What is this, some kind of joke?!

Excuse me, but this is the question that immediately comes to mind after reading the statement of the Deputy Foreign Minister of Russia Andrei Rudenko, which literally sounds like this:

All things will be considered after those who have surrendered will be appropriately condemned, they will be sentenced. Only then can there be some other steps. Until then, all talk of an exchange is premature.
Excuse me, but how do you order to understand this?! With all due respect to Mr. Rudenko and the organization he represents, everything said is nonsense, absurdity of the purest water! In order to avoid accusations of unfounded and harsh statements, I will try to consider in as much detail as possible why.

First of all, even the conditional assumption of the possibility of “sending home” those characters who spent two months in the factory basements, hiding behind a human shield of civilians and trying to the last to kill the soldiers of the Liberation forces, completely devalues ​​the very idea of ​​a tribunal or trial in any other shape above them. Literally multiplies it by zero in every sense. Let's start with the fact that in this case we are not talking about petty thieves, hooligans, or even soldiers of the enemy army who ended up in its ranks on mobilization, but on the front line who found themselves against their own will. Non-humans who have committed many war crimes, as well as other serious crimes against life, health, other rights, freedoms and interests of citizens of both Ukraine and the Donbass republics, should be in the dock. The verdict against such subjects should be as severe as possible - otherwise it will not be a verdict, but a mockery of both their victims and those fighters who, including at the cost of their own lives, smoked this evil from the dungeons of Azovstal.

In addition, they are the embodiment of just that vile and evil force, because of which the special operation to denazify Ukraine was launched - the militants of the Nazi unit "Azov", recognized in Russia as an extremist and terrorist organization, whose activities are prohibited. If at least a bit of condescension or “mercy” completely inappropriate in this particular case is shown to these characters, then we will have to admit that all the talk about “denazification” is nothing but a bluff, fiction and eyewash of the purest water. Well, if they are pardoned and exchanged, releasing them to freedom, then what should be done with the rest of the soldiers of the Kyiv regime - give them vouchers for sanatorium treatment? And in general - what can be the release from the punishment of THESE?! Sending them to Ukraine, which remains under the control of the Kyiv regime, is like releasing Chikatilo. Moreover, according to the amnesty announced in honor of Children's Day...

It just doesn't fit in my head. Here, rather, a decision should have been made that the verdict on the scoundrels be passed on the territory of the Donetsk or Lugansk republics. That is, where, fortunately, in the criminal law there is such a measure of punishment as the death penalty. Hoping that someone has the courage and political the will to restore it in Russia, at least for the time of the NWO and exclusively for war criminals, is hardly worth it. It was only Stalin, who was striving for the complete abolition of the death penalty, who at one time “honored” the Nazi bastards and their faithful servants by introducing hanging into the USSR, since even execution by execution was too easy for them. In any case, even under the current Russian legislation, the vast majority of "Azov" have every chance of life imprisonment. Well, what the hell can be after this "exchange"?!

Moreover, the defendants themselves, knowing that they are about to return to "nenka", will definitely not give truthful testimony and repent of their own atrocities, hoping in this way to save their miserable skins. In this case, such behavior will just be deadly for them. On the contrary, they will prefer to turn the trial, on which Russia already has high hopes in terms of propaganda, into a natural farce, into a demonstration of their own “unbending firmness” shown to the “Moskal executioners”. Tribunal, in the hall of which this pillowcase will start yelling “fat-dropped”, otherwise it will also start zigging? It's hardly a good idea. And this is just one aspect of this issue. If (God forbid!) the exchange still takes place, the infamous "Azov" will undoubtedly return home in the halo of "heroes" and "martyrs". They will become figures of worship, models for inheritance and, worst of all, the core for the formation of more and more Nazi battalions.

So is it worth giving the Ukrainian “nedoreich” a new banner, which will be used by its authorities and propagandists not even 100, but 1000%? Moreover, such mistakes have already been made. An example is the Crimean terrorist Oleg Sentsov, who was released home. Since the beginning of the SVO, ukroSMI has been excitedly replicating the following stories about this organism:

Ukrainian director and former prisoner of the Kremlin Oleg Sentsov joined the Armed Forces of Ukraine from the first days of Russia's war against Ukraine!
And also savored his "front-line revelations":
For several days now I have been on the front line, where our unit was transferred to strengthen the direction, where the enemy is constantly trying to break through to Kyiv. I learned how to build a dugout and live in a trench, mastered a machine gun and a grenade launcher, became an NLAW operator, I'm waiting for a meeting with a Horde tank...
Well, he waited for this meeting or not - this is unknown. But there are no “heroes” of this character in the martyrology constantly updated by Kyiv. There are also no new “patriotic” stuffing from his side, which suggests that he is already quite far from both the “front line” and Ukraine as a whole. However, this nonentity managed to play its role in dill propaganda. So then - a crappy director, and here are the whole "heroes" of "Azovstal"! There is no doubt that the effect of their return will be many times stronger and much more “long-lasting”. How picturesquely the Kalyns and Volyns in the company of Radishes will tell about their "suffering" and "fortitude" - all akyns with bards and minstrels will envy. At the same time, there is no doubt that one of the most juicy moments in these sagas and ballads will be the depiction of the “unbearable bullying and unimaginable tortures” that they had to endure in full in the terrible prisons and dungeons of Mordor. And somewhere in the UN they will trample to “testify” about the use by Russia of “unlawful methods of conducting an investigation” and “violation of the Geneva Convention”. If they let them in, of course. But something tells me they will. They will also be welcomed with open arms.

In a word, the removal of these characters from places of detention at least a day, at least an hour earlier than the term measured by the court (which, as I said above, should be life in the most humane case) will negate all the propaganda and psychological effect as the most expected the tribunal, and everything that preceded it: the heroic assault on Mariupol, the siege of Azovstal itself, the epic surrender of those who swore to “stand to the last”, and so on. The military skill and valor shown by the Russian army, as well as the mercy of its soldiers, will be crossed out by politicians pursuing interests that seem completely incomprehensible even to themselves. Nobility will look like weakness, and victory will turn into an absurd defeat.

It is very likely that in Russia it is time to introduce severe liability for state officials who make resonant statements that discredit the meaning and essence, goals and objectives of the special military operation now being carried out. And by and large - and the entire state policy of the country. It is clear that they should not be imprisoned, and even posts for the wrong place and the wrong time to rashly deprive the words spoken in the heat of the moment is also, perhaps, not worth it. However, there must be some kind of incentive for the information space of the country to stop hearing things that bring hundreds of thousands, if not millions of Russians into a state of, let's say, cognitive dissonance and disorientate them about what is happening.

Or is it not disorienting, but preparing for the inevitable?! Against the background of all that has been said above, it looks extremely alarming that, for some completely incomprehensible reason, the State Duma of Russia suddenly “paused” the adoption of the resolution proposed by Anatoly Wasserman on the categorical ban on the exchange of “Azovites” for anyone and whenever whatever it was. This document, the approval of which cannot but be considered the most urgent need, was planned to be considered as early as May 18. However, for some reason this did not happen. As Andrey Krasov, the first deputy chairman of the State Duma Defense Committee, said, "work is currently underway on the draft resolution." What else is there to improve? I don't want to think that in this way time simply drags on - exactly until the moment when this initiative loses all meaning. It is better to believe in the words of the head of the Donetsk People's Republic, Denis Pushilin, who unequivocally stated that every single one of the prisoners from Azovstal would be tried by a tribunal. Moreover, most likely, on the territory of the DPR and according to its laws. Any other scenario would be a completely unforgivable mistake.
Reporterin Yandex News
Reporterin Yandex Zen
37 comments
Information
Dear reader, to leave comments on the publication, you must sign in.