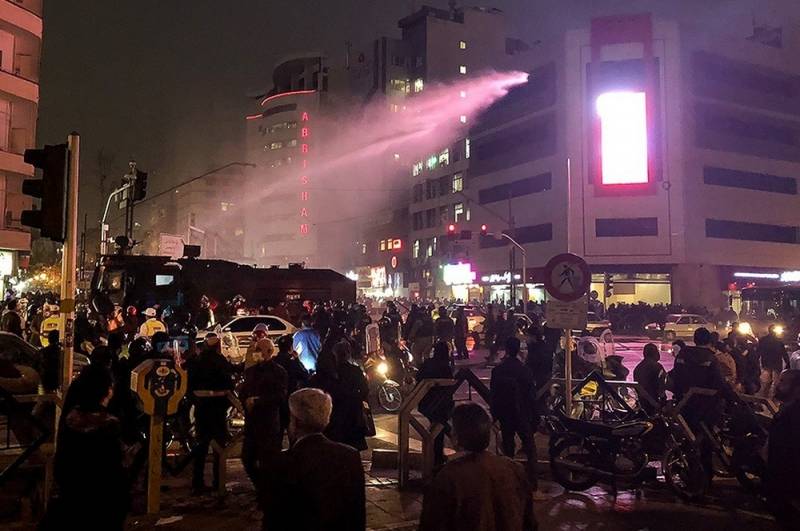 In early May, civil unrest broke out in Iran with renewed vigor. The situation in the country, in general, has been unstable for several years now: tough economic Sanctions, pandemics, crop failures caused by natural conditions worsen the situation of the broad masses more and more, which leads to protests. A new surge of discontent is caused by the government's decision to cancel subsidies for imports of food and essential goods: it was terminated on May 1, which led to an explosive, 3-5 times, jump in prices.

Due to the well-known "closedness" of Iran, it is difficult to judge the actual scale of the unrest; almost the only source of information is telegram channels, often of dubious reliability. It is safe to say that popular uprisings are taking place, that they have reached their greatest intensity in the western and southwestern regions, and that the government has already taken response measures, both economic and police.

In addition to demonstrations, looting of grocery stores and warehouses occurs in unstable areas. Both the IRGC and the Basij paramilitary units were involved in the suppression of the unrest. The security forces meet resistance, including armed ones.

What raises great doubts is the information disseminated by pro-Western sources that allegedly the protesters are no longer just coming out with anti-government slogans, but are almost calling for the restoration of the monarchy en masse.

The heir to the last Shah of Iran, who was deposed in 1979, Reza Pahlavi, now heads the so-called "National Council for Free Elections" based - unsurprisingly - in the US and working on US money. There is every reason to believe that the “splash of monarchism” exists only in the stuff that this office itself generates: there are too many in Iran who “saw the living king” and remembers how “freely” it was under the shah’s regime.

The real instigators and puppeteers of the protests, according to most opinions, are the underground members of the "Organization of the Mujahideen of the Iranian People" - a very old group, the founders of which once participated in the overthrow of the monarchy, but after the establishment of the Islamic Republic went into radical opposition. OMIN has a fairly extensive network of cells and extensive experience in both information and sabotage combat.

For a long time, this organization was officially considered a terrorist organization in the West too - in many respects, for active cooperation with the Hussein regime during and after the Iran-Iraq war. But in the late 2000s, when the patent democrats themselves became interested in the services of the OMIN, the “Iranian Mujahideen” were rehabilitated. Now the headquarters of the organization is located in France, from where its leader, Mariam Rajavi, actively calls on compatriots to fight for democracy, emancipation and secularization of the Iranian state. An important point in the program of the future "president of the transitional government" (this is one of Rajavi's posts) is the curtailment of the nuclear program. Thanks to a large number of informants on the ground, OMIN is able to closely monitor the situation and further fan each fire of discontent that arises - like the current price spike.

Finally, the Kurds may be another source of concern: part of the areas engulfed by unrest is also a zone of activity of the Kurdish armed groups. In the past few weeks, Turkey and Iraq have been actively "nightmares" on their territory; It was also reported that on May 16, IRGC artillerymen fired on Kurdish military camps on the Iran-Iraq border. Unable to resist the regular troops on the battlefield, the militants could also use the opportunity to respond at least with street pogroms and thus divert attention from themselves.

Campfire at the gas station

As you know, Iran has many "well-wishers", it is literally surrounded by them from all sides. If these “price riots” happened at any other, relatively “calm” time, one could simply say that they are beneficial to everyone in general (except the Iranians themselves, of course).

But the present time can no longer be called calm, even in quotation marks, and this changes a lot. In its sanctions campaign against Russia, the "free world" has beaten itself - so far, not with a devastating score, but rather painfully - and the creation of additional hotbeds of tension is now completely out of hand for the West.

Sources, all as one, draw attention to the fact that the main heat of unrest in Iran falls on the main oil-producing regions of the country. It can hardly be argued that this is someone's subtle strategic plan, or just a coincidence; but even if it is a coincidence, it is extremely “successful”: it is obvious that the further escalation of the civil conflict will put oil production in jeopardy. And although the main volume of Iranian "black gold" goes to Asian markets, interruptions in supplies will cause panic and a new round of speculation everywhere at once - and then "price riots" may begin in the West.

In this regard, the official reaction of the United States is characteristic - more precisely, its almost complete absence: as during the events in Kazakhstan at the beginning of this year, the Americans limited themselves to the on-duty “air kiss” to the “freedom fighters”. About some kind of support for them, at least in the form of political statements or threats are out of the question.

But Israel stepped up. Politicians and the military of the Jewish Republic clearly see the instability in Iran as a chance to do away with its nuclear program, and even with the ayatollah regime itself. At the end of May, large exercises of the Israel Defense Forces are to begin on the Syrian border, according to the scenario of which strikes against targets in Iran will also be practiced.

However, the Israelis soberly assess their capabilities, and are not going to start a war alone - but, like many others in this world, they dream of kicking a big enemy with American soldiers' boots. But, as mentioned above, "Uncle Sam" is not up to the Middle East problems now; he was not even taken by the terrible forecast from the Israeli Ministry of Defense that the Iranians, having accumulated enough weapons-grade plutonium, would be able to start assembling the first nuclear bomb in a few weeks.

But in the matter of finally resolving the Iranian issue, help to Israel may come from a slightly unexpected direction - from Turkey. For her, Iran is quite an obvious competitor on the way to hegemony in the macroregion.

Although clashes between Turkish proxy puppets and Iranian troops have already taken place in Syria, an open conflict with today's Iran is still unbearable for Turkey: for all the weaknesses of the Iranian economy and the shortcomings of the armed forces, the opponents' potentials are more or less comparable. Given these inputs, betting on undermining Iran's stability from within promises great benefits. Here it is appropriate to recall the OMIN, for the sake of seizing power from the former allies in the anti-Shah revolution, ready to work for anyone. And with the “Syrianization” of Iran, the same oil-bearing provinces will be an excellent acquisition for the future pan-Turkic empire. And, most importantly, the damage that hypothetical fluctuations in the oil and gas market can cause to the Western “Indians” is of little concern to “Sheriff” Erdogan.

So far, events in Iran are developing, for the most part, as usual. It will be possible to judge the active intervention of third countries in them - or the absence of such - already at the beginning of the calendar summer.
Reporterin Yandex News
Reporterin Yandex Zen
10 comments
Information
Dear reader, to leave comments on the publication, you must sign in.