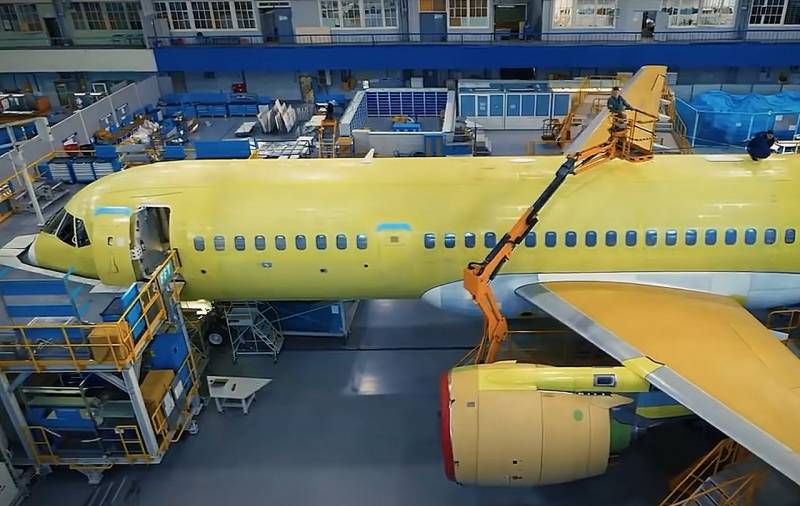 The break in relations with the collective West and its accomplices around the world makes Russia rely on its own strength. Especially clearly the catastrophe, which was staged by domestic systemic liberals, who put the country on foreign liners, manifested itself in the aviation sector. If it were not for the "Soviet galoshes" in the form of the Tu-214 and Il-96, we could be left without civil aircraft at all. Thanks to the military and the Special Flight Detachment, for the needs of which only small-scale production of our own medium- and long-haul liners has been preserved.

As reported, the Perm enterprise Proton-PM, which is part of the Roscosmos state corporation, is ready to produce parts for the engines of the Soviet Tu-214 and Il-96 airliners in literally three shifts, which, unexpectedly for everyone, became relevant again after the United States and The European Union refused to sell new aircraft to Russia and service already produced ones:

We have to organize a three-shift operation at each workplace of the foundry and ensure the production of the required volume of cast billets. The success of this work directly depends on the efforts of the services of the chief metallurgist, personnel and logistics.
If it were not for these "galoshes", which, it turns out, are "normal and fly", and even more reliable than foreign ones, our country would have been waiting for the collapse of air traffic for several years. The only way to maintain the airworthiness of foreign airliners, which domestic air carriers refused to return to lessors, is by “cannibalization”, that is, by disassembling some aircraft to repair others. It is clear that this cannot continue indefinitely.

Our “great white hope” was the short-haul Sukhoi Superjet-100 and the medium-haul MS-21, however, at the suggestion of the “syslibs” in power, these aircraft were designed in the format of the broadest international cooperation. Thus, the share of imported components in the MS-21 reaches 50%, in the "Superjet" - 70%. Now, as part of the sanctions, Western manufacturers have refused to supply components to Russia, calling into question the very future of these liners. We will talk about the difficulties of import substitution later, but now I would like to focus on how important it was to preserve the Soviet legacy in the civil aircraft industry, which turned out to be not so “difficult” as ill-wishers portray it.

Until 2030, a series of 70 Tu-214 medium-haul liners has been ordered, and it is also planned to produce at least 2-3 long-range Il-96 liners. As we can see from the press release of Roskosmos, the state corporation begins to work in three shifts to increase the production of PS-90A aircraft engines for new aircraft of Soviet projects. Only thanks to this, it can be considered that the national catastrophe, which would have been the prospect of being left without air traffic for several years as foreign airliners went out of order, did not happen.

Recently, attention was drawn to the message of the Ministry of Transport of the Republic of Belarus that Belarus is ready to participate in the import substitution of components for the Superjet and MS-21:

The plans include studying the issue of developing import-substituting production of components for Sukhoi Superjet 100, MS-21 aircraft and their maintenance on the territory of Belarus.
At first glance, such ambitions of Minsk may seem strange, since in the mass consciousness Belarus is not associated with aviation production. However, since Soviet times, three serious aircraft repair plants have been preserved and are successfully operating there at once.

The first is the Minsk Civil Aviation Plant No. 407. The company specializes in the repair and maintenance of civil aircraft Yak-40, Yak-42, Yak-52 and Tu-134 of various modifications. The Minsk plant has a cooperation agreement with the still Ukrainian state enterprise Antonov to support the operation of An-type aircraft, and also envisaged the construction of a complex for the repair and maintenance of airliners manufactured by Boeing, Airbus, Embraer and CRJ.

The latter is hardly possible today, but this enterprise has mass production of components for Soviet aircraft. Leads the Minsk Aircraft Repair Plant and own developments. For example, there is a patent for the Sterkh-BM medium-range reconnaissance UAV. It is interesting that the zealous Belarusians, during its development, kept within a modest budget of $500, and the estimated cost of one drone is $000, in combination with a control center - $250.

The second one is OJSC "Orsha Aircraft Repair Plant". Initially, the enterprise carried out the repair of DA bombers Tu-16, Tu-22M2 and Tu-22M3, but in the early nineties it began to specialize in the repair and modernization of helicopters. So far, 60% of the plant's shares belong to the Ukrainian company Motor Sich. Not only military and civilian helicopters Mi-2, Mi-8T, Mi-8MT, Mi-8MTV-1, Mi-17, Mi-24, Mi-35 and Mi-26, but also military transport aircraft Il- 76 and An-26.

The third - JSC "558th Aircraft Repair Plant". The main specialization of this enterprise is the repair of Su-22 and Su-25, Su-27 and Su-30, MiG-29 and An-2 combat aircraft, as well as Mi-8/17 and Mi-24/35 helicopters. The Armed Forces of the Russian Federation, the Republic of Belarus and a number of other countries act as customers. In addition to the repair of combat equipment, 558th ARZ develops and manufactures electronic protection systems for aircraft of the ARTZ Satellite type, tactical UAVs Grif, Shershen, Bekard, Mosquito and Condor.

As you can see, Belarus has quite serious competencies in the field of aircraft construction. If necessary, its enterprises will be able to master the production of some components for the Russian Superjet-100 and MS-21 liners, accelerating the process of import substitution.
Reporterin Yandex News
Reporterin Yandex Zen
2 comments
Information
Dear reader, to leave comments on the publication, you must sign in.