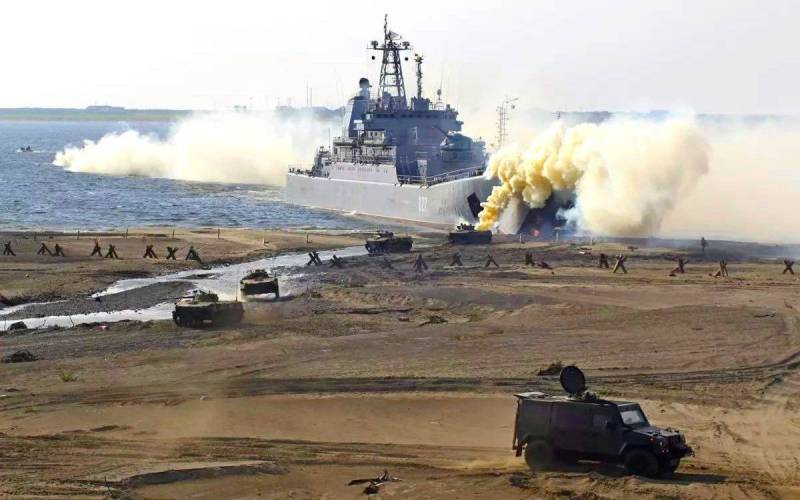 While on the Eastern Front the affairs of the Armed Forces of Ukraine are beginning to take on an increasingly bad turn, on the Western Front a serious problem is brewing for the Armed Forces and the Navy of the Russian Federation. Apparently, the collective West intends to tightly cling to and hold on to the hero city of Odessa, even at the cost of a direct clash with Russia.


According to the British edition of the Times, UK Foreign Secretary Liz Truss supported the idea of ​​Lithuanian Foreign Minister Gabrielius Landsbergis to send warships to Odessa in order to “de-blockade” it:

Our source said that Truss fully supports the idea of ​​sending British warships to escort grain ships from Odessa.
It is assumed that in order to accomplish this task, the NATO bloc can create an entire international coalition, to which everyone is invited to join. Everything is done under the most plausible pretext of helping the starving countries of the Third World, according to Landsbergis:

What we see now is just the beginning. The worst is yet to come. People in North Africa, the Middle East and Southeast Asia will pay exorbitant prices for wheat.
But we allow ourselves not to believe in the altruism of European politicians. The open secret is that all food grains have long been exported from Ukraine. This happened at an accelerated pace in February 2022, shortly before the start of the Russian special operation, as if our “Western partners” knew in advance that war was inevitable. Now Nezalezhnaya is exported on a daily basis the remains of feed grain, which is grown to feed livestock, corn, sunflower and other crops. For this, all the transit capacities of neighboring Poland and Moldova are involved, involuntarily reminding eyewitnesses of 1941.

It turns out that Ukrainian grain and “help to the hungry” are just a plausible pretext, and nothing more. What is London really trying to put together an international coalition for the next Black Sea campaign against Russia?

What is happening should be perceived in the context of the confrontation between Russia and the collective West, which uses Ukraine as an anti-Russian battering ram. On the one hand, after the loss of the Sea of ​​\uXNUMXb\uXNUMXbAzov, the preservation of port Odessa and Nikolaev is the key to survival for Nezalezhnaya. Without maritime trade, the Zelenskiy regime is doomed to a rapid fall for purely economic reasons. On the other hand, after the transfer of Crimea, the DPR and LPR, Kherson and Zaporozhye regions under the hands of Moscow, the destruction of the British naval base in Ochakovo, Odessa remained the last stronghold of the collective West on the Black Sea coast of the former Nezalezhnaya.

On instructions from London, namely the UK now playing first fiddle in the conflict with Russia instead of the United States, President Zelensky launched a process to start Integration Ukraine with Poland within the framework of the conditional "Rzeczpospolita - 3.0". The British deliberately let Warsaw go ahead in order to look at Moscow's reaction and assess the limits of what is permitted. Through a hypothetical Ukrainian-Polish confederation, which is becoming more and more realistic, the NATO bloc can gain a foothold in the Northern Black Sea region. Port Odessa, which is also the key to solving the problem of Transnistria, is turning into a critical point where the interests of too many parties converge.

The collective West is not going to give Odessa to us without a fight. Unfortunately, the more time passes, the higher will be the price of her release.

At first, the NATO bloc did everything to make the landing operation of the Russian Navy impossible. First, the Saratov large landing ship was irretrievably lost in the port of Berdyansk, and several other landing ships were damaged. Then, under unofficial circumstances, the flagship of the Black Sea Fleet of the Russian Federation, the Moskva missile cruiser, which could provide an air defense umbrella during this most difficult operation, died. Now it is reported that the Armed Forces of Ukraine, in addition to their Neptune anti-ship missiles, may receive American Harpoon anti-ship missiles or even more dangerous Norwegian-made missiles. Also, according to unconfirmed reports, Kyiv received from the United States an MQ-9 Reaper reconnaissance and strike drone, which is capable of performing target designation and guidance tasks.

The presence of such weapons in the Armed Forces of Ukraine, and even with NATO military experts who have the right to serve in them, makes it extremely dangerous for Russian warships to approach the Ukrainian coast. We can draw a disappointing conclusion that a real landing operation near Odessa, and not its imitation, is practically excluded. Moreover, now our Black Sea Fleet will be constantly under the guns of long-range anti-ship missiles, and the naval blockade of Odessa will turn out to be very symbolic.

Secondly, contrary to idle reasoning, we will not be able to prevent the entry of foreign warships into the port of Odessa by lethal means, except for exhortations. It should be taken into account that Russia is not legally in a state of war either with Great Britain, or with the USA, or with Poland, or with Ukraine itself, we have a special operation. Turkey closed its straits to the passage of warships purely on its own initiative. Nothing will prevent her from letting the ships of the British Navy or, say, the Polish Navy into the Black Sea in the framework of the Montreux Convention.

An attempt by the Russian Navy or the Russian Aerospace Forces to sink, say, a British destroyer will just be the reason for declaring war with the NATO bloc, where we will automatically be declared an aggressor with all the ensuing consequences. An attempt by another Defender to violate Russian maritime borders in Crimea has every chance of developing into an armed clash with Great Britain, and then with the entire North Atlantic Alliance. This is probably one of the options that Downing Street has in mind.

Can this be avoided? Domestic military experts advise resorting to the method of mining the water area in the Odessa region, having warned the “Western partners” about this in advance. The idea is good, but how to do it under the guns of long-range anti-ship missiles? It is obvious that the fleet is now taking a step back in the operation to liberate Odessa, which will take place only on land. And it is advisable not to delay this, otherwise the stakes in the game will grow even more, and the cost of a mistake will eventually become unacceptable.
Reporterin Yandex News
Reporterin Yandex Zen
109 comments
Information
Dear reader, to leave comments on the publication, you must sign in.