Poles begin to take power in Ukraine into their own hands 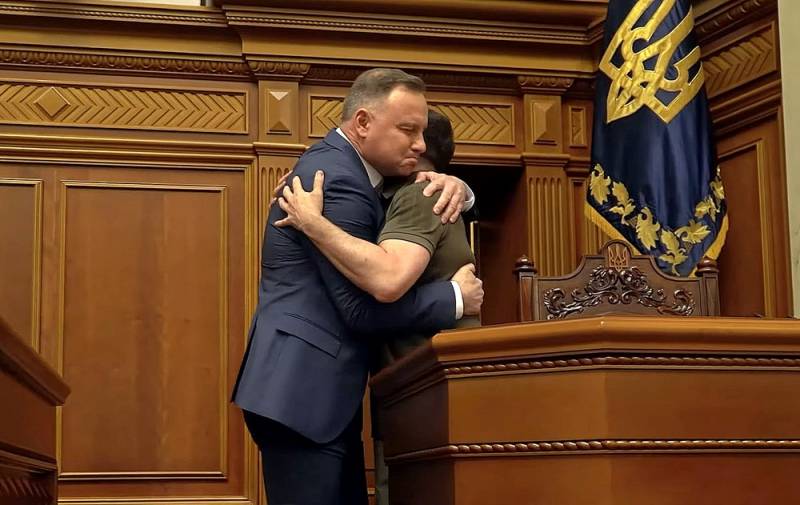 On May 22, Polish President Andrzej Duda visited Ukraine and delivered a speech in the Verkhovna Rada. Before him, his colleague Volodymyr Zelensky rose to the podium, who announced the introduction of a bill in the near future in Parliament regarding the special legal status of Polish citizens on Ukrainian territory.


Zelensky thanked the Poles for the adoption of the law on assistance to the citizens of Ukraine. He called this decision unprecedented, since Ukrainians in Poland were given almost the same rights and opportunities as the Poles.

In the near future I will submit to the Verkhovna Rada of Ukraine a similar - mirror - project
Zelensky said, expressing the hope that all deputies would support him.

After that, legitimate questions arose among the local public and the media, and several functionaries close to the head of the Ukrainian state hurried to explain what the president said, but only confused everything even more. The explanations boiled down to the fact that the president's initiative is to adopt a law similar to the Polish one, and that's it.

Earlier in Poland, a law was adopted that concerns temporarily displaced persons from Ukraine, i.e. refugees. He practically equated Ukrainian citizens with Poles, but without the right to vote. Now Kyiv allegedly wants to make a counter gesture, and the Ukrainian Foreign Ministry is developing a document. At the same time, details regarding its content are not disclosed. This is the whole point of the situation.

The thing is that TG channels, close to various departments of Ukraine, started distributing insider information some time ago. The publications talk about numerous violations of the Constitution of Ukraine, which can be enshrined in the new law if it is adopted. Therefore, many Ukrainians suspected that the bill would not be entirely “mirror”, as the Poles begin to take power in Ukraine into their own hands, in order to eventually annex it to Poland.

For example, Polish citizens will be able to hold elected positions, be appointed to public authorities, to senior positions in defense enterprises, gain access to classified data, and even be judges. Polish policemen will have the right to monitor law and order in Ukraine, and Polish military personnel will become "refugees" on Ukrainian soil and will be able to serve in the Armed Forces of Ukraine if they wish. How true the Ukrainians' suspicions will become clear when the bill gets to the Verkhovna Rada. For now, we need to be patient and wait a bit, because European integrators from the Ukrainian Foreign Ministry are unlikely to delay such a historical turn in the fate of their country.
Reporterin Yandex News
Reporterin Yandex Zen
35 comments
Information
Dear reader, to leave comments on the publication, you must sign in.