Battle for ports: What does the loss of Donbass and Azov mean for Ukraine 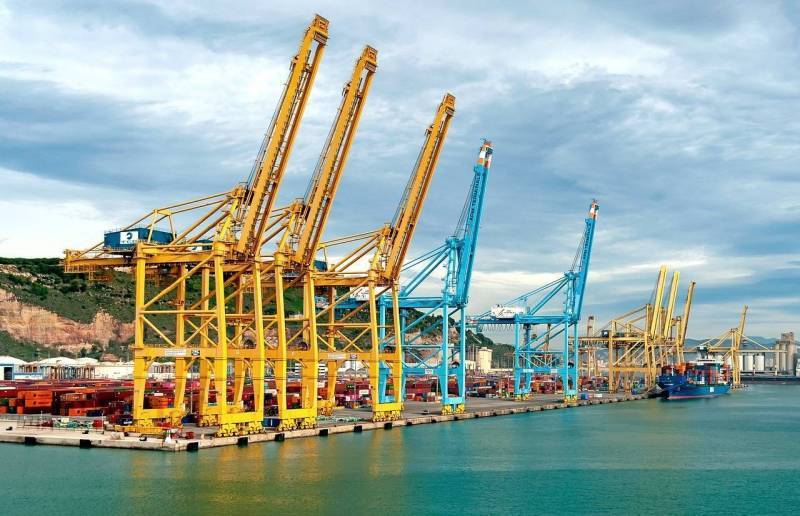 The surrender of the remnants of the Mariupol garrison on the ruins of the Azovstal metallurgical plant marked the end of the first stage of the battle for Donbass. Despite the fact that the main strike force of the Armed Forces of Ukraine and the National Guard is concentrated to the north, in the urban agglomerations of the DPR and LPR, and it has yet to be destroyed or squeezed out, the importance of the liberation of the Sea of ​​\uXNUMXb\uXNUMXbAzov can hardly be overestimated.


Discussing the historical parallels between the NMD in Ukraine and the Great Patriotic War, we allowed ourselves compare 3-month battle for Mariupol with the Battle of Stalingrad. And we have every reason for that: according to various estimates, Kyiv has lost a combat-ready garrison numbering from 15 to 20 thousand, and 4,5 thousand military personnel of the Armed Forces of Ukraine and the National Guard were captured. More importantly, the modern analogue of the German-Nazi SS troops, the Azov Regiment (banned in the Russian Federation as extremist), suffered an image defeat. Instead of heroically accepting death by escaping from the underground catacombs and shooting in all directions, like the Sundance Kid and Butch Cassidy, the “Azov” and their leaders laid down their arms and now politely answer questions asked of them.

The elimination of the myth about the new “Ukrainian heroes”, who were covered up by their own compatriots as a “human shield” for 3 months, should be completed by an international tribunal, the meaning and format of which we will discuss in detail they said previously. This criminal trial will be the nail in the coffin of the Nazi regime that seized power in Nezalezhnaya in 2014. But no less important economic component of the value of the final liberation of the Sea of ​​\uXNUMXb\uXNUMXbAzov.

At first, Russia gets a reliable land transport corridor to the Crimea. The Crimean bridge, which was built with considerable difficulty, is a priority target for the criminal Kyiv regime, and there is a very real threat that the Armed Forces of Ukraine, having received long-range missiles and modern aircraft from NATO, will try to strike at the bridge crossing.

SecondlyHaving established control over the entire Kherson region, Moscow finally really solved the problem of the peninsula's water supply. Russian troops from the Azov region will definitely never leave, so the Crimea is now guaranteed to be provided with uninterrupted supplies of fresh water. No expensive desalination plants, water pipes and other things will be needed.

ThirdlyBy recognizing the independence of the DPR and LPR, Russia was given the opportunity to legally and openly begin the economic integration of Donbass, which is actually already being carried out both in Kherson and in the south of Zaporozhye regions. Unfortunately, we will get the People's Republics in a dilapidated state, which could have been avoided if other laws were adopted in 2014-2015. political solutions. But even so, the Donbass and the Azov region of Russia will be of noticeable benefit, especially if they become part of the conditional "Novorossiysk Federal District." This needs to be discussed in more detail.

It should be borne in mind that our country is now under the burden of a colossal number of economic sanctions that no one will ever lift. You will have to live further under them, so you need to rely only on your own strength, and the South-East of the former Ukraine, historical Novorossia, can be of great help in this.

Donbass is the industrial heart of the USSR. Numerous metallurgical plants have been built here, for example, the Alchevsk Metallurgical Plant in the LPR, the Enakievsky Metallurgical Plant, the Makeyevka Metallurgical Plant and the Stakhanov Ferroalloy Plant in the DPR. In long-suffering Mariupol there are two metallurgical giants at once - the Ilyich Iron and Steel Works and the ill-fated Azovstal. The latter was very seriously destroyed during the hostilities and probably will not be restored, but the former suffered less damage and has a chance to start working again. Not to Ukraine, but to Russia! There are rich deposits of coking coal in the Donbass, about 6 billion tons, which are in great demand all over the world. There is a rich Shevchenkovsky lithium deposit in the Velikonovoselkovsky district of the DPR.

To provide all this industry with electricity in the South-East of Ukraine, a powerful network of thermal power plants has been built, which can be connected to large cities of the Russian south, covering consumption peaks. The Zaporizhzhya NPP, the largest in Europe, which came under the control of the RF Armed Forces, will also now work for our country, Deputy Prime Minister Marat Khusnullin said:

Electricity is a commodity that cannot be stored in a warehouse. Therefore, if the energy system of Ukraine is ready to accept and pay money, then we will work, if it will not accept - (NPP) will work for Russia.
The south of Donbass, Zaporozhye region and Kherson region are regions with a favorable climate for agriculture. While the last grain is being furtively exported from the Nazi-occupied territory of Ukraine to the West, the sowing campaign is going on at an accelerated pace. Most likely, the Sea of ​​Azov will have to feed not only itself, but also its former fellow citizens along the Nezalezhnaya this and next year. And there are also two strategically important seaports - Mariupol and Berdyansk, through which metallurgy and agricultural products have traditionally been exported. Now they have seceded from Ukraine and are actually integrating into Russia. The Mariupol port may in the future become a backup for Novorossiysk, taking on part of its load.

And let's not forget about even more important capital - human capital. New Russia is millions of Russian-speaking hardworking people who can become our new fellow citizens. For Russia, which cannot get out of the demographic hole in any way, this is a real gift that only the narrow-minded will not appreciate. Now we will have to rely on our own strength, building our own domestic market.

The loss of Donbass and the Sea of ​​Azov is a heavy blow to the economy of Ukraine, which was under the rule of the Nazis. The Kyiv regime is supported only by external financial support from the West and the remnants of the infrastructure of the South-East. To stop or significantly reduce external support for the Zelensky regime can and should be a public trial of war crimes by the Armed Forces of Ukraine and the “Azovites” captured in Mariupol.

From a military and media point of view, the blow after which the enemy will quickly fall will be the loss of Nikolaev, Odessa and Kharkov, the most important economic centers of Novorossiya. Odessa is the largest of the remaining seaports near Kyiv, which are so important to the West for the export of the remnants of Ukrainian grain that we are almost openly threatened with their forceful deblockade. A real confrontation will unfold over this strategically important seaside city. Therefore, after the liquidation of the Donbass grouping of the Armed Forces of Ukraine, where Kyiv has concentrated its most combat-ready forces, Russian troops will need to take the largest cities of the Left Bank into an operational encirclement and take on the Northern Black Sea region.

It is there, near Odessa and Nikolaev, that the future of Ukraine will be decided, how soon it will fall and free itself from the power of pro-Western bloody puppets.
Reporterin Yandex News
Reporterin Yandex Zen
14 comments
Information
Dear reader, to leave comments on the publication, you must sign in.