Does the Russian Navy need its own "hidden" aircraft carriers? 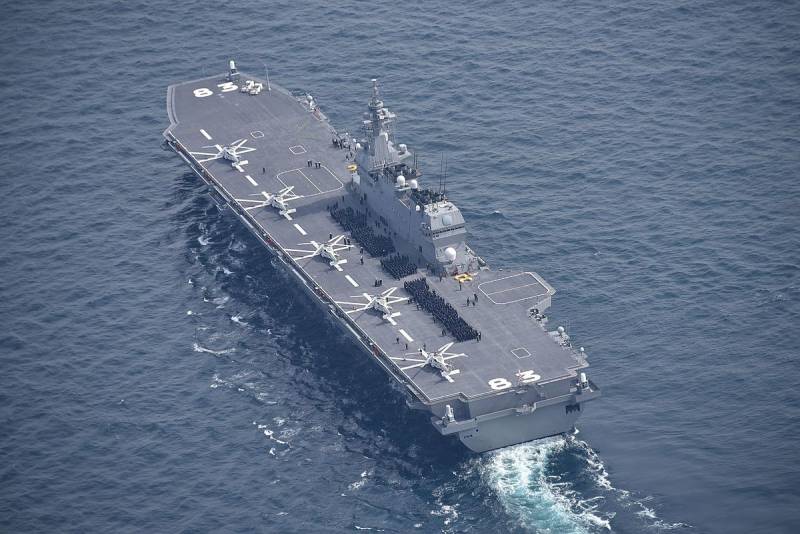 The special military operation to demilitarize and denazify Ukraine clearly demonstrated all the strengths and weaknesses of the Russian navy. It has been successfully confirmed that it is strong in attack, accurately destroying enemy infrastructure with cruise and anti-ship missiles, but weak in defense. The Black Sea Fleet of the Russian Federation irretrievably lost two large ships, including the flagship. This is a great tragedy, but diametrically opposite conclusions are drawn from it.


For many years, experts have pointed out that the critical problem of the Russian Navy is the relatively weak air defense, which makes most of our warships an easy target for enemy aircraft and anti-ship missiles. Alas, it's true. But, perhaps, an even greater problem is the anti-submarine defense of our navy. Fortunately, Ukraine does not have its own submarines, but the countries of the NATO bloc and militaristic Japan have a powerful modern submarine fleet, which poses a significant danger to the Russian Navy. Since about 40% of our "nuclear triad" is tied to the marine component, ensuring reliable ASW is a matter of Russia's national security. There is no time for jokes.

In our country, the theme of the aircraft carrier fleet is a sphere of conflict between opposing concepts and selfish interests, professionalism and aggressive amateurism. It is difficult to find another problem where passions similar in intensity reign. At present, a certain consensus has formed that an aircraft carrier is rubbish, fu, but a helicopter carrier is just what you need. True, here, too, representatives of a certain near-naval party squint suspiciously, they say, what are you up to here: a big ship, a take-off deck, isn’t it a “crypto-aircraft carrier” you are slipping us? Supporters of such views would prefer to build a dozen small missile ships that have almost no air defense and anti-aircraft defense systems, so that one anti-ship missile would be enough for each RTO, with a guarantee.

But, thank Shoigu, some real movement in the right direction has begun. At the Zaliv plant in Kerch, two project 23900 universal landing ships have been laid down, each of which, in addition to 1000 marines and 75 armored vehicles, is capable of carrying up to 16 helicopters of various classes and 4 UAVs. The presence of deck helicopters significantly increases the combat capability of the shipborne strike group (KUG), in which such a UDC is deployed.

At first, the capabilities of anti-submarine defense are increasing by an order of magnitude. Yes, an anti-submarine helicopter can land and take off from a corvette, frigate, BOD or cruiser, patrolling, searching for and destroying enemy submarines. However, ships of this class are not able to provide round-the-clock air watch for hunting for submarines. They simply do not have enough fuel, nor the number of rotorcraft, nor interchangeable crews for this.

In the USSR, a series of project 1123 Condor helicopter carriers was once created, providing for up to 14 helicopters on deck. However, the service showed that this number was not enough, so an upgraded version of 1123.3 was developed with an increased displacement, capable of servicing up to 22 anti-submarine helicopters. Unfortunately, the improved Condor was not built, instead a series of Krechet aircraft-carrying cruisers were laid down, quite rightly believing that aircraft with helicopters on deck are better than just helicopters. We cite these figures in order to understand the scale of the problem that must be solved in the PLO.

Secondly, carrier-based helicopters significantly increase the strike power of the KUG. Rotary-winged vehicles are capable of delivering anti-ship missile strikes against enemy small ships and boats that do not have a modern air defense system. In the confrontation for Serpent Island, attack helicopters could show themselves perfectly, but it is still desirable to deliver them to the scene of action so that they do not burn precious fuel when flying from the Crimea and carry the maximum ammunition. Helicopters are still much inferior to airplanes in this respect. Also, attack helicopters would provide invaluable assistance during the landing operation in the Odessa region. An amphibious assault is an extremely dangerous business, and before it begins, the coast must be completely cleared by fighter-bomber and attack aircraft, and only then will attack helicopters with UDC provide fire support during the landing of the marines, loitering in the air and destroying everything that could survive .

Thirdly, due to the lack of a carrier-based AWACS aircraft as a class in the Russian Navy, it can partly be replaced by the Ka-31 helicopter (Ka-35, which is being developed to replace it). It should be borne in mind that such a helicopter is very much inferior to the AWACS aircraft in terms of combat radius and range of the airborne radar. This is not a competitor to the American "Hockey" in terms of reconnaissance and the issuance of target designation data, but still much better than nothing at all. 3-4 deck Ka-31s on the deck of the UDC or TAVKR, working in shifts, are able to give at least some picture of what is happening around. If the Black Sea Fleet of the Russian Federation had such opportunities today, probably, "Moscow" would be intact. However, this is just a hypothesis.

Taken together, this gives us reason to conclude that the Russian Navy has a number of tasks that are unsolvable without carrier-based aviation. Since full-fledged aircraft carriers carrying both airplanes and helicopters are anathema to us as too big, too expensive, too defenseless and too "useless", let's talk about "permitted" helicopter carriers, which, by the way, are also quite large and expensive, the same “defenseless” and much less functional. Helicopters need to be based on something, right?

As already mentioned, glory to Shoigu, construction of two project 23900 universal landing ships has begun in Russia. Their total displacement reaches 40 tons, and 000 helicopters and 16 UAVs can be accommodated on the deck. It’s quite the dimension of a light aircraft carrier, and if we had short takeoff and vertical landing fighters (SKVVP), they could well be based on the UDC in the American manner.

True, there is an important nuance. Still, an aircraft carrier and UDC are ships of different classes, created for different tasks. If the first is initially a huge floating airfield, sharpened for the maintenance of fighters, attack aircraft and helicopters, then the UDC is structurally designed specifically for transporting a large number of troops and armored vehicles. The air wing on it performs a predominantly auxiliary role, that is, such a ship with a dozen SKVVP on deck will not be able to fully operate in aircraft carrier mode. The maximum is a series of air strikes on the enemy's coastal infrastructure during landing, aerial reconnaissance and cover.

Let's ask ourselves whether a helicopter carrier is possible, which is also an aircraft carrier, "almost" full-fledged?

Yes, an example of such a “crypto-aircraft carrier” can be seen in the Japan Maritime Self-Defense Force. In an effort to get around the imposed bans, Tokyo created a series of two aircraft-carrying ships, which they classified in a rather original way as destroyers-helicopter carriers. These are, of course, Izumo-class escort helicopter carriers. In terms of its performance characteristics, this is a rather curious project. With a total displacement of only 27 tons, the Izumo is 000 meters long, 248 meters wide, and has a draft of 38 meters. Combined gas turbine power plant with a capacity of 7,5 liters. with., providing a speed of up to 112 knots. The ship is not defenseless: its air defense is represented by the ship's RAM anti-aircraft missile system and the 000-mm ZAK Mark 30 Phalanx CIWS.

The most notable is the helicopter carrier wing, which initially consisted of Mitsubishi SH-60K anti-submarine helicopters, licensed Sikorsky SeaHawk SH-60 helicopters and MCH-101 helicopters, which are modifications of the AgustaWestland AW101 helicopter used as minesweeper and transport helicopters, including for search and rescue operations. In addition, the Izumo and its Kaga sistership are capable of transporting up to 500 marines and up to 50 light armored vehicles if necessary.

A few years ago, it turned out that, when laying down destroyers-helicopter carriers, official Tokyo still had aircraft carriers in mind. It was decided to re-equip them for the operation of the American F-35B SKVVP, for which the deck was covered with a heat-resistant coating, and a take-off springboard was built on the nose. All hangars and elevators, lo and behold, turned out to be structurally suitable not only for helicopters and convertiplanes, but also for carrier-based fighters. According to some reports, the updated Izumo air wing can reach 28 aircraft, including 20 fifth-generation F-35B fighters.

Not bad for a ship of a very modest displacement of only 27 tons with a conventional power plant. For comparison: in the Russian UDC project 000, it reaches 23900 tons, in the TAVKR "Admiral Kuznetsov" - 40, in the American "Nimitz" - a little more than 000 tons, in "Gerald Ford" - more than 59 tons. Yes, in terms of functionality and autonomy, Japanese ships are very much inferior to American "heavyweights". However, Izumo and Kaga, with their carrier-based fighters and helicopters, increase the combat capabilities of the Japan Maritime Self-Defense Force by an order of magnitude.

Why are we all this? In addition, we have before us a real example of how you can build a real multifunctional ship of moderate displacement and adequate cost, without tearing the whole country.

Need a helicopter carrier? Here, please, 27 tons of full displacement, almost three dozen aircraft - helicopters and UAVs. No expensive nuclear reactor complicating the design, it is enough to assemble a power plant from existing gas turbines according to the COGAG scheme. There is no need to swell a trillion or half a trillion rubles into construction, which will stretch for 000 years, like a heavy attack aircraft carrier of the Ulyanovsk type. For the price of such a ship, perhaps, it will come out cheaper than the 15 project, and it will be able to immediately bring benefits, performing combat missions as a helicopter carrier.

Need an aircraft carrier? A heavy strike will definitely not work, but the relevant Deputy Prime Minister Yuri Borisov promised something there about resuming the production of Russian vertical takeoff and landing aircraft. Perhaps, in 15-20 years, the domestic industry will still master the domestic SKVVP, and then there will already be carrier ships for them. These are both project 23900 UDCs, and if we in the Russian Ministry of Defense decide to build something like Izumo, these are the “crypto-aircraft carriers”.

Of course, they cannot be compared with the Nimitzes and Fords, but the combat capabilities of the Russian Navy will grow with carrier-based aviation by an order of magnitude. If they don’t overpower their SKVVP with us, then let them serve as helicopter carriers, providing PLO KUG and amphibious assault forces. If you are adequate and moderate in your desires, they can begin to come true.
Reporterin Yandex News
Reporterin Yandex Zen
10 comments
Information
Dear reader, to leave comments on the publication, you must sign in.