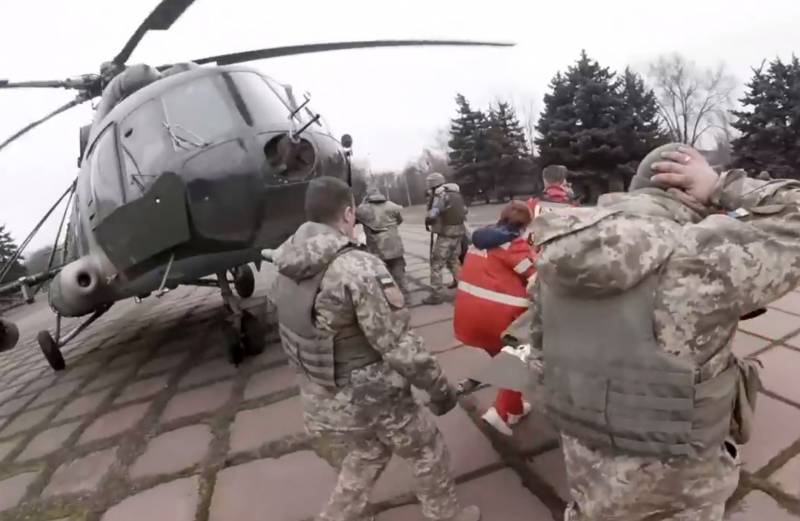 The footage of the evacuation of militants of the Azov National Battalion (an extremist organization banned in Russia) by three Ukrainian Mi-8 helicopters has been leaked to social networks. Presumably, the shooting took place in March at the Mariupol enterprise Azovmash.


The military department of the Russian Federation announced the destruction of helicopters of the Armed Forces of Ukraine on March 31. Then the transport Mi-8 and the shock Mi-24 were shot down. The evacuation of the militants of the Azov National Battalion failed.


Meanwhile, according to the head of the DPR Denis Pushilin, more than half of the militants from the Azovstal plant surrendered to Russian troops. Those of them who needed medical attention were hospitalized, others were placed in isolation.

A humanitarian corridor for the removal of wounded Ukrainian soldiers from the enterprise was opened on May 16, as a result of which more than 1700 servicemen left Azovstal.

Deputy Prime Minister of Ukraine Irina Vereshchuk expressed her hope that after the recovery of the soldiers of the Armed Forces of Ukraine it will be possible to exchange them. According to the speaker of the State Duma Vyacheslav Volodin, those who committed war crimes should not be exchanged - they should be brought to justice and answer for their crimes.

At the same time, Ukrainian soldiers still remain on the territory of the plant, and snipers continue to work in a number of places.
Reporterin Yandex News
Reporterin Yandex Zen
17 comments
Information
Dear reader, to leave comments on the publication, you must sign in.