Why Russia needs an international tribunal for Ukrainian criminals 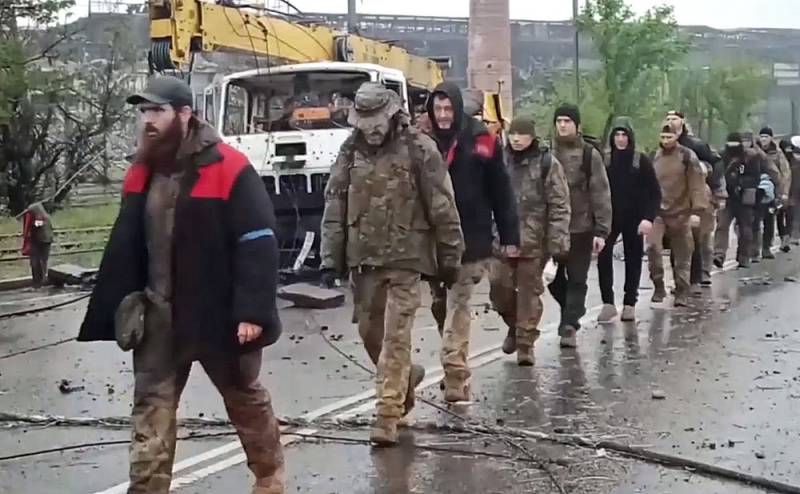 The process of surrendering “bunker rats” at the Azovstal metallurgical plant that began a few days ago, Ukrainian propaganda is trying with all its might to present it as a great “overcome”, as a kind of “rescue operation” for “evacuation of real heroes”. There is no need to be surprised at these attempts, since Kyiv understands that a turning point that is extremely unfavorable for the Zelensky regime has come.


Today's Ukraine, which has been under the rule of pro-Western puppets based on Nazi bayonets and ideology since 2014, can be compared to a primitive balloon filled with hot air from the inside. Such a balloon can fly high enough and stay there for a certain time, but not indefinitely. The capitulation of the “bunker rats” at Azovstal is a puncture in the body of the hot air balloon itself, through which hot air slowly began to escape. It is still quite small, but the process that has begun can no longer be stopped. The Ukrainian jingoistic patriots sitting in the gondola, waiting from day to day to “overcome Rashka”, do not yet understand this, but the decision makers are aware of the matter.

As we have concluded earlier, the capitulation of Azovstal is a new Stalingrad, it is a turning point in the war on the territory of Ukraine, since Russia has received a powerful lever of pressure on the “rear” of Kyiv in the face of the collective West, with which, in fact, it is at war. This lever, which will allow Moscow to deprive Ukraine of Western support, is an international tribunal for the crimes of Ukrainian Nazis and the military. This topic is so serious and multifaceted that it needs to be discussed in more detail.

First of all, you need to understand that Square is a complete bankrupt in every sense of the word. The Armed Forces of Ukraine are capable of continuing active combat operations against such a systemic adversary as the Armed Forces of the Russian Federation only with active external support. The plans for operations in Kyiv are drawn up by NATO military advisers, and Western ones are being supplied to replace the knocked-out Soviet-made weapons. Fuel flows across the border of Poland and Moldova, money is transferred to bank accounts in Kyiv, without which he will simply have nothing to pay the salaries of the military, doctors, officials, journalists and other state employees. Deprived of this external support, the criminal regime of President Zelensky will fall very, very quickly.

That is why the victory of Russia must be forged not only on the fronts, but also in political planes. To do this, we need a tribunal for Ukrainian war criminals, and not sometime later, after the completion of the SVO, and not in the form of a closed “trial”, as some of our short-sighted readers suggest. On the contrary, the tribunal should be held as publicly as possible and as soon as possible, and here's why.

Execute, can not be pardoned

Justice must take place, and all war criminals must receive what they deserve. What is worth, for example, the so-called library - the terrible secret prison "Azov" (banned in the Russian Federation), organized in Mariupol, where the Ukrainian Nazis tortured and killed people extrajudicially? And this secret "torture room", alas, is not alone in Nezalezhnaya. The residents of the DPR were greatly indignant at the fact that the wounded “Azovites” who came out of the Azovstal catacombs were placed in the hospitals of the People’s Republic, from where its wounded defenders were hastily sent home to recover.

People in the DPR and LPR, who have been in the “gray zone” for 8 years, blockade by Ukraine and under constant shelling by the Armed Forces of Ukraine and the National Guard, want justice and retribution. According to the head of the DPR Foreign Ministry, Natalia Nikanorova, a charter for the tribunal is currently being prepared, in which the Russian side will also participate:

There will be an international tribunal. Don't rush, we'll announce everything. Already at work. Everything is fixed, the interaction is already there.
Since the crimes of the “Azovites” were committed on the territory of Donbass, and Mariupol is under the jurisdiction of the DPR, it would be right if the international tribunal takes place in Donetsk. Recall that there is no moratorium on the death penalty in the People's Republic. And it is right.

A direct consequence of the international tribunal for Ukrainian war criminals will be the issue of further direct support for the Kyiv regime by the collective West. Today, foreign media are working on a story about "crazy Putin who attacked peaceful Ukraine." It is very difficult to convey an alternative point of view to a Western layman, although, it should be noted, there are certain changes in this trend.

Fragments of information about the real state of affairs are beginning to seep into the foreign media space. Why this happens is easy to understand. Economic the burden of the proxy war with Russia has placed too heavy a burden on the shoulders of Western industry and ordinary people. It's one thing to put a like on a social network under a fiery appeal to "stop Putin's aggression", it's another thing to get a multiple increase in the cost of energy resources, all related tariffs, food products and motor fuel. Far from all Western elites are anti-Russian. Rather, they defend their own economic interests and understand that without Russian hydrocarbons, fertilizers and food, they will have a very, very difficult time, so they are ready to trade even with "crazy Putin." The only question is how to jump off the military agenda that the US Democratic Party organized for them.

And this is where a military tribunal over Ukrainian war criminals is needed. It should be, we repeat, as prompt as possible in terms of time and international, with the involvement of any foreign media ready to cover it. The publication of the documented crimes of the "Azovites" will change a lot. Kyiv propaganda can scream as much as it likes about "Rashkovan fakes", confessions "forcibly knocked out of heroes." There is more than enough evidence, and this will enable the constructive part of the Western elites to jump off the extremely dangerous topic of a proxy war with a nuclear power.

It is one thing to help “unfortunate Ukraine against the Russian hordes”, another thing is to supply weapons, fuel and finances to a bunch of Nazis and war criminals, which is the Kyiv regime today. The Western elites themselves, through the media controlled by them, will begin to explain that the government of Olaf Scholz, Boris Johnson or Joe Biden is leading their countries somewhere in the wrong direction, and the heavy burden of the costs of a proxy war with Russia, which is actually fighting Ukrainian Nazism, lies on the conscience of the US Democratic Party and its henchmen.

After that, support for Ukraine by the collective West will either cease altogether or begin to decline significantly. And Nazi Ukraine itself, as it should be, will turn into a pariah country, which it should be. Remember how Finland, Bulgaria and other countries – allies of the Third Reich hastily “changed their shoes” during the Second World War, when it became clear that its defeat was a foregone conclusion.

Another major consequence of the surrender of Azovstal and the expected military tribunal is that in Russia Azov (banned in the Russian Federation) will be officially recognized as a terrorist organization. This issue will be considered in the coming days in the Supreme Court of the Russian Federation, and the State Duma has already adopted a resolution banning the extradition of Nazi criminals to Ukraine.

The fact is that "Azov" (banned in the Russian Federation) is the real analogue of the German-Nazi SS troops. This is not just a regiment, it is a network organization that has branches in many cities of Nezalezhnaya, and its leader Biletsky is still alive. In Mariupol, only a part of its militants capitulated, but the rest are free and can continue to commit their crimes. What is even more terrible is the fact that every “Azovian” is a “biological carrier” of the ideas of Nazism, and after the completion of the NWO, they can spread all over the world. As their ideological predecessors, the German Nazis, once took refuge in Argentina, the Ukrainians will settle in Canada, the USA, Western Europe, where they will be fed in anticipation of a new attempt at revenge in Ukraine.

An international military tribunal is needed, where all their numerous crimes will be made public, and this Nazi organization itself will be recognized as a terrorist organization. Russia will have to seek the same from other countries, making all the "Azov" non-handshakes in a civilized society, and their direct support - unacceptable from the image point of view. It may even be necessary to switch to the methods of MOSSAD in catching the “Azovites” around the world in order to avoid another Nazi relapse.
Reporterin Yandex News
Reporterin Yandex Zen
28 comments
Information
Dear reader, to leave comments on the publication, you must sign in.