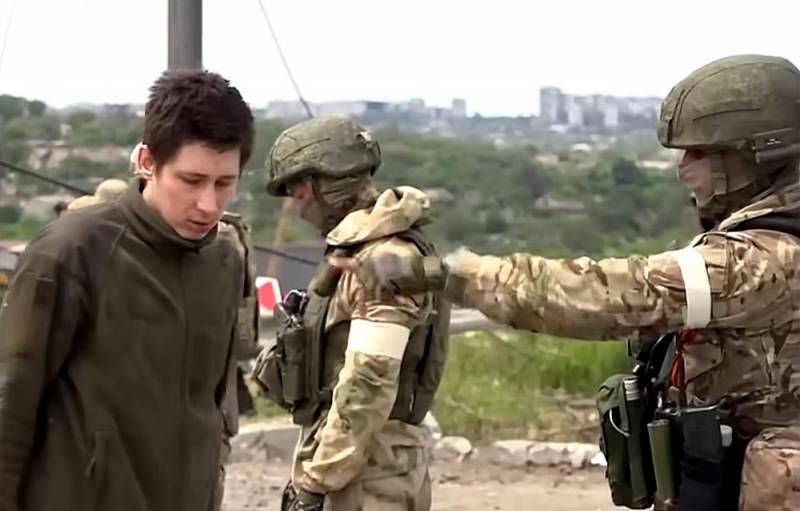 The beginning of the process of organized capitulation of the remnants of its motley "garrison" that settled in the dungeons of the Mariupol plant "Azovstal", which consisted of military personnel of the Armed Forces of Ukraine, the National Guard, policemen, and, first of all, militants of the Azov National Battalion (recognized as an extremist organization in Russia and banned), predictably became the main media event of recent days. The general interest in what is happening is also fueled by the fact that from each of the parties, both Russian and Ukrainian, there are completely different assessments and formulations regarding this event. Forecasts about the future fate of his "main characters" are completely diametrically opposed.


Perhaps, it would not be worthwhile to overshadow such a long-awaited and joyful moment for all the Forces of Liberation with negativity, however, hushing up some moments that stand out from the overall victorious picture will clearly not benefit the cause. Unfortunately, we have to admit that in this case, some commentators' emotions take precedence over their usual inclination to a realistic assessment of the situation. As a result, forecasts are born, which, unfortunately, are unlikely to come true. I'll try to explain why.

Ukrainian formula: "a good hero is a dead hero"

In order to understand why the surrender of the “Azovites” will not in the least prevent official Kyiv from continuing the insane process of their glorification and will not become a “moral blow” for all other Ukronazis and “warriors” of the Armed Forces of Ukraine, one should understand exactly how these individuals interpret the very concept of heroism and its manifestations. Believe me, everything here is more than peculiar. For a better perception of the essence, I can recommend people with a strong psyche to listen to a couple of Ukrainian "patriotic" songs - both from the old, Bandera repertoire, and something from the new one, born "on the topic of the day." The latter are especially nauseating, but what can you do. If you are in regime-controlled territory, they will torture your hearing wherever you are - from a bakery to public transport ...

So, the “heroes” of all works of this kind are, as a rule, “biytsy” with torn off arms and legs, who by no means valiantly bend over the “nenka” and, being at their last gasp, calling on everyone else to do the same. In the understanding of “Ukrainian patriots”, the hero is not at all a valiant winner (because there are simply no such victors in their history), but, pardon the rudeness, he “endured”. “Rolled”, “rotten”, “muzzled”, oppressed, crushed, trampled, but “unconquered”. Somewhere inside - very, very deep. At the same time, it’s not even shameful to whine, whine and complain to such a “hero” - on the contrary, it’s even supposed to. So, in the eyes of their compatriots nailed down by propaganda, the tearful pleas for salvation, with which the “Azovites” addressed everyone and everyone – from the Pope of Rome to Chairman Xi, do not devalue them at all. Take a look at the characters touring Europe in "bloody" underwear, and make sure that for such an audience, the roles of victim and hero are absolutely identical.

In addition, in everything that happens there is another, very nasty nuance. According to Kyiv, the prisoners of the Azovstal dungeons surrendered, as they were promised an indispensable “exchange”. This is exactly what Zelensky, the Deputy Minister of Defense Anna Malyar, who is “incompetent”, and especially the insane Deputy Prime Minister of Ukraine Irina Vereshchuk, who continues to repeat that Azovstal is not capitulating, but a “humanitarian operation” are stubbornly saying. Was there anything like that? Nobody agreed on anything? “And here is your lie!” – official Kyiv will yell, tearing off its throat and dropping abundant foam from its mouth, accusing Russia of “treachery”, “rejection of previously reached agreements”, “atrocity” and everything else. It has been like this a hundred times since the beginning of the NWO, and it will be like that a thousand more times - exactly until it ends. The fact that one of the “Azovites” will actually be exchanged for one of the Russian prisoners of war does not even want to be assumed. Such a turn will simply negate the entire victory over them as such.

I would like to believe that the proposal of the clever Wasserman and the State Duma will indeed be accepted and make such a possibility unrealistic in principle. However, one should not deceive oneself here either - in Ukraine, “heroes” from the imprisoned “Azov” will be sculpted with tripled, tenfold force. They simply adore the “prisoners of the Moskal dungeons” there - let's remember the same ones, not by the night, be remembered, Savchenko or Sentsova. Everything will be the same here, only with multiplication by a thousand at least. The Russian side will be accused of "torture and bullying", violating the rules for the treatment of prisoners of war, and many more similar things, along the way, dispersing the flywheel of completely frenzied propaganda. The confusion that Zelensky and his entourage are now experiencing will pass very quickly - and then something will pour out of their oral cavities that even take the saints out. Inside the territories controlled by Kyiv, no “comprehension of what happened” or “sobering up” from the militant Russophobic frenzy will occur - a 100% guarantee.

There is even less reason to expect that the surrender of Azovstal will at least to some extent change the attitude of the “collective West” towards what is happening in Ukraine, its pro-Nazi regime or the public hung with swastikas and other similar paraphernalia (and professing corresponding views) , this mode is protective. Excuse me, but did they not know something about this infamous battalion or regiment before? They knew in the most beautiful way - both in the USA and in Europe. However, even accepting for show some declarations in their own parliaments, they continued to fill it with weapons and equipment, send instructors and their own citizens there as "watchers". What will change now?

Will the captive "Azovites" begin to testify about their own atrocities, war crimes and about the horrific orders that they received from Kyiv and not only? So after all, this is all that the Ukronazis, that their puppeteers and curators will immediately declare fake, Kremlin propaganda, and so on. All testimonies will be called knocked out under torture and threats, confessions - dictated by FSB investigators, and evidence (which, quite possibly, will be found in the same mobile phones of prisoners), of course, fabricated from beginning to end. You can not even doubt that everything will be exactly this way, and not otherwise. And in this situation, it doesn’t matter at all whether the Nazi bastards will be tried by a jury from the DPR and LPR or some kind of “international tribunal”. By the way, it is far from certain that at least one of the representatives of the West will want to participate in its work. And if so, then there he will be declared completely illegitimate, as well as all his decisions and conclusions. “Yes, they are bastards. But these are our scoundrels!” - in the present case, this formula will work, and no other.

To deprive the Kyiv regime of the increasingly active and large-scale support of the West, it is not at all that litigation is needed (albeit with the most sensational and shocking revelations). It will not weaken even if natural devils from the underworld with horns, hooves and everything else openly come out on the side of this very regime. Only the military defeat of the Ukronazi forces will help here, so large-scale and convincing that the West understands that it makes no sense to invest money and resources in this adventure. It won't "beat back"... That is why it would be senseless to hold any trials now and even, possibly, to the detriment of the cause. Organizing investigative actions, collecting evidence base, and such that it would be unrealistic to refute it, is a must. But it would be wiser to judge the scoundrels from the basements of Azovstal (and not only them) after the end of the SVO, drawing a line under it and proving to the world the necessity and validity of everything that happened.

With all this, it should be understood that the activity of “international figures” like Erdogan, Guterres and all others like them, seized with an insatiable itch, will very soon move to the plane of “rescue” from the well-deserved imprisonment of all this scum. Remember, again, the stories of Savchenko and Sentsov, or the same sailors - participants in the Kerch provocation. Russia will have to spend time and energy on repulsing these “attacks” as well. Excuse me, but the fact that Moscow will immediately and unambiguously send everyone who wants to take part in the “rescue of heroes” to the only possible address in this situation is somehow very doubtful. It is quite possible that another "negotiation front" will arise, on which some sort of bargaining will be conducted, which will irritate the Russian society to the utmost and will not at all contribute to strengthening the country's position within the NWO.

Without a doubt, by saving the worthless lives of Nazi fighters and allowing them to capitulate, instead of simply being wiped off the face of the earth with powerful bombings, Russia showed not only mercy, but also military nobility of the highest order. That's just not at all worth counting on the fact that it will be appreciated by at least someone and at least somewhere outside its borders. To our great regret, it is worth admitting frankly: by acting chivalrously with those who did not at all deserve such treatment, the Russian side, in addition, found quite a lot of problems for the very near future. Well, this is what distinguishes those who are conducting a special operation to denazify Ukraine today from those against whom it is being carried out.
Reporterin Yandex News
Reporterin Yandex Zen
35 comments
Information
Dear reader, to leave comments on the publication, you must sign in.