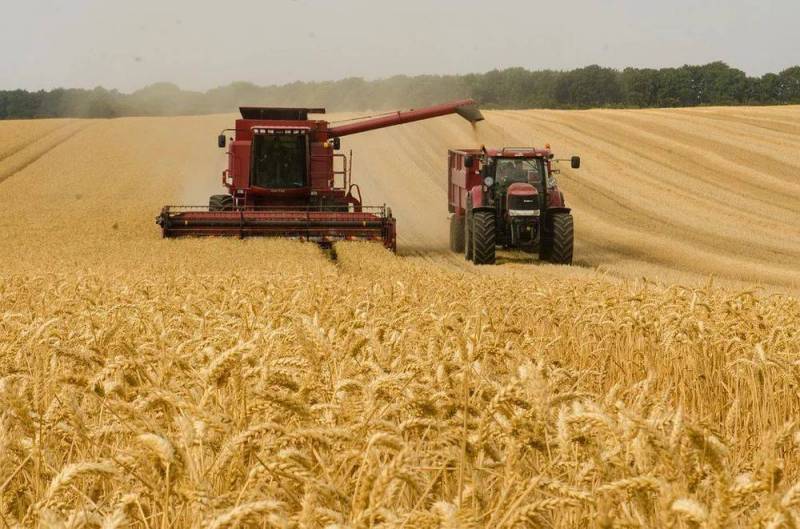 Ukraine is consistently among the seven leading producers and exporters of wheat on the planet. In 2021, a record harvest of grain and leguminous crops was harvested in the country - 73,4 million tons, of which wheat (winter and spring) - 32,8 million, which is more than in the best years under the USSR.


In a year, the population of Ukraine consumes up to 6 million tons of wheat, an emergency reserve in case of cataclysms, as well as a seed fund is still required. As a result, Ukrainians need to keep no more than 8 million tons of wheat, and the rest of the crop should be boldly exported, which is what they are doing. Therefore, there are few special granaries (elevators) in the country where wheat can be stored for decades. Maintaining a certain level of humidity and other parameters costs money, and this does not make any sense when good crops are consistently collected. In this regard, most of the elevators are designed to store wheat for only a few years, and so that the crop does not simply rot, it is exported, receiving solid foreign exchange earnings comparable to income from metallurgy.

After the start of the Russian special operation on Ukrainian territory, Kyiv began to actively carry out a simple barter - wheat supplies go to the West, and weapons, ammunition and ammunition are brought in the opposite direction to confront Moscow. Moreover, the European Union and the United States do not hide the fact that this is a very profitable business for them. They seem to be helping Ukraine, at the same time trying to weaken Russia by prolonging the armed conflict as much as possible, and at the same time they are also resolving issues related to the global food crisis in the world, acting as benefactors.

I wouldn't call it heavy weapons. These are the usual weapons for a war of attrition: artillery and armored vehicles. Common weapon you use in such a war
- Josep Borrell, head of European diplomacy, said without hesitation.

The Americans are also satisfied with the supply of Ukrainian agricultural products, because not only wheat is exported, but also corn, sunflower seeds and other agricultural crops.

Russia blocks the ports of Ukraine, destroys its arable land, warehouses, roads, equipment. This is not only a serious blow to the economy Ukraine, but also aimed at harming the rest of the world in order to weaken the support of the Ukrainian people
- explained the head of the US State Department, Anthony Blinken.

The reality is that the West will continue to supply Ukraine with weapons and receive food in exchange. How much wheat and other agricultural crops will be taken out, and how much will remain, is unknown. Russia is now depriving Ukraine of a major means of paying for Western arms supplies when it takes control of territories in Ukraine's agricultural south, the country's breadbasket. The thing is that wheat does not grow in the forests near Kyiv. The main thing is that the Ukrainians should not later blame the Russians for another famine, when they themselves take the remnants of the harvest to the West.
Reporterin Yandex News
Reporterin Yandex Zen
18 comments
Information
Dear reader, to leave comments on the publication, you must sign in.