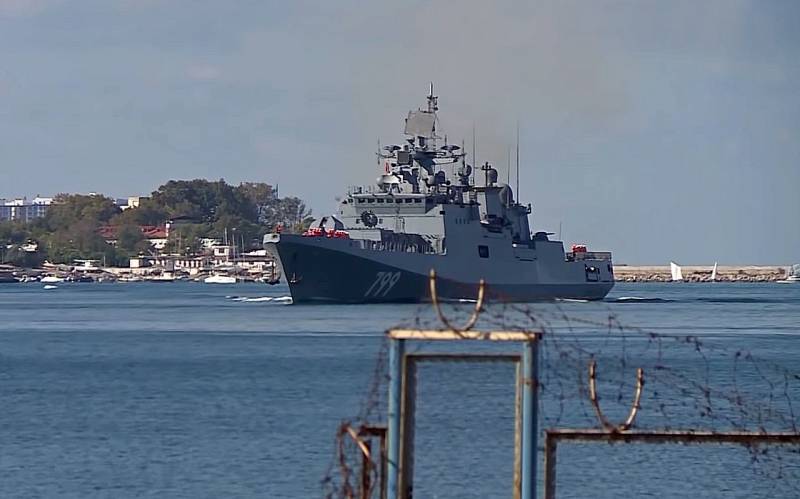 After the tragic death of the Russian cruiser Moskva, for a reason not yet officially established, the Ukrainian media broke loose. Over the past 10 days, they managed to “produce” the frigate “Admiral Makarov” into the new flagships of the Black Sea Fleet of the Russian Federation and safely “drown” it. Luckily, it all happened entirely in their fantasies. But why was this particular ship chosen by Ukrainian propagandists for the role of another "sacred victim"?

As we have detailed told Earlier, the Ministry of Defense of the Russian Federation sees one of the two project 23900 universal landing ships, which are currently being built in Kerch at the Zaliv plant, as the future flagship of the Black Sea Fleet.

The total displacement of the "Russian Mistrals", which are being built to replace the French helicopter carriers, reaches 40 tons. Each Russian UDC will be able to take on board up to 000 marines and up to 1000 armored vehicles. His aviation group, which consists of 75 helicopters and 16 UAVs, turns a huge "barge" into a warship. Depending on the assigned task, the universal landing ship will be able to be equipped with Ka-4K reconnaissance and attack helicopters, Ka-52 transport and combat helicopters, Ka-29 anti-submarine helicopters, as well as Ka-27 AWACS helicopters. UDC deck-based unmanned vehicles can be both reconnaissance and strike.

It was decided that one of the helicopter carriers, Ivan Rogov, would go to the Pacific Fleet to strengthen the KTOF in its confrontation with militaristic Japan. The second, Mitrofan Moskalenko, will become the new flagship of the Black Sea Fleet. In the Sevastopol Bay, work has already begun and is underway to create infrastructure to service such a large ship in terms of displacement.

However, the launch of the future flagship is expected only in 2027, and commissioning even later - in 2029. Until then, as apparently assumed in the Ministry of Defense of the Russian Federation, the Moscow will be able to stretch, which has not really gone through serious modernization. Alas, the old cruiser died, and the place turned out to be vacant ahead of schedule. Then which of the Russian ships can claim to become the flagship of the Black Sea Fleet of the Russian Federation until 2029?

The situation in the Black Sea is currently complicated by the fact that Turkey has closed its straits for the passage of Russian warships. This means that it is not possible to transfer to Sevastopol, for example, the cruiser Marshal Ustinov or the Project 22350 frigate Admiral Kasatonov. Even if it were possible, such a step would weaken the Northern Fleet of the Russian Federation and not only noticeably strengthen the Black Sea Fleet, which is forced to act under the gunpoint of anti-ship missiles in service with the Armed Forces of Ukraine.

In the bottom line, three Project 11356R frigates, Admiral Makarov, Admiral Essen and Admiral Grigorovich, which are part of the Black Sea Fleet, can immediately claim the role of the new flagship. Note that the RF Ministry of Defense was seriously considering replacing the cruiser with a ship of the 2nd rank back in 2014:

In 2015, the flagship of the Black Sea Fleet "Moskva" will go for modernization to the Severodvinsk plant "Zvezdochka", its place will be taken by one of the ships of the first or second rank in the fleet.
This was even before the ugly story with the Mistrals, when the fleet was waiting for the arrival of new frigates of project 11356R:

The main armament of this, in fact, patrol ship is only 8 sea-based Caliber missiles, placed in a 3S14 vertical launcher. She has truncated capabilities and cannot carry, for example, Onyx anti-ship missiles, despite her "universality". The artillery complex consists of a single-gun artillery mount A-190 and a fire control system 5P-10. The gun allows effective firing at a distance of up to 20 kilometers at a speed of 80 rounds per minute.

The defense of the frigate is rather weak. The towed sonar system (GAS) was removed and replaced with an obsolete under-keel GAS with a detection range of 12 kilometers. The RBU-6000 anti-submarine warfare and anti-torpedo defense means (RGB-60, 90R, 90R1) have an excess weight and reduced performance characteristics compared to the more modern Paket-NK complex. A helicopter on the deck of a frigate can accommodate only one, for example, Ka-27PL or Ka-31. The sea-based air defense system of the 11356R project also does not shine with its characteristics. This is a medium-range anti-aircraft missile system 3K90M "Shtil-1", capable of hitting air targets flying at speeds up to 3 km / s at ranges from 2,5 to 70 km and altitudes from 5 m to 35 km, as well as two obsolete anti-aircraft artillery complex AK-630M short range.

In general, the frigates Admiral Essen and Admiral Makarov showed themselves well as "missile gunboats" by striking cruise missiles at targets on the territory of Ukraine, however, against a raid by fighter aircraft or a strike by modern anti-ship missiles, they will resist, to put it mildly, problematic. It is not surprising that the Ukrainian propagandists appointed the Admiral Makarov frigate, which they themselves made into the new flagships, to the role of a new “sacred victim”. Fortunately, this is fake. The ship is safe and sound. But any frigate of project 22350, much more armed and protected, would have been more suitable for the role of the flagship of the Black Sea Fleet before the entry into service of Mitrofan Moskalenko.
Reporterin Yandex News
Reporterin Yandex Zen
49 comments
Information
Dear reader, to leave comments on the publication, you must sign in.