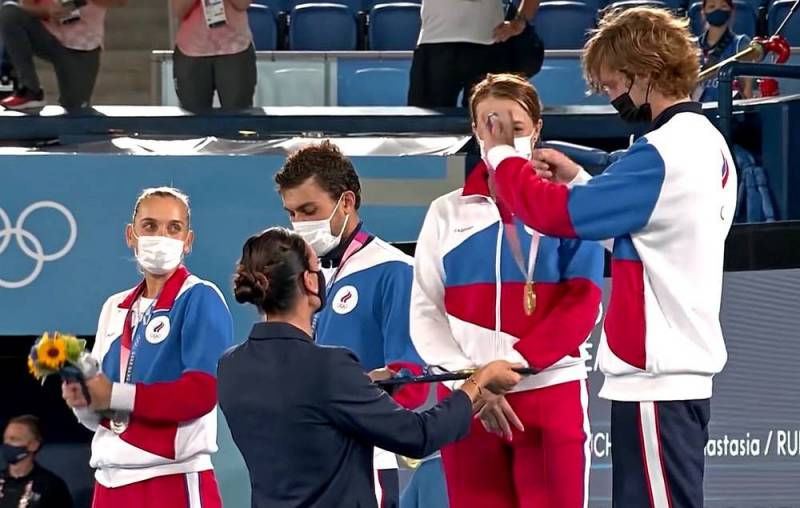 It's no secret that sport and policy, religion, culture and ideology are closely interconnected. The desire to prove the perfection of their own systems, which, among other things, includes the state, the superiority of their pupils, is rooted in the distant past. Long before the spread of the Olympic cult, issues of war and peace were sometimes resolved in this way: among the warring parties, the strongest and most courageous were selected, and they were sent to a mortal battle with an opponent. The losing side retreated.


A little later, states began to create national teams and send them to international competitions. The most famous teams are the Prussian of the times of Frederick the Great, the French of the times of Napoleon and our own, Russian. In our country, as a rule, the goal was to demonstrate the power of the Russian spirit, later, in Soviet times, the perfection of the Soviet system in the development of human physical culture and, more broadly, the “superiority of the socialist system” in general.

Modern post-Soviet sport fundamentally does not have high goals, this is a show, and its goal is the spiritual "feeding of the public." If we talk about the Russian Federation, then sport is needed to demonstrate the prestige of the Russian Federation, but if we are talking about the outskirts of the former Empire, then the essence of the proclaimed essence of "thoughtlessly spending a lot of money" is about the same, but with the proviso of justifying "national independence", i.e. . formation of the pantheon of "national heroes" (skiing - a hero for you, lifting a barbell - an apartment for you, etc.).

Since sport is an imitation of the justification for the need for sovereignty, they are trying to promote it on a par with the army and the economy. State neoplasms disproportionately generously endow athletes with positions, salaries, awards, orders and real estate. Neither soldiers, nor doctors, nor teachers, nor engineers have been awarded this. Not only everyone can teach, heal, draw, but anyone can die. Another thing is a triple sheepskin coat, in order to spin such a thing, you need to be, quote, a “genius”. And three turns of a sheepskin coat is almost like a Tokamak in terms of economic efficiency.

First, the non-traditional (leftist) agenda, which is completely alien to us. Modern sport is like an expensive restaurant - whoever pays orders the music. Most of the world economy is represented by the collective West (the US and its satellites in Europe and Asia).

The modern Western idea is anti-traditional both for the Orthodox world and for the Muslim (and for the Chinese). All over the world, we see huge investments in the promotion of the "collective West" of the left agenda: cinema, clothing, the Internet, education and, of course, sports - everything where there is a massive coverage of the population. Since sports is one of the most sought-after venues, money for corruption goes there as well.

In the Olympic environment, left-wing rules of the game have been created precisely because the traditional world has fewer funds. It is not necessary to help promote the LGBT and BLM agenda with your participation - this goes against our principles.

Secondly, the political background. Almost no Olympics or international competition is complete without doping scandals, which, of course, are based only on political overtones, and the performance of our athletes under the white flag is worthy of neither attention nor respect, because the whole logic of participation in these games, except to draw attention to this event.

Separately, I will allow myself to speak about the work of WADA. It may not be customary to talk about this, but doping is not a magic pill that leads to fantastic results, and does not always lead to those terrible consequences that propaganda posters in sports facilities scream about every athlete from childhood. The fact is that constantly, simultaneously with the development of sports, the boundaries of the limits of the physical capabilities of athletes were shifted. To overcome these boundaries, they had to train more, eat more intensely and sleep more in order to recover, because the progress from training comes during recovery. Gradually, any athlete comes to the conclusion that even with all the will and desire, he will not have enough time of his life to achieve the desired result. The whole main “trick” of doping is that it greatly reduces the recovery process (by 300% or more), respectively, and the result goes up.

In other words, that “terrible and insidious” doping is very often only a medical aid for an athlete if it is used proportionately and under the supervision of a doctor. Therefore, when a sports viewer sees how another world record is being beaten, he needs to keep in mind the fact that many records were broken back in the second half of the XNUMXth century, not without the help of those drugs that were mass-produced by the Soviet Union, the USA, the GDR, Hungary - world leaders in the production of AAS (androgenic-anabolic steroids). In a professional sports environment, it is not customary to ask questions about the use of AAS - the answer is obvious. And this applies to all world sports. But why is only Russia receiving sanctions for this? I think the reason is known...

Based on these two main reasons, I can conclude that playing by someone else's rules, on someone else's field, is a bad prospect for Russian sports. It will not lead to any positive results. You need to go to your own field, with your comrades and play by your own rules. Thus, instead of the Olympic Games, Russia needs to take responsibility for organizing its own Games, where countries that do not want to dance to the Western "left tune" will participate. This is the Islamic world, and the states of Southeast Asia (except Japan and South Korea), Serbia, Hungary, some African countries and some part of historical Russia (for example, Belarus, the republics of the former Ukraine, Georgia, Armenia, etc.), some American states are a kind of "Games of the Invictus".

According to the same principle, it is worth organizing “free world championships”. In other words, it is high time for Russian sports to decide: either Russia is at the feet of the Western world, or Russia is at the head of the free world.
Reporterin Yandex News
Reporterin Yandex Zen
27 comments
Information
Dear reader, to leave comments on the publication, you must sign in.