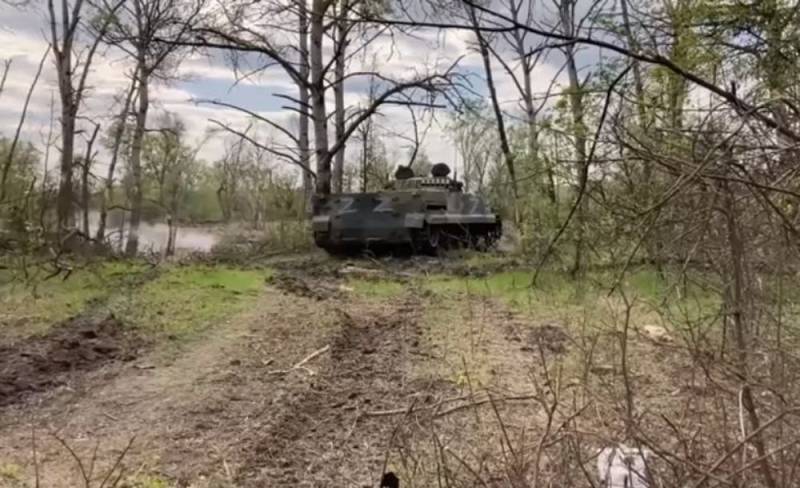 On the evening of May 14, the Russian Defense Ministry released footage of the destruction of a Ukrainian pontoon crossing and a unit of the Armed Forces of Ukraine while trying to cross the Seversky Donets River. At the same time, the exact location and date were not indicated, which is quite understandable, given the ongoing hostilities.


In a communiqué under the video, the Russian military department stated that in the process of reconnaissance and search activities of Russian motorized riflemen, a UAV crew identified armored vehicles of the Armed Forces of Ukraine, which intended to force a water barrier along a pontoon in a wooded area. Ukrainian infantry fighting vehicles made an attempt, but were attacked, their plans were violated, and they could not carry out their plans.

The pontoon crossing was completely destroyed and sank. The enemy armored vehicles with crews that managed to cross the pontoons during the battle were destroyed by fire from Russian artillerymen and BMP crews. Part of the armored vehicles of the Armed Forces of Ukraine was captured by Russian military personnel
- says the official message.


After that, the speaker of the Russian military department, Major General Igor Konashenkov, reported at a briefing on the events of the past day. According to him, during the 80th day of the special operation in Ukraine, strategic aviation aircraft of the Russian Aerospace Forces hit 28 company strongholds of the Armed Forces of Ukraine and 2 enemy ammunition depots near the settlements of Petrovskoe and Zhovtneve with long-range and high-precision air-to-surface missiles.

In turn, the army and operational-tactical aviation of the Russian Aerospace Forces hit 33 places of accumulation of personnel and various equipment APU. As a result, up to 90 military personnel and 18 pieces of enemy equipment were neutralized.

In addition, the artillery and missile forces of the RF Armed Forces hit 6 command posts, 178 places of accumulation of personnel and various equipment of the Armed Forces of Ukraine, 3 fortified bunkers, 28 artillery positions, including 1 launcher of the Smerch 300-mm MLRS near the settlement of Berezovka .

At the same time, Russian air defense systems shot down 6 Ukrainian drones in a day: 5 in the Kharkiv region near the settlements of Russkaya Lozovaya, Pitomnik and Izyum, and 1 over Zmeiny Island. The following were also intercepted: 1 ballistic missile "Tochka-U" of the Armed Forces of Ukraine near the village of Khleborob in the Sumy region and 3 rocket launchers of the MLRS "Smerch" near the village of Kamenka in the Kharkiv region.