"War of attrition": consider options for the parties to the Ukrainian conflict 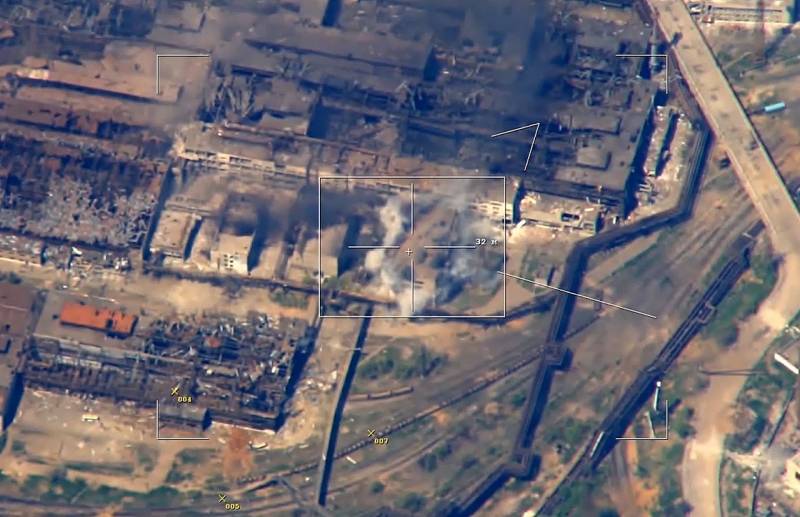 High-ranking representatives of the Kyiv regime continue to unload more and more portions of the most selective "noodles" on the ears of their fellow citizens. In his nightly drug address to the nation, Zelensky the day before stated that "Russia has already lost 200 aircraft and all its prospects as a state." The head of the Main Intelligence Directorate of the “nezalezhnoy” Defense Ministry, Budanov, said that by the end of August, not only “there will be a turning point in the war,” but the Armed Forces of Ukraine “will complete the liberation of Donbass and Crimea.” Budanov's allies from the Ukrainian Ministry of Internal Affairs have somewhat more modest hopes - that "Ukrainian MLRS are about to start shelling Belgorod." This was announced the other day by the adviser to the head of the department, Viktor Andrusiv. It is clear that all this is propaganda, which, moreover, should be taken with a serious adjustment for the mental and drug problems of those who voice it.


In fact, at least somewhat sane experts in the bowels of the most "nezalezhnaya" call "to prepare for a protracted confrontation." Moreover - to the real "war of attrition". Indeed, it makes sense to analyze their calculations and forecasts, if only in order to understand to some extent how exactly Kyiv sees possible options for the further development of the situation, what they expect and what they fear. It is clear that I will accompany these calculations with my own comments on those moments that the Ukrainian media and the expert community prefer to keep quiet about.

Contrary to all forecasts, the announcement of mobilization measures in Russia that was not heard from Vladimir Putin on May 9 was quite reasonably taken in the “non-independence” as proof that Moscow could well do without them. That is, to cope with the task of replenishing the loss of personnel of the military contingent involved in the NMD, which is inevitable during the conduct of hostilities. And even more than that - if necessary, increase it in a certain proportion to intensify offensive operations and / or expand the number of their directions. According to the firm conviction of Ukrainian analysts, this is done through "hidden mobilization", expressed, first of all, in a sharp intensification of the work of the Russian Defense Ministry to attract an additional number of contract soldiers to the army. At the same time, experts of the relevant profile (like Oleg Zhdanov, well-known in Ukraine) come to several “fundamental” conclusions at once.

The first of them is that the Kremlin is determined to continue military operations precisely in the NVO format, and, therefore, is ready to be content with “reaching the administrative borders of Donetsk and Luhansk regions” and, possibly, some kind of “offensive in the South towards Transnistria” in order to consider its main goals and objectives are fulfilled. After that, according to some, the special operation will be curtailed altogether. Those in whom sanity still prevails over optimism are inclined to assume that the very positional and low-flowing “war of attrition” will follow, waging which Russia “will try to impose peace on Kyiv on favorable terms for itself.” That is, in Ukraine they are sure that Russian troops will definitely not storm the same Dnepropetrovsk, and, moreover, Russian troops will not return to the Kyiv, Chernihiv and Sumy regions. And they are unlikely to dare to take Odessa and Nikolaev.

The second conclusion from the same “opera” (somewhat, however, dissonant with the first one) is that in order to conduct full-fledged offensive operations, to increase the current grouping (estimated at 120-150 thousand people) to a strength of 400-500 thousand, Russia will be forced to carry out all that the call for contract soldiers to deal with their armament, equipment, retraining and combat coordination. All this will last quite a long time. Consequently, there is no need to worry about any “breakthroughs” and generally serious actions that carry the real danger of a military defeat to the Kyiv regime, at least until the fall. And even before the beginning of next year. In addition (and this is the third conclusion), the quality of both the personnel of the reinforcements that will arrive at the Ukrainian theater of operations, and their weapons, equipment and equipment, will be significantly inferior to those that the units and subunits involved in the NMD have at the current stage.

"Experts" from the "nezalezhnaya" are firmly convinced that all these replenishment will be supplied exclusively "reactivated" technique and weapons, obsolete and of dubious safety. In the end, almost PPSh and T-34 will go into action. Ukraine, if the situation around it continues to develop in the same vein, with the help of its “allies”, will be able to seize the strategic initiative a hundred times over. Who knows - perhaps even turn the tide of hostilities in the most radical way. In any case, it is precisely this kind of assurances that are heard not only from the participants of the "military-patriotic" television talk shows, but also from high-ranking representatives of the country's leadership and the Armed Forces of Ukraine. Well, already in August Arestovich is eager to “go on the counteroffensive”, but this is Arestovich ... Let's move on to considering the plans of the Ukrainian side, starting from sources, at least somewhat more plausible.

For example, Anna Malyar, Deputy Minister of Defense of the “non-independence” frankly admits that the supply of heavy weapons from NATO countries and, in particular, the training of personnel so that he can be entrusted with those samples that do not belong to the old Soviet-era equipment, can take quite a long time. In any case, not one or two months. This "transitional period", according to her, may be "very difficult" for the Armed Forces of Ukraine. Especially - in the Donbass, where they are now being dealt tangible blows. There are other stumbling blocks as well. The same head of the Ukrainian Foreign Ministry, Dmitry Kuleba, is very concerned that, as he fears, "the last stocks of Soviet weapons in countries that are ready to give them to Kyiv will soon be used up." Well, of course - after all, the arsenals of the Alliance countries that were previously part of the Warsaw Pact are not bottomless!

However, according to British Defense Minister Ben Wallace, his subordinates are now forced to "search for Soviet and Russian-made equipment in order to provide it as assistance to Ukrainians literally all over the world." Here, we note, there are some nuances - not all states that have such weapons will want to give them to the British and Ukrainians, fearing problems with Moscow. And the degree of “weakness” of this very technique in countries where local armed conflicts have been or are still ongoing for many years will be completely different than that of samples that have been on conservation in Poland or the Czech Republic all this time. The West is not in a hurry to transfer the Armed Forces of Ukraine completely to NATO weapons. Expensive, difficult, and generally undesirable. Indeed, in this case, it will be necessary to tear from the heart not decommissioned pieces of iron, but something really worthwhile.

Look, the United States honestly admitted that it would take more than a year to restore stocks of Javelin anti-tank systems transferred to Ukraine - and then at best, if Raytheon gets very tense. As for the Stinger MANPADS, it is generally unrealistic to reproduce them - the Americans no longer have either the appropriate technological lines, or specialists, or ready-made components. So the “attraction of unheard-of arms generosity” from the West for Kyiv may indeed end pretty soon. To this problem is added one more - much more global. Currently in the Donbass (as it was most likely planned) there is a “grinding” of the most trained, fired, combat-ready and motivated units of the Armed Forces of Ukraine and the “national battalions”.

As soon as a significant part of them is not even destroyed, but at least simply reliably “packed” into one or another number of “cauldrons”, the Ukronazi regime will face the question of who, in fact, will fight further - even with Western gifts in hand. The first wave of organisms especially bruised by patriotism and Russophobia has long been in the ranks of the Armed Forces of Ukraine. The formation of the second is greatly hampered by the increasingly large number of data on the killed and captured "nenka zahysnyks". They demotivate quite seriously. Teroborona, on which the Kyiv regime placed great hopes precisely as a huge mobilization reserve, began to desperately resist after the very first attempts to send its detachments to the front line. The soldiers of the TRO who found themselves in the zone of combat operations do not demonstrate not only miracles of military prowess, but also any acceptable level of training.

Further pressure from the authorities on this “Makhnovshchina” generated by it can result in the final transition of the “terodefense” into the regime of bandit formations that no one controls (this process, by the way, is already underway, and in some places very intensively). Then the regular units of the army and the National Guard will have to be diverted from the front, both to fight especially violent gangs and to cover the rear, which the TPO is now, at the very least, coping with. The issue will be especially acute in Western Ukraine, whose “therodefenders”, who today are stockpiling mountains of equipment and weapons, will not go to the South and East under any circumstances by the most brazen and shameless “gutting” of the Western “help” going through them. Kyiv can only count on those potential recruits who foolishly rushed to Galicia to sit out. These will be sent under arms by the locals, and with great pleasure. The rest will have to be tritely caught in cities and villages, forcing them to wear military uniforms literally under pain of death. What kind of army will it be? Well, this, I think, does not need comments.

At the present moment, at least 6 million of its citizens have left the “nezalezhnaya” (according to official UN data). Basically, these are women and children (according to official statistics, again). However, the number of those wishing to be away from the “nenka” is not at all reduced. On the contrary, it is growing, including among persons of military age. However, the Kyiv regime does have quite an effective way to force men to voluntarily go to recruiting stations. Economic The situation in the country is deteriorating rapidly. There is no work in almost all regions, and none. Sooner or later, military service may well become the only alternative to starvation.

In any case, Russia definitely should not give Kyiv those very “months” for rearmament and retraining of the Armed Forces of Ukraine, which Malyar speaks of, to replenish them with some kind of fresh personnel. This will inevitably be followed by yet another attempt at "counteroffensives" and new strikes against both the liberated territories and, possibly, the border regions of Russia. Turning NWO into a bloody and exhausting war of attrition for many years is hardly a good idea.
Reporterin Yandex News
Reporterin Yandex Zen
9 comments
Information
Dear reader, to leave comments on the publication, you must sign in.