Azovstal is a farce claiming to be a global tragedy 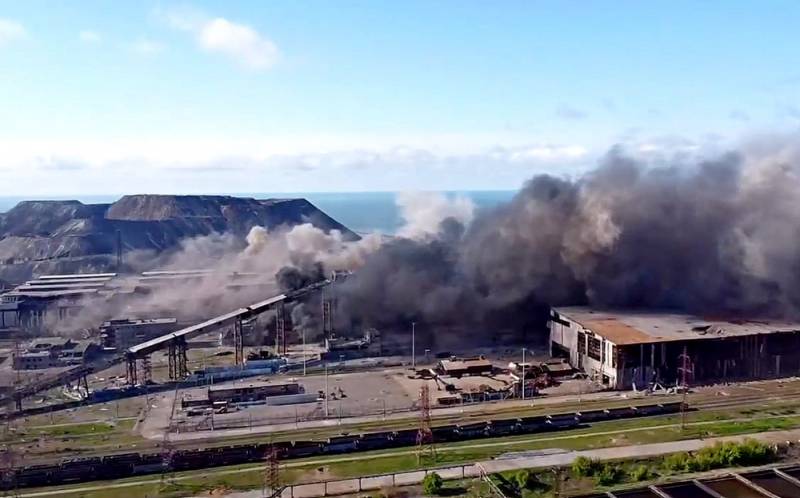 The protracted sitting in the basements of the Mariupol metallurgical plant of the Ukronazi formation "Azov" (an extremist organization banned in Russia) continues to generate more and more waves that disturb the information space. At the same time, the situation, which is positioned by the Kyiv regime as “the greatest tragedy, to which the attention of the whole world is riveted” and, on the other hand, is presented as “the greatest example of the courage of Ukrainian soldiers,” is increasingly beginning to slide into an outright farce and clownery. To a large extent, this is facilitated by intra-Ukrainian squabbles and scandals with mutual reproaches and accusations that regularly flare up on this issue.


The events at Azovstal are more and more reminiscent of some kind of wild theater of the absurd – with the Ukrainian side putting forward ridiculous claims and demands, distributing a priori unrealizable promises and the inmates’ attempts, which have already acquired the most insane forms, to break out of a completely hopeless blockade. Apparently, this action can continue for quite a long time and give those who watch it many new surprises and surprises. In this regard, the question arises: is it worth it to continue? Especially in the same vein as now.

Save us, Elon Musk!

The character of a bad show is given to what is happening, of course, not by the ongoing hostilities at Azovstal, but by the hype raised around them and the periodic “going on the air” of the leaders of the Ukronazis who found themselves in a death trap (by the way, here’s another question - why do they still succeed?!). For example, the day before, the commander of one of the units of the still unfinished 36th Marine Brigade of the Volyn Armed Forces (in the world Sergey Volynsky) did not find anything better than to contact the current owner of this social network, Elon Musk, through a specially created Twitter account (blocked in Russia). with tearful prayer. Naturally - about salvation. His words that the American rogue "came from another planet to teach people to believe in the impossible", and that only he can "give a hint" on how to "leave Azovstal" in the intermediary country, lead to different ideas.

For example, about the fact that from the supplies the inmates left for the most part pills of a very specific property. Well, or about the fact that Volynsky deliberately plays the roly-poly, supporting the “must go show he” format. What was there before that? Pope? UN Secretary General? So why not Elon Musk, he is definitely cooler than them? True, this character will never bet on a deliberately beaten card - he does not like to lose and does not know how, so he is unlikely to condescend to save some kind of Volyn. But Turkish President Recep Tayyip Erdogan is a completely different matter. He shows such fiery and touching concern for the “prisoners” of the Mariupol catacombs, as if not only his fellow citizens, but the second cousins ​​of the “sultan” were stuck there. Mustafa Dzhemilev told about his next attempt to act as their savior - in the flowery style of an oriental fairy tale, where everyone seems to have to be divided by a hundred at least.

If this slippery character is to be believed, negotiations at the highest levels allegedly took place the day before. Their essence was discussed in a personal conversation between the presidents of Turkey and Russia, and the former, of course, acted as the initiator of the "brilliant" plan he proposed to Putin. Further negotiations were conducted at the level of Erdogan's assistant and Sergei Shoigu. The subject of the discussion was as follows: the Turks were ready to send a ship (probably a military one) for the militants who had taken refuge in the catacombs of the plant, which was supposed to moor in Berdyansk. After that, representatives of Ankara were ready to arrive in Mariupol and take out by bus everyone who is on Azovstal. Then place them on your ship, which will depart back to Turkey. The most remarkable thing was that Erdogan at the same time "gave a personal guarantee" that the Nazis extracted from the dungeons "would no longer fight and would stay in Turkey until the end of hostilities."

Alas, both Vladimir Putin and Sergei Shoigu (according to Dzhemilev, and here you can probably trust him) flatly refused such a “tempting” offer. High-ranking representatives of the Russian side once again stated that exit from Azovstal was open only to civilians. The militants are invited to lay down their arms and surrender. Normal handling is guaranteed. On this, another "epoch-making" initiative of Erdogan failed completely. It's hard to say how much truth there is in all this, but it sounds very realistic. Fortunately, Russia's position on Nazi rats burrowing underground has not changed, and so far there is not the slightest reason to assume that it will change.

This very question, concerning the reasons why in Kyiv they demand the release of militants locked up within the defensive position of their own choosing, on whose conscience many deeds that unambiguously belong to the category of war crimes, should be asked to representatives of the Ukronazi regime. And every time they play their “record” about Azovstal. Where has this been seen or heard in world practice?! The combatants locked up in the dungeons are not yet prisoners of war, so that the provisions of the Geneva Convention could be applied to them, and stubbornly do not want to become such, knowing full well that they will face investigation, trial and retribution for everything they have done. This, in particular, was openly stated by the "intelligence department officer" from "Azov" Ilya Samoylenko, who is well aware that this formation in Russia is recognized as terrorist and extremist. At the same time, he, like his colleagues, is trying to rest on the fact that "they did not receive an order from Kyiv to stop resistance and lay down their arms or leave their positions."

This is somehow dissonant with the statements of the same Svyatoslav Palamar, the deputy commander of this gang:

The authorities understood that we could be surrounded, and had to take all the necessary measures to create a logistics corridor for supplies ... We did not have an order to leave, there was only an order and it still is - to continue the defense, and we continue to defend ... This is an extremely difficult and difficult situation.

Complicated? Hard? Give up! Decided to play heroes? Are you more afraid of exposing your own atrocities than you are of being killed by a bullet or a bomb? Then at least don't whine and beg for a "miraculous rescue" of Elon Musk, Superman or Pokemon...

To our great regret, this situation is being used to the full by Kyiv and its owners to further inflate the anti-Russian information campaign, where “forbidden methods” are already being used. Among these, with good reason, is the appeal to Vladimir Putin by the Primate of the Ukrainian Orthodox Church (UOC), Metropolitan Onufry of Kyiv and All Ukraine. The very one in which he “in the name of the Risen Christ” persuaded the Russian president to “give consent to the Extraction procedure for the Ukrainian garrison in Mariupol and its entry into the territory controlled by Ukraine or into the territory of third countries ...” Earlier, the UOC in Onufry's face came up with an even more extravagant proposal - to arrange for Easter ... A religious procession to Azovstal. Naturally, with the subsequent "liberation" of the militants there.

All this really could be perceived as an attempt by the hierarch to fulfill his pastoral duty, but only on one condition - if he made at least one call to the Armed Forces of Ukraine to stop torturing and humiliating Russian prisoners or to remove their weapons and positions from residential areas and do not turn civilians into hostages. There was nothing like it, as far as I know. I'm wrong - correct me. However, the position taken by the UOC, which was considered one of the "strongholds of the Russian world in Ukraine" in the process of the SVO, is a topic for a separate, very difficult and bitter conversation. I cited the example of Onufry solely to show that there is no vileness and cunning that Kyiv would not resort to in order to save those who are hiding today in the darkness of the basements and bunkers of Azovstal.

According to Mikhail Podolyak, adviser to the head of Zelensky’s office, “every conversation between the president and foreign leaders and international organizations begins and ends with the word “Azovstal.” We calculate all possible formulas and formats, and if there are no such formats in the history of international law, we offer new ones ... " more people than Ukraine is trying to save,” however, he also assured that “they are now looking for a political and diplomatic way to solve the situation with the rescue of the military from there.” At the same time, it should be understood that in the perverted understanding of the leaders of the Ukronazi regime, the most reliable of these “ways” may seem to be the capture of a certain number of Russian citizens (and not necessarily the military), who, in the usual manner for this bandit pack, will then be offered to be exchanged for militants. Is it worth provoking war criminals who have completely lost their adequacy to a new atrocity?

There are no more civilians at Azovstal. This is a statement by Vice Prime Minister of Ukraine Irina Vereshchuk. Only combatants remained in the dungeons. Wounded? These are wounded Nazis, and they were offered surrender a hundred times. In light of the current situation, it's time to recall the postulate about what is done with an enemy who does not surrender. And put it into practice, using all the power of fire destruction available to the Russian army. The current criminal Kyiv regime will one way or another declare the Nazi underachievers sitting in rat holes as “heroes” (this is being done right now, every day and many times a day) and will inflate their cult. Kyiv very skillfully and effectively uses the protracted farce for its own benefit. Therefore, Russia should put an end to it. And to do it in such a way that the well-deserved fate of the Nazis from Azovstal turns into a message for all others like them, becomes a warning that there will be no mercy for them and there is no chance to avoid retribution.
Reporterin Yandex News
Reporterin Yandex Zen
11 comments
Information
Dear reader, to leave comments on the publication, you must sign in.