Covid in China: totalitarianism or concern for the people? 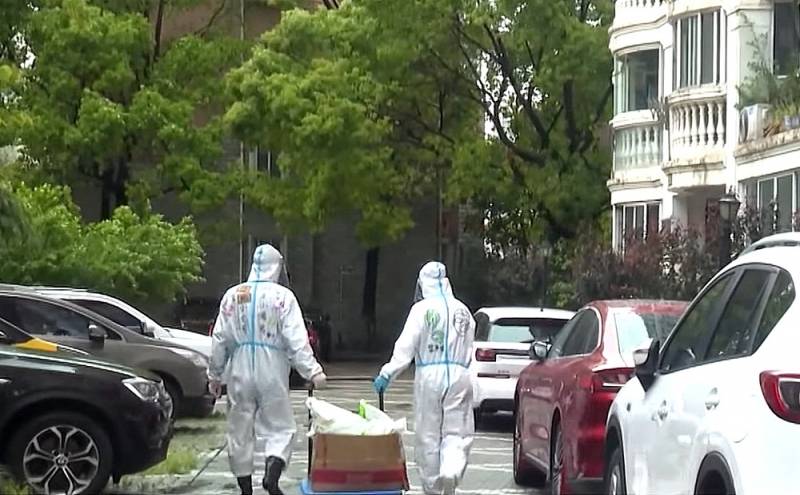 The front pages of the Western media are busy with the conflict in Ukraine, while the second pages paint the horrors of the Shanghai quarantine. Shanghai residents are called blockaders, they talk about how the Chinese authorities staged a famine, exterminate dogs and cats, separate children and parents, launch drones that monitor the streets, and warn from loudspeakers about responsibility for violating covid orders. Social media videos paint an apocalyptic picture of empty streets and Chinese screaming from windows.

All major media burst into articles about monstrous economic consequences of the lockdown of the 25-million metropolis with the largest sea and river port. Critical posts about the inability to order food, about the fatigue of Shanghai residents from restrictive measures, and the like are carefully isolated from Chinese social networks and translated into European languages.

The severity of the quarantine measures of the Chinese authorities contrasts sharply with the "world practice". The vast majority of countries in the world have gotten used to the pandemic, and Western states have lifted most of the restrictions in full force, in some cases, despite the increase in morbidity and mortality. The CCP has declared policies zero tolerance for covid and adheres to it with a firm hand, despite the panicky forecasts of economic consequences.

The outbreak of covid began in Shanghai on February 28, 2022 and was caused by an omicron strain imported from abroad. By the end of March, about 16 thousand diseases were detected, and by April 8 there were already more than 130 thousand of them. Moreover, in 90% of the disease, the disease was asymptomatic. A total of 11 people had died by the end of April, half of whom were over 70 years old.

In any other country, except, perhaps, North Korea, such a per capita incidence would not only not cause any restrictive measures, but would not even be recorded by the health authorities. Moreover, no country in the world would shut down a metropolis like Shanghai as a result of such an outbreak. This gives rise to numerous conspiratorial theories and a fantasy-rich search for Xi Jinping's true motivation. Some say that the cunning Chinese decided to bring down the Western economy by breaking supply chains, others that the insane dictator took 25 million people hostage, and still others believe that the world backstage command and staff exercises are being held on a future thermonuclear war. But the reality, as usual, is much more prosaic.

The Essential Differences of Chinese Power

The Chinese state is fundamentally different from typical Western democracies. In the West, the government positions itself as a system of institutions standing above society, designed to maintain a balance of interests of various strata of society, to prevent open conflicts and confrontations, it is something like an arbiter between various economic and political forces. Hence the ideology of parliamentary democracy, checks and balances, separation of powers. Questions of national importance, by and large, are exhausted by the tasks of defense and the protection of law and order. Education, healthcare, social support of the population, the policy of redistribution of incomes are included in the sphere of state interests insofar as the role of the state is more of a regulatory than a managerial and guiding character.

In China, according to the constitution, the state is not so much the arbiter of society as directly and directly controls its life. The state owns and manages all the land of China, the leading public sector of the economy, including banking, it is charged with increasing labor productivity, enlightening and raising the cultural level of the population, developing science, health care and pharmacology, the media, publishing, literature and art. The state, according to the constitution, even regulates the birth rate. In other words, the state in China formally and legally manages almost all social processes - from the production of goods to the personal life of a Chinese. In practice, it’s even worse: in everything where the hand of a Chinese official can reach, there are rules, instructions, methods, a “general line”.

At the same time, the state is not governed by freely elected people with different views and approaches, but by a relatively unified, disciplined, highly ideological party with a strict vertical structure that cannot be re-elected in the next elections. It is even more difficult to change a party from the inside than to overthrow it, because it has a clear program that each member is obliged to share, and powerful institutions of party control that every year purge tens of thousands of corrupt officials, double-dealers and ideological enemies, that is, people who are only on share its program in words (from 2011 to 2021, almost a million people were purged in the CCP). The party rules the state, and the state controls the entire society - this is the social model of modern China. And the party, in turn, is controlled by two dozen leaders, headed by the chairman.

The Western theory of totalitarianism, which was invented in order to ideologically identify fascist and communist regimes, quite accurately describes the general principles of organizing the society of socialist countries (the total role of the state), but significantly misrepresents the fascist states themselves. Hitler's Germany, Mussolini's Italy, Franco's Spain, Pinochet's Chile, or militaristic Japan, in terms of the role and place of the state in society, are more reminiscent of the modern United States than China or the USSR. The similarity of fascist and communist countries is limited only by the purely external presence of a one-party system and the figure of a leader. Moreover, the meaning and role of the figure of the leader in the first and second cases differ significantly. The same Hitler, as a politician, was rather nominally a leader, he was forced to reckon with the powerful financial clans of Germany, and all his doctrines were cheap propaganda tricks. This is not to mention the fact that many major politicians in purely democratic countries also claimed the role of leaders. With one-party system, the situation is no better, since most of the multi-party systems in Western countries consist of politically homogeneous parties that replace each other from election to election without a radical change in domestic and foreign policy.

From the features of the role and place of the Chinese state in society follows the specifics of its political line. It is entirely determined by the uncompromising decisions of the party leadership. It takes into account only the circumstances, but not the opinion of certain groups of the population and social strata. Such a policy requires great support from the population, or at least its loyalty to the government.

Why and why Shanghai was quarantined

Obviously, the leadership of the CCP views the situation with covid in a completely different way than most governments in the world. If economic interests and social consequences of anti-epidemiological measures are usually put in the first place, comparing them with damage to the health of the population, then the Chinese proceed from a different message. One can, of course, fantasize that this is another “cunning plan”, but most likely, we are talking about a consistent scientific assessment of the consequences of the pandemic, primarily for the health of the people. No one knows what scientific and medical calculations are on Xi Jinping's desk, but in the British journal Nature Medicine, a group of scientists from the United States and China was found who made an educated guess about the motivation of the Chinese authorities. It is possible that this publication was made at the suggestion of the CCP to explain its position to the Western public.

They built a model for the development of the epidemic without taking into account the harsh measures of the Chinese government, and it turned out that in six months the Shanghai outbreak would have swept the entire country and would have given 112 million diseases. Then there would be a relative decline in growth and addiction, as in the West, with a sluggish increase in cases. According to their estimates, the Chinese healthcare system would have coped with such a number of cases, since the bed fund would have been loaded at its peak by 50%. But the Chinese healthcare system would be catastrophically unable to cope with the number of patients who require resuscitation. Now in China there are 64 thousand beds in intensive care units, and at the peak there would be up to a million seriously ill patients. According to scientists, the traditional death rate from SARS in China would increase from 88 thousand people a year to 1,6 million in six months as a result of covid. Thus, the lockdown and quarantine of Shanghai save at least more than 1,5 million lives, primarily of elderly Chinese.

In addition, we must not forget that the pandemic's gravity turns the situation from relatively controllable to uncontrollable, and the communists do not like it more than anything. The government, which in its essence undertook to manage the entire society, will try with all its might to keep all risk factors in line with the predicted development.

Obviously, Western governments are not particularly worried about the death of their old people, because they are not really needed by anyone except their relatives. Waste material, only creating a burden on the budget. The Chinese government seems to take a different approach.

However, the decision to quarantine and lockdown Shanghai is not only a humanitarian motive. This is a great test of the power of the party, a demonstration of the strength and unity of the Chinese people to the whole world, and an opportunity to finally declare that the party and government care about the life of every Chinese. This outweighs the economic damage.
Reporterin Yandex News
Reporterin Yandex Zen
4 comments
Information
Dear reader, to leave comments on the publication, you must sign in.