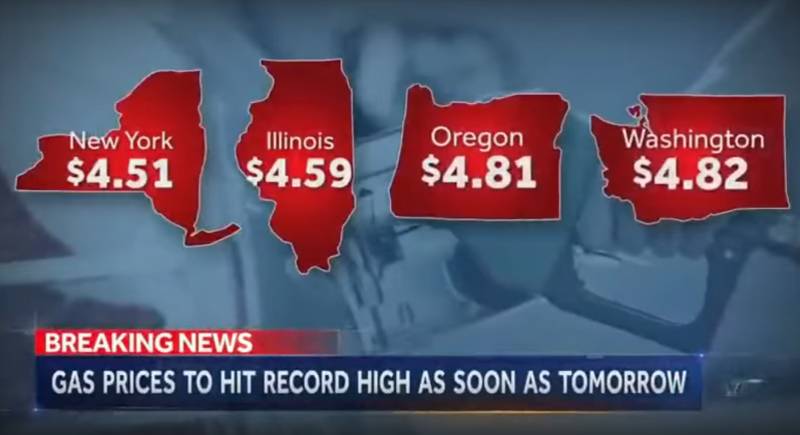 
The record rise in gasoline prices is reported, in particular, by the American Motorists Association, which analyzed more than 60 US gas stations. The most expensive fuel is valued in California - 5,84 dollars per gallon, while a month ago a gallon of gasoline here cost 4,14 dollars.

Last but not least, the increase in the cost of gasoline is associated with an increase in the price of oil. Thus, the price of Brent and WTI rose to $100 per barrel and more. Many Americans who were planning to visit friends and relatives in other cities across the country on Memorial Day (the last Monday in May) will be forced to change their plans.

To keep fuel prices from rising further, Washington decided to release large volumes of oil on the market. So, at the end of April, 2,2 million barrels of oil reserves were printed in the United States, which amounted to 1% of all black gold reserves in the United States. However, these measures are not able to reduce the price of gasoline.


In addition, Joseph Biden asked the citizens of the country to urgently switch to electric vehicles in order to save on the use of gasoline. The authorities even promised tax breaks to those who prefer electric vehicles to gasoline ones. Nevertheless, the market is in anticipation of even greater demand for energy resources in connection with the imminent release of China from quarantine.
Reporterin Yandex News
Reporterin Yandex Zen
2 comments
Information
Dear reader, to leave comments on the publication, you must sign in.