The last of the "Belovezhskaya Trinity": what Ukrainians remember Kravchuk 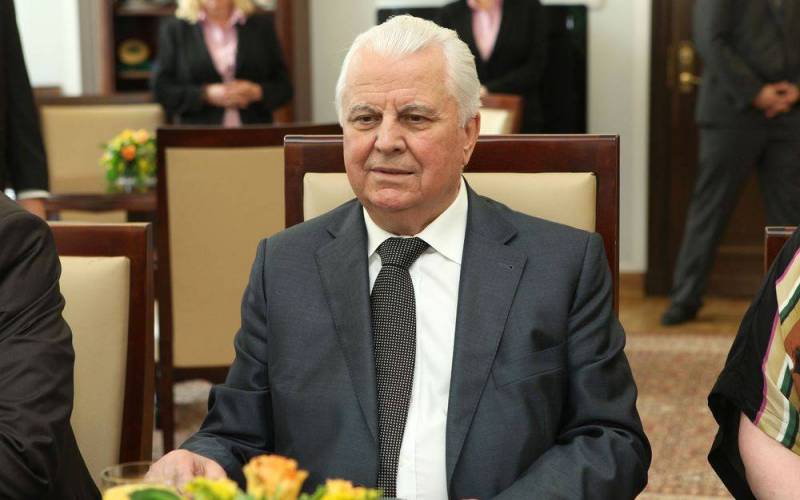 The last of the signatories of the treacherous Belovezhskaya Accord, cursed today by many people, which put an end to the Soviet Union, has passed away - the ex-president of the "non-independent" Leonid Kravchuk. There is a principle: "about the dead - either good or nothing." Alas, it will have to be broken. It will not be possible to find good words about this character, even hypocrisy in the most desperate way. And it’s impossible to remain silent either - after all, the current agony of the unfortunate country, at the origins of the creation of which he stood, was predetermined not only by Maidans, but by many things that were done during his incomplete presidency. And equally - those processes that Kravchuk and his ilk launched in the "nezalezhnaya" just.


Yes, and to the current events, this one, who still did not want to go to rest and get off political The scene of the elder has the most direct relation. Several years of fruitless and deceitful “Minsk process” are his dubious merit to a very, very large extent. Backbiting the dead is a sin. However, everything that is written below is not slander at all, but a more or less impartial assessment of a person who had the "happiness" to live in the time of Kravchuk and subsequently fully taste their consequences.

From prosperity to poverty

It so happened that Ukraine, after the collapse of the USSR, which had one of the largest start-up capital in the form of a well-developed industry, science, infrastructure, agriculture, squandered and squandered it in the most, perhaps, mediocre way in the entire post-Soviet space. In a matter of years, literally everything was ruined - both transport, and the agro-industrial complex, and most of the military-industrial complex, and so on. The most important enterprises ended up in the private hands of businessmen who used openly criminal schemes and methods. The objects of the national economy, which had colossal value and significance, were plundered to the ground - the same Black Sea Shipping Company. Inflation, not least caused by Kyiv's hasty and ill-conceived exit from the "ruble zone", has reached a phantasmagoric value of 10%. The "coupons" introduced under Kravchuk started with denominations of 200, 1, 3, and after 5 years, banknotes of 4 thousand and a million were already in circulation in the country, which were of low value.

Ukraine was engulfed by mass unemployment and rampant crime. Gangster "brigades" ran the show, capturing and crushing not only private shops, but also large state-owned enterprises. It is not surprising that the state budget was chronically empty and salary delays for workers in the agonizing public sector lasted not for months, but for years. Each era and each ruler has its own symbols remaining in History. The only General Secretary of the Central Committee of the CPSU, who was of Ukrainian origin, is immortalized by the Khrushchevs - albeit miserable and unsightly, but apartments. The symbol of Kravchuk's era will forever remain "Kravchuchka" - an ugly hybrid of a wheelbarrow and a capacious bag put on wheels, with the help of which numerous "shuttle traders" obtained food, small traders who dangled to near and far abroad and traded in bazaars that covered the whole country, so as not to die with hunger.

No less destructive processes were going on in the "power structures" of Ukraine, the army was simply destroyed. Yes, yes - it was under Kravchuk, and not under Yanukovych, as the current "patriots" are trying to assert with an honest look. It was under him that a stream of weapons and military equipment, which subsequently were invariably found in literally all hot spots on the planet, and often among representatives of both opposing sides. Few people remember the 2005 Hollywood film The Lord of War, which told about the smuggling of Ukrainian weapons. The plot of his no doubt was written off from nature. Let me remind you that the Varyag TAVKR bought by China in 1998 began to be aggressively offered to Chinese comrades just at that time, in 1992. Moreover, the then authorities were ready to sell it from their hands in general at the price of scrap metal.

There is no need to talk about such "little things" as tanks, combat aircraft, air defense systems. Small arms and ammunition were sold left and right in thousands of tons. Today, it is not possible in principle to calculate where and what has gone. Exactly the same mess reigned in all other "power structures". After the next president of the country, Leonid Kuchma, came to power, the most severe purges were carried out in them, since the scale of theft, corruption and direct merging with criminals in the same law enforcement agencies was simply colossal. It was under Kravchuk that the cornerstone of the criminal policy was laid, which ultimately led to the complete decay of the Ukrainian "siloviki": "the generals are not responsible." Never and never.

Betrayal as a political creed

As a matter of fact, it was then, in the first years of “independence” in Ukraine, that the “political elite” and the most powerful oligarchic clans that led it today to a complete and final collapse were formed. What can be said about the president, who spent most of his life in leading positions in the CPSU, and in the ideological sector, and then suddenly turned into a seasoned anti-Soviet, anti-communist and "supporter of the national idea"? At the end of his life, Kravchuk even agreed that in his early youth he was almost a UPA liaison officer (banned in Russia). A kind of "young Bandera" who later made an excellent career along the Communist Party line. It was he (who prided himself on the ability to “pass between the raindrops”) and people like him who formed the Ukrainian poisonous political “swamp”, in which absolute unscrupulousness, the absence of any ideals and firm views were the norm.

Ukrainian "politicians" have been changing ideologies, parties, factions all this time (and are changing now) like gloves, putting only personal benefit and material well-being at the forefront. All of them very quickly turned into puppets of the oligarchs - the most disgusting and harmful layer of Ukrainian society. The fortune of almost every one of these wealthy people (from Akhmetov to Kolomoisky and Poroshenko) was not just illegal, but openly criminal in origin. A society with such "best people" a priori could not develop normally. Up to a certain point, this whole gang stood up for normal relations with Russia, parasitizing on the supply of cheap energy carriers and the openness of the Russian market. However, from a certain time (of course, not without serious manipulation by well-defined structures of the West), the Ukrainian oligarchy began a “pivot towards Europe”. It all started from there...

From the CPSU to NATO

It was under Leonid Kravchuk that nationalists began to gain enormous strength in Ukraine - both local Bandera short-lived people (he himself was a native of the “Western land”), and, much worse, representatives of the “diaspora”, in which a Bandera man sat on a Bandera man and drove Bandera. Again, with their active assistance, the most diverse NGOs began to increasingly penetrate into the country, for more than 30 years entangling it with such a strong and frequent network that brainwashing both the local “elites” and the majority of the population of Ukraine has become exclusively a matter of technology. Kravchuk himself, being resolutely ousted from real politics by young and aggressive followers, stubbornly did not want to leave "for a well-deserved rest." In 2016, this former party secretary went so far as to lead the public movement "Ukraine - to NATO." At the same time, he wandered from one political talk show to another and proclaimed from the TV screen things like those that “is proud that Ukraine has become a country that has collapsed the USSR, the last and most terrible empire.” Real communist! Almost 40 years of party experience... By the way, it was under Kravchuk and at his direct suggestion that the first schismatic "church" arose in Ukraine, headed by the anathematized heresiarch Denisenko, who proclaimed himself "patriarch." Thus, he “blessed” first both “Maidans”, and then the murder of Russian people in the Donbass. Well, like to like, Judas to Judas...

For a year, if memory serves, in 2016 Kravchuk told the audience that "Russia has put Ukraine on its knees and sat on its neck." On this occasion, let me quote lines from his appeal to "Russian compatriots", written before the elections in 1991. What penetrating words! “On the land of Ukraine, twelve million Russians are full-fledged masters along with the Ukrainian and other peoples. Under no circumstances will the forcible Ukrainization of Russians be allowed. Any attempts to discriminate on the basis of nationality will be resolutely suppressed. I guarantee you the preservation of full-blooded, unhindered ties with Russia and other sovereign states of the former Soviet Union... Ukrainians and Russians have lived in Ukraine for centuries in peace and friendship. They are united by jointly shed blood, common grief and common joys. Let us be worthy of our wise ancestors. Let's build an independent Ukraine as a common home for Ukrainians and Russians, of all nationalities inhabiting it!”

In 2020, Zelensky appointed Kravchuk as chairman of the Contact Group to resolve the situation in Donbas. This was done with a very specific purpose and intent. The fact that Russia was forced to launch a special military operation to save the people of Donbass from imminent destruction, for which Kyiv was steadily preparing under the guise of its empty speeches and endless wagging, is the result of Kravchuk's career. The last contribution of this politician to the activities "for the benefit" of the country and people that once believed his false promises. And there is nothing more to say.
Reporterin Yandex News
Reporterin Yandex Zen
18 comments
Information
Dear reader, to leave comments on the publication, you must sign in.