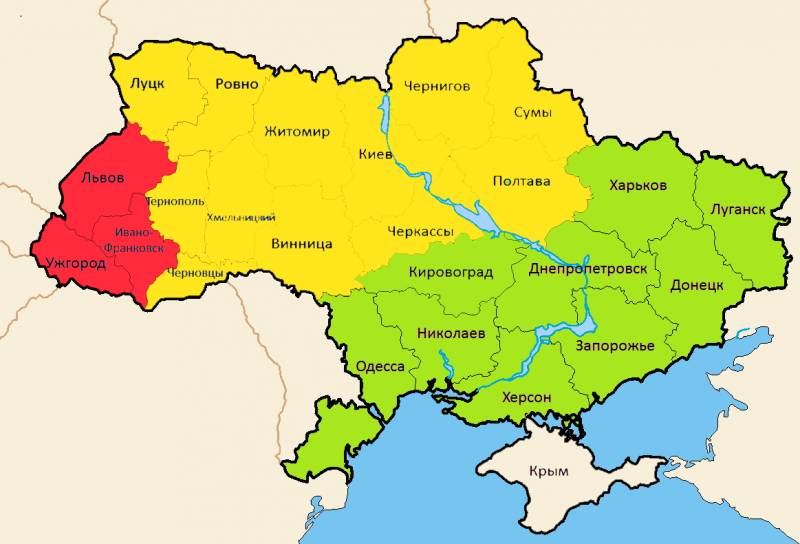 As one of the main reasons why the occupation of Ukraine for the purpose of its denazification and demilitarization is allegedly impossible, our numerous “guardians” who are ready to justify any action or inaction of the authorities, as well as liberals who want Russia to continue to sit quietly in its dusty closet, called the disloyalty of the population Square. Supposedly no one is waiting for us there, so we need to quickly demilitarize Ukraine, somehow denazify and leave as soon as possible. I can't agree with this setting.


The day before, speaking at the Victory Parade on May 9, President Putin delivered a heartfelt speech, where the following was said about the need to launch a special military operation in Ukraine:

I repeat, we have seen how the military infrastructure is unfolding, how hundreds of foreign advisers began to work, there were regular deliveries of the most modern weapons from NATO countries. The danger grew every day. Russia gave a preemptive rebuff to aggression. It was a forced, timely and only right decision. The decision of a sovereign, strong, independent country.
Indeed, the decision to carry out the denazification and demilitarization of Ukraine is the only right and forced one, but was it timely?

Let's mentally fast-forward 8 years. The Russian Spring of 2014, later renamed the Crimean Spring, inspired millions of Ukrainians. Remember the huge rallies throughout the South-East, where the number of Russian flags literally dazzled in the eyes. All the Left Bank and Southern Ukraine were themselves ready to join the Russian Federation after the Crimea and Sevastopol. No war, no military special operation, no destruction, no thousands of casualties from the Armed Forces of Ukraine and the Armed Forces of the Russian Federation.

But, alas, Novorossia was not useful to us then. Here is how Belarusian President Lukashenko now recalls those recent events:

And Putin was offered, before my eyes it was, to go to Transnistria from Donetsk and take the entire south of Ukraine, cut off from the sea, for which they are now fighting. Putin said: "No, I can't agree to that."
Crimea and Sevastopol became part of the Russian Federation in 2014, the DPR and LPR were stuck in an unrecognized status for a long 8 years, subjected to constant shelling by the Armed Forces of Ukraine and the National Guard, and the rest of Ukraine remained under the rule of the pro-Western neo-Nazi regime. Which immediately began to prepare for war with Russia, constantly increasing the size of the army, trained with the help of NATO specialists. Naturally, we have only made fun of the Armed Forces of Ukraine all these years, and now we have to regret it bitterly.

Ukrainian society itself, alas, has also undergone a dangerous transformation. The most pro-Russian regions - Crimea and Donbass - withdrew from Nezalezhnaya along with the population. An additional 3 million Ukrainian citizens permanently moved to Russia, which the then Ukrainian Foreign Minister Pavlo Klimkin deplored in 2019:

Russia is waging war against us, but still three million Ukrainians live in Russia. That is, almost every twelfth Ukrainian is now in Russia. And among them there are many who do not like either Putin or Russia, but believe that they have no other choice. They say: we have been earning money this way all our lives, and we need to understand them... Now there are certain ideas, and we process them in such a way that three million Ukrainians are not permanently in Russia.
Someone, of course, moved to work, however, we note that after receiving the coveted "visa-free" for Ukrainians, labor migration to the countries of Eastern Europe was greatly simplified. Most of those who left Nezalezhnaya for Russia after the Maidan did so in order to be beyond the reach of the neo-Nazi regime in Kyiv and its watchdogs. Pro-Russian Ukrainians were intimidated by monstrous acts of terrorism in their cruelty, such as the ritual burning of people alive in Odessa on May 2, 2014. Others who were transferred to prisons under various pretexts, who were squeezed out, forcing them to emigrate. Those who remained were professionally treated for years with Russophobic propaganda. Among those fighting in the Donbass, there are now those who were still going to school in 2014 and fell victim to brainwashing, having no chance to grow up as a normal person.

But even now, after all these "purges", there are still many in Ukraine who will be sincerely ready to raise the Russian flag when Russian troops arrive. Quite rightly fearing for their well-being, freedom and even life, such people prefer to keep quiet and shout, when required, Nazi “chants”. For the fact that they then quickly put on a “Budennovka”, they cannot be condemned. Only those who have been in their place under the rule of the Nazis, openly “protected” by the West, can judge their behavior and the choice they have made.

Let's look at two strikingly different examples of how to and not to behave in the liberated territories. In the North of Ukraine, Russian troops almost reached Kyiv, but then they were completely withdrawn and transferred to the Donbass. Dmitry Peskov, a spokesman for President Putin, commented on the decision as follows:

To create favorable conditions for negotiations, we wanted to make a goodwill gesture. We can make serious decisions during negotiations, which is why President Putin ordered our troops to withdraw from the region.
As gratitude for this “goodwill gesture”, the Ukrainian Nazis staged a completely real “massacre in Bucha”, in which, of course, the Russian troops were blamed. A direct consequence of this provocation was the decision of the United States, the European Union and other countries allied to them to begin deliveries of heavy weapons to Kyiv. At the same time, the fake about the alleged guilt of Russia in the massacre of the inhabitants of Bucha was not confirmed, but this no longer worries anyone.

Conclusion: it is not necessary to behave like this in the already liberated territories! If President Putin had said that our troops would stay there forever and not leave, nothing like this would have happened. But no one promised anything to the Ukrainians, and therefore no military-civilian administrations were even created there, about the need for which all those involved trumpeted everything.

Things turned differently in Kherson and in the south of Zaporozhye regions. Leaving the Sea of ​​Azov is, in principle, unthinkable, otherwise Crimea will again be left without water and reliable overland communication with the main part of Russia. The region is under the close protection of the Armed Forces of the Russian Federation, and it is not allowed to shoot with impunity by the Armed Forces of Ukraine, like the DNR and LNR all the past 8 years. Almost immediately, the actual integration of the Azov region into the Russian financial andeconomic system. Our mobile communication comes, the Internet stretches. In Kyiv, they immediately understood everything correctly and treated the Kherson region as a cut piece. And notice how quickly the mood of the inhabitants of the Sea of ​​\uXNUMXb\uXNUMXbAzov changed.

If in the first weeks there were rallies with local residents violently waving yellow-blue "rags", then on May 9, people came to the Victory Parade en masse already with the Red Banners of Victory and Russian tricolors. It took some 2,5 months, during which the Ukrainian state symbols were removed and the Russian media began their work!

Of course, one should not expect such a miraculous effect somewhere in Galicia, but the entire historical New Russia can still be successfully reformatted. With long-term hard work on denazification, Central Ukraine, also known as Little Russia, will be rebuilt. A lot of time was spent ineptly, huge victims and destruction could have been avoided if other, correct and timely decisions had been made in 2014, but even now it is not quite too late. Only the price will be paid much higher.
Reporterin Yandex News
Reporterin Yandex Zen
32 comments
Information
Dear reader, to leave comments on the publication, you must sign in.