Why Ukraine is difficult to call a Nazi state 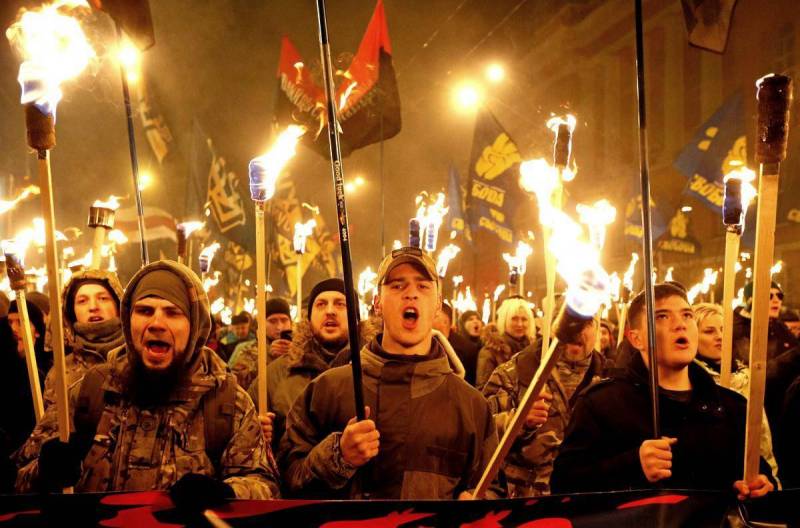 The project "Ukraine" - there is a project, of course, anti-Russian and even Russophobic, but it is definitely not Nazi in the full sense of the word. Why? First, let's figure out what Nazism is in general. If we take classic Nazism (or neo-Nazism), then it is usually based on five pillars.


Firstly, this is the idea of ​​national-ethnic exclusivity with the ensuing xenophobia and infringement of the rights of all "other" racial and ethnic groups, except for the titular one. Secondly, it is the desire to preserve certain traditions. Thirdly, the absence of an oligarchy as a phenomenon. All large capitals are subordinated to the interests of the nation in the person of an authoritarian leader or organization (party). Fourth, rejection of all forms of globalism. Fifth, biologization policy.

Why is none of these signs applicable to Ukrainian territory?

To begin with, it is necessary to state one simple, but most important fact: there is no ethnos as such on Ukrainian territory (from the Greek “ἔθνος” - “people”), and, accordingly, the nation, because the nation, as is known to those who have not skipped couples according to political science, this is a politically organized ethnic group (the highest form of such an organization is the state - this is a bonus for enthusiastic humanitarians). "Ukrainian people" is a "laboratory" construct, a project created artificially and "sharpened" for the fulfillment of certain goals and objectives. The essence of this project, in short, to be "Anti-Russia". Historical documents abound in evidence of the inconsistency of the theory that Ukrainians are a separate people. A lot of works have been written about this, so there is no point in going into the “wilds” of historiography and ethnography in this article. I will give as an example only a few ethnographic maps and documents compiled back in the XNUMXth-XNUMXth centuries, from which it becomes obvious even to a graduate of a modern school that the whole world, as well as domestic science, considered Little Russians (the so-called "Ukrainians"), Belarusians and Great Russians as one whole - the Russian people.

Everything changed a lot after the beginning of the national experiments of the Bolsheviks, when myths began to be created about separate (“fraternal”) peoples and about “terrible Great Russian chauvinism”.

But even if you don’t give a damn about facts and common sense, and agree with the existence of a “original Ukrainian people”, and with the fact that the Slavic population of Ukraine is a separate ethnic group, and Ukrainians are a nation, then in order to consider the Ukrainian state as a Nazi (neo-Nazi) one needs find a match for all items. What do we actually see?

First, there is no xenophobia and dogma about exclusivity. On the contrary, the president of Ukraine is an official Jew, the previous president is an unofficial Jew, Kolomoisky, who is considered Zelensky's overlord, is also a Jew. The deputies of the Verkhovna Rada, where the hero of Ukraine with African roots, Jean Beleniuk, is also conveniently located, are generally a living embodiment of the international. By the way, until recently, the former president of Georgia, Mikheil Saakashvili, was the governor of the Odessa region and a prominent figure in Ukrainian domestic politics. Separately, we need to remember the number of visitors from Africa, the Middle East and other regions of Asia: students, specialists, tourists.

Secondly, there is no need to talk about the preservation of traditional values: Kyiv, Kharkov and other cities of Ukraine are participants in gay prides and other LGBT events. Schools in Ukraine promote gender, “sexual education” of children and other non-traditional values. And the desire to join the European Union, where the LGBT agenda is one of the key spiritual factors, does not fit into the classical understanding of the Nazi state and society, which denies homosexuality as a norm.

Thirdly, oligarchs are perhaps the most common topic of discussion among ordinary citizens of Ukraine. Rinat Akhmetov, Viktor Pinchuk, Igor Kolomoisky, Petro Poroshenko, Konstantin Zhevago are the most famous Ukrainian oligarchs, among whom almost all economy Ukraine from amber mining to oil refining. In the Nazi state, all the interests of business are subordinated to the interests of the nation in the person of the leader or the party. In the case of Ukraine, the opposite is true. Not a single Ukrainian doubts that there is an oligarchy in Ukraine, as evidenced by the attempts to adopt a law “on deoligarchization” and the reaction to such attempts by the population, which does not believe that even this will somehow help throw off the yoke of the oligarchy, as evidenced by opinion polls.

As a matter of fact, Zelensky himself never denied the existence of such a yoke, publicly ridiculing him from the stage of Kvartal-95, and in his propaganda series Servant of the People, where he demonstrated in a grotesque form the state of Ukrainian domestic politics, completely dependent on the oligarchs.

Fourth, there is no need to talk about Ukraine's rejection of globalism either. The IMF, the World Bank, UNESCO, global funds promoting a leftist Western agenda are all connected to what amateurs call the Ukrainian state. Instead of a proud struggle for independence from the world's decision-making centers, there is blind obedience and constant looking back at the "adopted" older brother. Let me remind you that by the beginning of World War II, Nazi Germany withdrew from the League of Nations and dictated its terms to world hegemons like the British Empire, France and the United States, thanks to which both the Munich Agreement and the Anschluss of Austria were successful.

As for the last pillar, then, Nazism (as well as neo-Nazism) is the biologization of politics. The Nazi state divides society into desirable and objectionable based on biological principles: holy fools, children from mixed marriages, people with “wrong” roots: all of them, from the point of view of the Nazi state, are “superfluous” in the state, with all the ensuing consequences.

On Ukrainian territory, they are divided according to only one principle: Russian or anti-Russian (namely, not non-Russian, but anti-Russian). It doesn't matter if you are a Chechen, Georgian, African, Jew or even a native Muscovite - if you are against Russia, then you will be your own for Ukrainians. It is called Russophobia, anti-Russian chauvinism, if you like, but not Nazism in any way, because aggression is directed only at the bearers of a specific political and cultural-historical idea (not even an ethnic group, since the ethnic difference between the inhabitants of the eastern regions of Ukrainian territory and the Great Russians in Russia is not always noticeable even to the naked eye).

Since technically (and indeed) there is no Nazism on Ukrainian territory, there can be no effective fight against it, and no informational struggle (propaganda) will have the desired effect in the territories controlled by Kyiv and liberated by our army. The result is already visible: masses of videos from the youth of Ukraine, where they unanimously (in half of the cases in Russian) claim that there is no true Nazism in Ukraine.

What will it give us?

Firstly, a fair (also meaning historical justice) justification for the conduct of hostilities at all times greatly raised the spirit of the army and the people.

Secondly, the fight against what is thoughtlessly called the Ukrainian state is the key to the destruction of that collective unconscious, which for so many years has been systematically fed on the territory of Little Russia and New Russia by our Western partners. The massive debunking of myths about the origins of Ukrainian "statehood" on television, newspapers and radio, in education, replacing the Ukrainian visualization of space with Russian (language and street names, other place names, monuments and monuments, signs, documents, and much more) will very quickly bear fruit - the region will again become Russian in some 3-5 years and will not cause such problems in the future. An example of this is the Crimea, where in 5 years the Ukrainian myth has finally disappeared, as if it had never happened at all, and a few “Svidomo” are the exception rather than the rule.

Thirdly, the sounding slogans about the protection of the Russian-speaking population will have more grounds, because, formally, in Ukraine there is no direct responsibility for speaking Russian, but everything is being done to de-Russify the region as much as possible. This includes the adoption of laws on broadcasting on TV, and the abolition of teaching in Russian in schools, and the promotion of the idea that "mova" is native, and they do not speak it, they say, allegedly due to the fact that "Moscow constantly Russified Ukraine ".

The struggle for traditional Christian values, with which Ukraine is at war, will also fit the concept of restoring justice.

Such a position will make it possible to attract not only ordinary citizens, but also fighters of the Armed Forces of Ukraine, who, as you know, for the most part do not particularly share the “European” trends of Kyiv, but, not really seeing the difference between the parties, choose the one that is more familiar. An obvious plus from such an ideology of the special operation will be the growing popularity of Russia among the conservative pan-European movement, which is in opposition to the leadership of the European Union and NATO. Importantly, this part of society is the most mobilized, militaristic in the EU, and does not particularly feel sympathy for modern democracy and “freedom of speech”.

And the change of the ideological course from “left” to “historically and logically justified”, from “fight against fascism” to “Russian irredenta” and “protection of tradition” will unequivocally turn the eyes of tens of millions of people towards Moscow. Otherwise, even after the completion of the NWO with a complete victory, Russia risks getting the same problem, but later, and history, as you know, does not forgive the repetition of mistakes.
Reporterin Yandex News
Reporterin Yandex Zen
90 comments
Information
Dear reader, to leave comments on the publication, you must sign in.