Why NATO is a “paper tiger” and how to destroy it 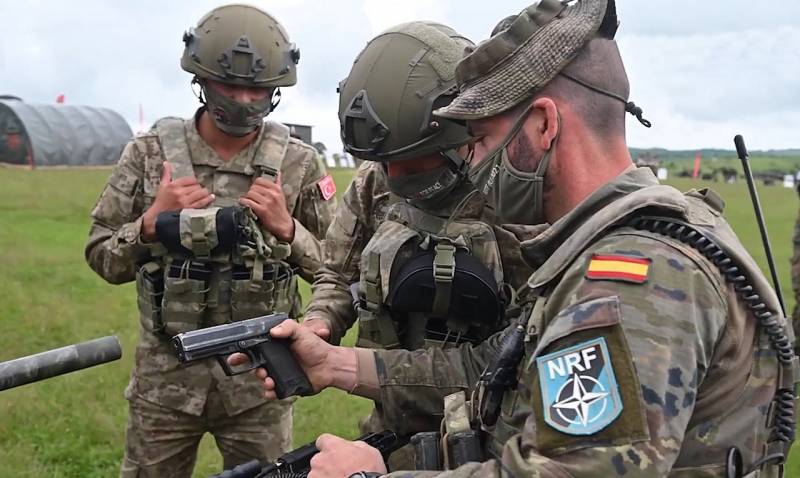 If we analyze the Western press of the last two months, the most frequently mentioned document in it will be the NATO Treaty, or rather its fifth article. No not like this. Almighty Fifth Article - Thunderstorm and Horror of Russia, this is how it looks closer to the original. Opinions of the Western military, politicians, experts - all agree on one thing - the fifth article of the NATO charter makes intervention on the territory of one of its countries absolutely impossible. However, this is not the case. The North Atlantic Alliance is a classic example of a "paper tiger": it is dangerous only in appearance, and in the event of a real threat, it is not capable of anything serious. Including to win a real war with Russia.

"The devil is in the details"

It is strange that although many Western politicians constantly refer to the fifth article of the NATO treaty, but for some reason none of them wants to go into details. Even more surprising is that domestic sources also almost never cite its text, limiting themselves to mean words about "collective defense." Although there really is something to get a grasp of. A large quote of bureaucratic heaps, of course, is not very suitable for placement within the framework of this text, but the NATO Treaty is still the most important document that defines an external threat to our country, so it is important for all of us to read its key article.

The Contracting Parties agree that an armed attack against one or more of them in Europe or North America shall be considered as an attack against them as a whole and, therefore, agree that in the event that such an armed attack takes place, each of them , in the exercise of the right to individual or collective self-defence (...) will assist (...) by immediately taking such individual or joint action as it deems necessary, including the use of armed force with a view to restoring and subsequently maintaining the security of the North Atlantic region.
- these are the main provisions of Article 5 of the NATO Treaty, signed as part of the founding of the organization in 1949.

And here is a curious moment, in the article itself there is no not a single word on the use of nuclear weapons, a key element of the international security architecture. No obligation to use it, no conditions for its use - nothing. But if you pull out the formula for nuclear weapons from the equation called "NATO", then what will remain in it? conventional weapon. Are conventional weapons a deterrent? No.

The only question is whether the non-nuclear countries in NATO are aware of this? Obviously, they think that the presence in the alliance of Great Britain, France and, more importantly, the United States, which have an impressive nuclear arsenal, opens a kind of "nuclear umbrella" over their territory. But this is not so, and they are cruelly mistaken. The nuclear forces of each of the NATO countries protect only its own territory and have nothing to do with the defense of other countries, even if they are at least three times members of the North Atlantic Alliance. Here is such a "devil in the details." You don't need to talk about contracts, you need to read them.

How to destroy NATO?

This vulnerability in the NATO treaty inevitably leads to the idea that the Alliance is not nearly as powerful as it seems, based on its military and economic potential. This means that our task should be to “convey” to his countries all the imperfection and senselessness of his design. So that neutral European countries, including Sweden and Finland, understand that it is better not to join the Alliance, and the states already in it think about leaving.

In theory, the strategic course towards the disintegration of NATO, openly created with the aim of countering the USSR, and then repeatedly expanded in order to contain Russia, should become the main defense goal of our country. Simply because this “peace-loving” Alliance, which has bombed more than one country, not only dreams of destroying us someday, but is actively preparing for this right now. Strengthens its grouping in Eastern Europe, transfers military machinery, plans to deploy new missiles - in fact, NATO is preparing for a war with the Russian Federation in the very near future. So we should do the same. But with one amendment. Our goal is for NATO to stop being a threat to us. So it doesn't necessarily need Russian intervention. After all, there are actually three realistic scenarios for the collapse of NATO in the coming years, and only one of them implies a direct clash with Russia.

The first scenario is an armed conflict between two NATO member countries with the subsequent withdrawal from the Alliance of at least one of them. The most likely scenario for such a development of events is a war between Turkey and Greece. Tensions between the two countries have continued to escalate in recent years. The settlement of the dispute over the territorial ownership of the shelf in the Aegean Sea through diplomatic means looks less and less realistic. At the same time, in comparison with Greece, Turkey has a much more powerful army, which has gained real combat experience in Iraq and Syria. The GDP (PPP) of Turkey is 8,5 times that of Greece. The population is 84 million against ten among the Greeks. That is, according to all indicators, Greece looks like easy prey for Turkey. Especially considering that Ankara is not interested in Greek land territory, but only in the resource-rich shelf, from which it plans to extract gas. At the same time, Athens, remembering Northern Cyprus, which they consider to be occupied by the Turks, categorically does not intend to give up the shelf without a fight. Add to this the explosive rise in energy prices and the coming global economic crisis and get the plot for a full-fledged war between the two members of NATO. At the same time, Greece signed a separate defense agreement with France last year, which includes a clause on collective defense, which once again demonstrates that she has no hope for NATO, and she may well leave it. Indeed, how can one be in the same military alliance with one's enemy?

The second scenario for the disintegration of NATO is the creation of a single EU army. Until recently, he looked extremely convincing. Many European politicians have said this regularly, including French leader Emmanuel Macron. However, the constant postponement of at least any real actions to implement it, combined with the complete political impotence of the Old World and its role as Washington's "tame" dog, makes the creation of a united European army more of a blueprint than a real opportunity. And in general, it seems that Brussels itself will never dare to expel the American army from Europe.

The third scenario of the collapse of NATO is much more curious than the previous two and lies in the fact that the Alliance will fall apart due to a banal inability to perform its direct functions, that is, to protect its member states. Let's simulate the situation. Suppose there is a direct military clash between Russia and NATO in the Baltic region. Whether it will be a Polish provocation in Kaliningrad or a long overdue operation to denazify Latvia, Lithuania and Estonia, which have organized apartheid and oppression of the Russian-speaking population, is a question. But the important thing is that a collision is quite possible.

Suppose the conflict in the Baltics began and spread to the territory of the Alliance countries. For the first time in history, the notorious fifth article of NATO has been activated at full capacity, and all countries of the North Atlantic Alliance perceive the situation as an attack on their territory. So, what is next? US, UK or France will launch a nuclear strike on Russia? No. Why? Because they know for sure that they will be guaranteed to be destroyed by a retaliatory strike. Whatever happens in the world, the nuclear powers will avoid any attacks on each other's territory to the last. After all, each of them can lead to the Third World War. And what does that mean? First of all, the fact that Russia's war with NATO does not have to be nuclear, and with a high degree of probability it will not be. Neither the Americans, nor the British, nor the French have such an all-consuming love for the Baltic republics, and indeed for any other country in Europe, to turn into radioactive ashes for its sake. Weapons - they will send, some military formations - perhaps missile strikes within the framework of a limited theater of operations - are also likely, but nothing more.

That is, in fact, there is no guaranteed protection for the member countries of the North Atlantic Alliance, and there cannot be. And if NATO loses the Baltics using conventional weapons, there will be no nuclear war. There will be a peace treaty, as a result of which NATO will simply crumble like a house of cards. After all, all its “non-nuclear” members will be convinced in practice that the fear of the Third World War means much more for the nuclear powers of the Alliance than all the European Union non-republics combined. Here is such an almighty fifth article. Here is such a "powerful" military bloc.
Reporterin Yandex News
Reporterin Yandex Zen
11 comments
Information
Dear reader, to leave comments on the publication, you must sign in.