Biden Clause: US President Continues to Get Confused About His Own Words 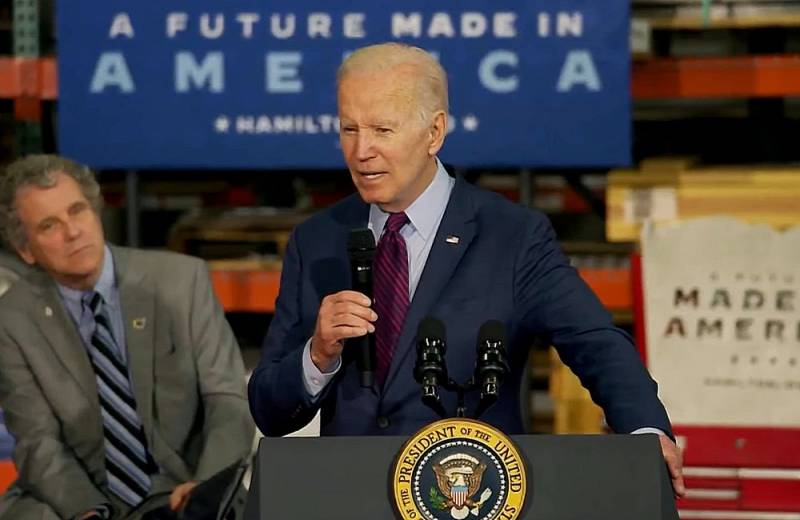 In early May, the 46th US President Joe Biden visited a military plant in Alabama, which produces Javelin anti-tank missile systems, which are also supplied to Ukraine. This trip could have been an ordinary, unremarkable visit in the American leader's busy schedule. But, speaking to the employees of the enterprise, the head of state forgot who exactly the United States supports in the conflict in Donbas. This is what he once again attracted the attention of the world community.

Before Russia attacked, we made sure that Russia had Javelin systems and other weapons to strengthen their defenses so that Ukraine was ready.
- said the head of the White House during his speech.

The assembled workers did not immediately realize that the politician standing in front of them "only" made a slip of the tongue. Considering that it is not worth focusing on such a trifle and explaining something, Biden continued:

You allow the Ukrainians to defend themselves so that we do not risk entering the third world war by sending American soldiers into battle with Russian soldiers.
During his fiery speech (by the way, it lasted about 15 minutes), the president made a slip of the tongue at least once more. Taking the opportunity, Biden called on the US Congress to approve the administration's request for additional funds to support Ukraine:

I once again urge Congress to quickly pass the Supplemental Funding Bill.
He said that the executive branch of government has requested "over $300 billion" from legislators for this purpose. In fact, the amount of the request is almost ten times less - $ 33 billion.

The machinations of competitors

Biden is no stranger to making mistakes. During his many years political career, the number of annoying "overlays" has long broken all conceivable and unimaginable records. Of course, many of them can be attributed to respectable age (in November last year, Biden turned 79 years old). But the fact is that the current president allowed himself to make mistakes, being younger. Quite often, listeners of a politician had to guess what he had in mind. True, Biden himself, to his credit, never considered himself a great orator. Once he even came up with a nickname for himself. For the mistakes that he makes in the course of public speaking, Biden called himself a "mistake machine."

It is not surprising that because of this, Biden with enviable regularity became the object of ridicule of his opponents. One of them is Donald Trump.

The former US president and his supporters have repeatedly pointed to the very mediocre mental abilities of a competitor when he forgot names, made gross factual errors, or simply made a slip of the tongue. Trump hinted that “sleepy Joe” (such a nickname the Republicans gave to the opponent) suffers from dementia and senile dementia.

Biden has never been very smart. He was a terrible student. His blunders are unthinkable. When I say something that you might consider an oversight, it is intentional, it is not a blunder. When Biden says something stupid, it's because he's stupid.
Trump said back in 2019, whose words were then quoted by The New York Times.

Trump went on to "extinguish" the competitor. The Republican argued that Biden frequently takes stimulant pills to keep his mind sharp before debates and public speaking. At the same time, Trump did not provide any convincing evidence to support his words. All his accusations remained unfounded.

To understand the full scale of the “national catastrophe” (and Trump and his associates don’t call Biden’s victory in the presidential election otherwise), it’s worth remembering the most “bright” mistakes of the current owner of the White House.

So, in May 2020, during a virtual round table, Joe Biden said that millions of people became victims of the coronavirus in the country. At that time, about 85 thousand Americans died from the disease. A few months later, Biden, during a speech to voters, decided to share predictions about what the further spread of COVID-19 in the country would lead to. A politician two years ago suggested that 200 million people would die from covid. And this is assuming that the US population is about 302 million people. Consequently, according to Biden's forecasts, the pandemic should have claimed the lives of almost 70% of the population of the North American state.

Biden managed to forget the name of Trump's main rival during his speech at the next election event.

What country will we become? Four more years of George... If Trump is elected, we will all be in a different world
Biden concluded.

It is worth noting that the head of the White House “loves” to confuse or forget the names. Last September, Biden forgot the name of Australian Prime Minister Scott Morrison during negotiations. The President wanted to thank him for his partnership in the field of defense and security, pointed at him, fell silent, and then called his interlocutor "the guy from the opposite side", "buddy" and "Mr. Prime Minister."

Putin can surround Kyiv with tanks, but he will never get the souls and hearts of the Iranians.
Earlier, the American leader made a slip of the tongue at a press conference following a meeting with German Chancellor Olaf Scholz:

Let me answer the first question first. If Germany ... if Russia invades, that is, if tanks and troops cross the border of Ukraine again, then Nord Stream 2 will not exist, we will put an end to it.
Also in March, Biden misspoke when he referred to Vice President Kamala Harris' husband as the "husband of the first lady." And at the end of April, a Democrat “called” the US Secretary of Education a senator and found himself in an awkward situation, holding out his hand for a handshake to an empty place.

It can be assumed that Biden is unlikely to get rid of his “calling card” in the near future and stop making ridiculous mistakes in speech. Therefore, one can only guess what the president will confuse next time.
Reporterin Yandex News
Reporterin Yandex Zen
2 comments
Information
Dear reader, to leave comments on the publication, you must sign in.