Ukraine may unite with Poland in "Rzeczpospolita 3.0" 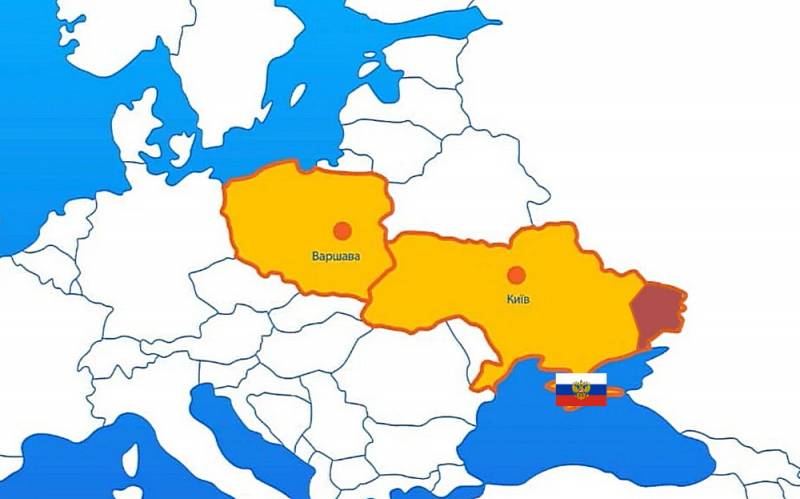 Perhaps the main политическая the topic of recent weeks is a possible attempt by Poland to return back its Eastern Creshes, a significant part of which falls on the territory of Western Ukraine. A lot will depend on whether this actually happens or remains at the level of "trolling" Warsaw, for the further development of the Russian special operation. How should Moscow react to the arrival of Polish peacekeepers in Galicia and Volhynia?


To begin with, I would like to make a small digression and give the hypothesis of the Ukrainian-Russian video blogger Mikhail Onufrienko, who has become very popular lately thanks to the daily information coverage of the course of the NWO and the events associated with it. According to him, the powerful grouping of the Russian Armed Forces, which was recently hastily withdrawn from the north of Ukraine and transferred to the Donbass, still does not participate in the battles. The unhurried offensive that is now taking place is carried out by the same forces that were at the disposal initially. This is clearly not yet a “Great Battle”, and Onufrienko suggested that Moscow is simply waiting for Warsaw to decide to send troops into Western Ukraine, and then the long-awaited large-scale offensive will begin.

Well, the hypothesis is quite working, and only life will confirm its falsity or fidelity. Now let's move on to the Eastern Creses.

The day before, the President of the Republic of Poland, Andrzej Duda, made an extremely significant statement:

For decades, and God forbid, for centuries. Ukraine is a brotherly state for Poland, and, as, I hope, Vladimir Zelensky prophetically said, there will be no more borders between our countries, Poland and Ukraine. This border will no longer exist! So that we live together on this earth, building and rebuilding together our common happiness and common strength, which will allow us to repel any danger and any possible threat.
Many people both in Poland itself and in Ukraine took this as a hint at the possible annexation by Warsaw of the territories of Galicia and Volhynia, which not so long ago were Polish by historical standards. Some historical references are given by numerous billboards, which are now hung all over the republic, with a quote not from some retired, but from the current Polish general Yaroslav Mik:

Time to remember history.
The fact that plans are being worked out in Warsaw for the possible entry of troops into the territory of Western Ukraine, said the head of the Foreign Intelligence Service of the Russian Federation Sergey Naryshkin:

The first stage of "reunification" should be the entry of Polish troops into the western regions of the country under the slogan of their "protection against Russian aggression."
In general, this is no longer the idle chatter of jingoistic bloggers, journalists and political scientists. It should be noted that President Duda was the first to raise the issue of bringing some NATO peacekeeping forces into Ukraine, but the bloc's allies did not support the idea. But Poland itself mobilized its army and pulled it to the western border of Ukraine under the pretext of military exercises.

At first glance, everything is ready for the Eastern Cresses to return to their "native harbor", but this is only for the first time. Still, there are no direct analogies with the Crimean scenario, and here's why.

At first, in Crimea, the population was objectively pro-Russian and indeed massively voted for reunification with the Russian Federation, no matter what our enemies and domestic liberals who joined them say. There is no such thing in Galicia and Volyn. Many locals are justifiably terrified of the problem of restitution, when the former owners of real estate and other assets will come and ask the current ones to leave. About 100 applicants have already gathered in Poland to review the results of the “banderization” of the Eastern Kresy. More importantly, the arrival of the Poles terrifies the local Western Ukrainian elites, who understand that they will be pushed back very quickly. Of course, there are also pro-Polish forces, but the Westerners will not come out en masse with a red and white flag to meet Polish peacekeepers.

Secondly, at the moment there are no formal reasons for the entry of the Polish Army into Western Ukraine. The Russian army is bogged down in positional battles on the Eastern Front and Galicia does not threaten in any way. If Warsaw decides to bring in peacekeepers now, then in Ukraine it will be quite reasonably perceived as intervention and occupation. At the same time, it should be borne in mind that on the Right Bank there is a rather powerful grouping of the Armed Forces of Ukraine and the National Guard, pumped up with NATO weapons, which, instead of bread and salt, may well meet the Polish military with fire if Kyiv itself does not approve their entry. Warsaw will definitely not go to war with Ukraine.

It turns out to be a kind of funny situation. If you believe Mikhail Onufrienko's guess, then Moscow is waiting for Poland to be the first to send troops to Western Ukraine. In Warsaw, they are clearly waiting for the RF Armed Forces to smash the Armed Forces of Ukraine and the National Guard to smithereens, multiplying them by zero, approach the border of Galicia and Volhynia, and then only Polish peacekeepers will have every reason to enter the Eastern Kresy to protect them. In general, if our strategists have such a plan for Ukraine, then it should be reconsidered.

It will be even worse if you have to quickly fuss, reacting to the implementation of other people's strategic plans.

If you carefully read the statement of President Duda, then between the lines you can see a different scenario for the accession of the Eastern Crosses than the simple entry of Polish peacekeepers. For understanding, it is enough to recall the history of Poland, linking it with the current situation in Ukraine.

Thus, the first Rzeczpospolita arose as a forced union between the Kingdom of Poland and the Grand Duchy of Lithuania. The Union of Lublin united two independent states into one (conf)federative state because of the “Muscovite threat”, when the Russian Tsar Ivan IV scared the Polish and Lithuanian gentry to death with a successful military campaign against Polotsk. Then it became clear to everyone that against “crazy Putin, sorry, Ivan the Terrible” alone, the Kingdom of Poland or the Grand Duchy of Lithuania cannot stand alone, it is necessary to step over pride and unite. The new state that appeared as a result of the Union of Lublin itself became a source of a permanent deadly threat to the eastern neighbor.

Today, too, there are all the prerequisites for a new union, now between Kyiv and Warsaw. Ukraine is not accepted into the NATO bloc, most likely, despite the talk, they will not be accepted into the European Union either. The Square is actively demanding security guarantees from "aggressive" Russia. At the same time, in Poland, many consider as their historical lands not only Eastern Cressy, but in general the entire territory of Ukraine to the Dnieper and beyond. Warsaw is actively promoting the Trimorye (Intermarium) integration project, in which, with the support of the United States, it intends to play the first violin.

As part of President Duda's proposal to remove the borders between Poland and Ukraine, the two countries may well be united into a confederal union (union), where Polish (NATO) troops can be stationed on the territory of Nezalezhnaya. The question is how Russia should react to this.

Accession to Poland of Galicia and Volhynia is assessed in different ways. Some regret the "Kemskaya volost", others even consider it a boon, realizing that Western Ukraine is a long-cut piece and a lot of water has flowed since the Middle Ages. But in any case, relying on the entry of Polish peacekeepers, building your own strategy from this, would be the height of naivety. But the scenario with the Polish-Ukrainian union would be an extremely unfavorable outcome for Russia.