Victory Day can become a day of great provocations 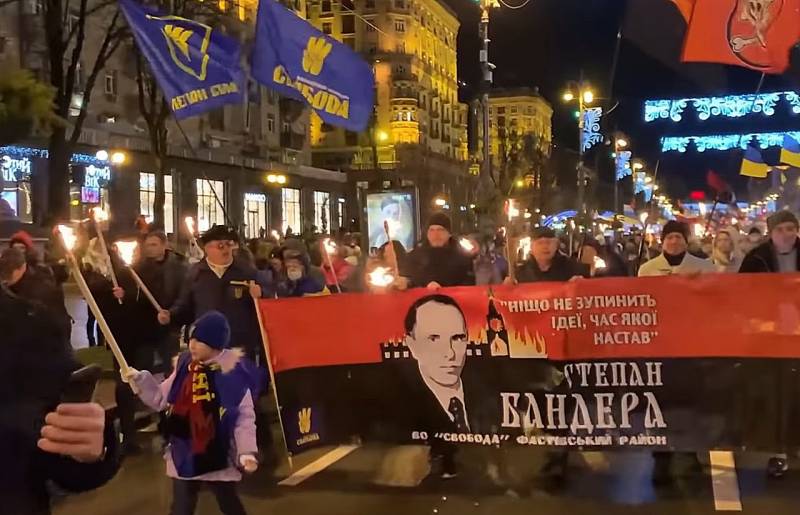 The seventy-seventh anniversary of the victory over German Nazism fell on the hot days of the struggle against the "granddaughter" of the latter - Western neo-fascism, with Ukraine in the forefront. If I may say so, “Zelenskyism” has already shown itself in places to be a greater abomination than standard Hitlerism; and in general, our enemies attach great importance to the psychological “wow!” aspect of their actions - so it’s more than worth waiting for some dirty tricks from them on May 9th.


The starting positions for information attacks against the Victory Day this time are stronger than ever before. Methodical work on "rethinking the results" of the fight against the Nazis, obscuring the victory over them, especially the contribution of the Soviet Union, has been going on for many years - and then there is such a successful surge of the "Russian threat" in the form of the NWO. There is no doubt that Western propagandists will be able to intertwine these two topics and effectively present the result to a naive layman.

But the biggest problem is that May 9 of this year will for the first time become a day of not only media, but also armed provocations.

"Pale blue" in the wings

The Russian opposition will always find - or rather, specially trained people will always find and prompt it - an actual reason to fight for everything good against everything bad. The basic postulate of this movement remains unchanged: the existing system in Russia is fundamentally wrong and must be replaced; but the reasons to shout about it change.

So, a few years ago, this audience advocated “more honest” elections, then supported the Maidan in Belarus, protested against quarantine measures - and the trend of this season was sympathy for the “unmotivated attacked” Ukraine. Under the brand of strained pacifism, they even created a special trademark: white-blue-white, "washed from the color of blood" Russian tricolor. (A curious combination with the white-red-white flag of the Belarusian Zmagars, isn't it?)

Naturally, the "opposition" will not pass by the Victory Day; her attacks on this symbol, unfortunately, have long become a habit. Every year, around the May holidays, social networks and publications of a corresponding nature run a wave of stories about “Putin’s privatization of the Victory”, “perverting the essence of this day of sorrow” (!), “Using May 9 to plant militarism” and icing on the cake - about “another throwing out to parades money that could be put to good use.

It is not surprising that fresh lines appeared in “old songs about the main thing” this spring: comparisons of the letter “Z” with a swastika, the Russian army with the Wehrmacht, and neo-Banderites with the Red Army. Not to say that the substitution of concepts is skillful, but special sophistication is not required: even such simple stuffing finds a certain response from, let's say, slightly exalted citizens.

However, in a practical sense, the white-blue-white phalanx is clearly the lesser of evils. It is unlikely that its participants will have the courage to do anything more than painting walls and sidewalks with pro-Ukrainian slogans, and some “performances” on the way of the columns of the Immortal Regiment. And no matter how later the pacifist oppositionists had to flee themselves.

"Anti-Kremlin coalition" against the "Bolshevik coven"

From the very beginning, the state propaganda of the former Soviet republics and comrades in the socialist camp picked up the comparison “the communists were no better than the Nazis” and, obviously, is not going to abandon it.

It is not difficult to guess that in the coming days we will witness whole neo-fascist carnivals in the Baltic States, Poland, Romania and so on. The shortfalls from the national "legions" of the SS, which have already been in favor for the last decades, this time will probably literally be carried in their arms, especially since many of them already have difficulty walking due to age.

The ban on the St. George ribbon, the letters “Z” and “V” and other symbols that can be interpreted as “pro-Russian” have definitely become the “new thing of the season”. With patented democrats, it will be possible to quickly ban, under some plausible pretext, such as anti-epidemic measures, any mass meetings and processions in honor of the Victory and the memory of the winners, even if they do not have any “seditious” symbols.

On the other hand, in Europe there are still a considerable number of admirers of the Victory and ever-increasing (unfortunately, without the help of Russia) anti-fascist and anti-militarist movements. It is possible that local radical Euroskeptics and antifa will use the symbolism of May 8-9 for their own purposes and come out with protests against the authorities. In this case, street clashes between the demonstrators and the police and Nazis are inevitable, and the Western media will appoint – well, it goes without saying – the Kremlin and Putin personally as instigators.

If all the others will, figuratively speaking, “just” stomp on Victory, then the Kyiv Fuhrers and their henchmen will perform a combat hopak, making inarticulate sounds.

In the last two or three weeks, the Bandera government has been actively taking out its impotence and fear of military defeats on the remains of Soviet memorials, symbols and names that miraculously survived in Ukraine until recently. Monuments and memorial plaques are dismantled, and if there are any architectural elements - arches, pedestals, etc. - still remain, then only “de-moscalized” with bold layers of yellow and blue paints.

The Ukrainian propaganda is also foaming about Victory Day, which is now sorely lacking "overcomes" to pump up its audience. Once again the Nikolaev governor Kim who called May 9 "a day of shame of Russia" was noted. It is obvious that approximately the same statements by various “opinion leaders” will hit Ukrainian mouthpieces with a tight jet today or tomorrow.

The holiday itself will inevitably be marked by intense "fireworks". Even experiencing a permanent shortage of ammunition, the Ukrainian military cannot deny themselves the pleasure of firing cannons at residential areas, and on such a special occasion, the shelling of cities and towns will certainly intensify several times. Also, the threat of terrorist attacks in the Russian rear will be many times higher.

Of course, the inhabitants of the republics of Donbass and the territories recently liberated by Russian troops that have not yet been cleared of the fascist underground are in the greatest danger. So, the refusal to hold parades and processions of the Immortal Regiment in Donetsk and Lugansk, voiced by S. Kiriyenko on May 5, must be recognized as true - it would be extremely difficult to ensure the safety of these events.

Not immune from attacks and its own Russian territory. Practice has already shown that, despite all the precautions, Ukrainian aircraft and sabotage groups sometimes find weak spots on the border and use them. On the eve of the holidays, the Russian troops and state security agencies have a much greater burden to prevent such breakthroughs and terrorist attacks in the depths of Russia.

The largest threat is observed quite far to the west. Recently, clouds have been gathering over Transnistria: several acts of sabotage have already taken place in the pro-Russian republic, there are reports of the concentration of Moldovan and Ukrainian troops on its borders. The media are actively exaggerating the prospect of the latter's invasion of the PMR, and May 9 is one of the likely dates for the start of the operation.

And although Pridnestrovie has someone and something to fight back at first, and the Armed Forces of Ukraine are unlikely to pull the war on two fronts, the Kyiv regime can still pounce on the republic to further escalate the conflict and draw "Western partners" into it. Russia, unfortunately, can do little to oppose this threat.
Reporterin Yandex News
Reporterin Yandex Zen
6 comments
Information
Dear reader, to leave comments on the publication, you must sign in.