With tears in my eyes... May 9 - political "broadcast" for Zelensky 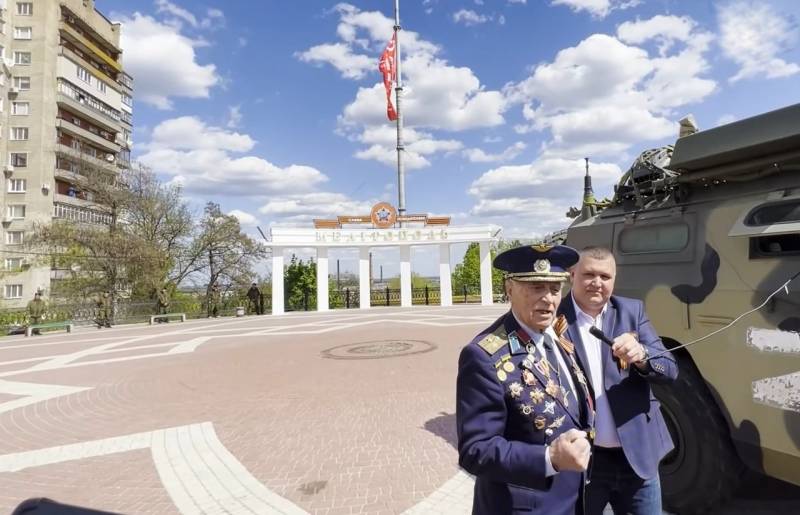 The current Victory Day will definitely be a holiday with tears in the eyes for all the sane, not crippled by Ukronazi propaganda and “patriotic” psychosis, residents of the territories controlled by the Kyiv regime. It is clear that it will not work to mark it as it should be, paying tribute to the memory of their heroic ancestors who crushed the horde of the Nazis and their numerous allies from all over Europe. Even an attempt to lay flowers at the monument to the Unknown Soldier is likely to end in failure under the current conditions. Well, there is no need to stutter about any mass events like the Immortal Regiment. The maximum is to commemorate the fallen heroes in the family circle at home, and then if there are no potential “informers” at the table ...


At the same time, however, considerable problems arise in connection with the onset of May 9 for the leadership of the “nezalezhnaya”. Modern political the context is such that the clown president and all his hangers-on find themselves on a real stretch between a bad and a very bad course of action. No matter what they do, they will fall under a flurry of indignation and criticism. Either from local brutalized "patriots" who no longer hide their essence, or from those who are trying to shout to the whole world, proving and arguing that Ukraine in its current form is not a "young democracy" at all, but the most natural totalitarian Nazi state. It is quite predictable that the clown gang that got into such an unpleasant situation intends to act by its favorite method - dodge, dodge and try to get out of it by any means - except worthy ones.

It would be surprising if the current situation was not taken advantage of primarily by those who, in fact, Russia had to start a special military operation to denazify Ukraine - the local most “frostbitten” supporters of neo-Bandera, that is, frankly Nazi ideology, and so already who put a lot of effort into erasing the holy holiday for every normal person forever from the minds and souls of Ukrainians. And above all, to remove it from the number of memorable dates celebrated at the state level. These scoundrels, of course, made a fuss and submitted a corresponding bill to the Verkhovna Rada: on the transfer of the official Victory Day from May 9 to May 8. The grounds are "the current actions of the Kremlin in Ukraine." The main author of such an abomination is a deputy from Poroshenko's Eurosolidarity, the former head of the Institute of National Memory Vladimir Vyatrovich, for whom a strong rope on earth and a capacious cauldron in the underworld have long been crying.

Celebrating May 9 Victory Day in Ukraine is illogical and unacceptable, especially after the start of a full-scale Russian invasion of Ukraine on February 24, 2022. Ukraine must honor the memory of the fallen and celebrate the Day of Victory over Nazism in World War II together with all of Europe and the entire civilized world on May 8th. And on May 9, together with the member countries of the European Union, celebrate Europe Day
- writes this Bandera last son in an explanatory note to his libel.

However, among his co-authors there are not only members of the Russophobic political gangs of Poroshenko and Golos, but also deputies from Zelensky's Servant of the People. Quite naturally. True, in the pro-presidential party they understand that it is perhaps too early to shove right through like this. After all, even the data of a survey conducted not so long ago by the Rating sociological group, which “drawn”, for example, support for the “derussification” of street names by more than 70%, indicate that everything is not so simple regarding the memory of the Great Patriotic War.

Thus, sociologists were forced to admit that at least 40% of Ukrainians oppose the dismantling of the monuments associated with it. Less than 20% of respondents approve of this vileness. Since Zelensky and his political forces are consistent populists, they will most likely be wary of speaking out against such a clearly expressed position of the “electorate”. On the other hand, there are already in full swing taking maneuvers aimed at “pushing” May 9 gradually, “on the sly”. Thus, the authors of the draft law on the transfer of cash payments to veterans of the Second World War (the term "Great Patriotic War" was banned in Ukraine long before the start of the SVO) and victims of Nazi persecution from May 9 to October 14, that is, on the "Day of Defenders and Defenders of Ukraine" , called by sane people "Banderite Day", are without exception people's deputies from the "green" political mold named after Zelensky. And, by the way, the “vox populi” does not at all prevent the authorities of the “nezalezhnaya” from systematically and consistently destroying the monuments of the Great Patriotic War one after another. At present, not a day goes by without reports of similar acts of vandalism perpetrated by the Ukronazi regime throughout the territory it controls, from east to west. As for the presidential administration itself, they preferred to make the following statement.

At the moment, the president's office has such an attitude towards this holiday that it is too early to celebrate Victory Day. Any ceremonial events, be it May 8 or May 9, are not a priority for the President's office right now. While this question is temporarily on the back burner...
These are the words of the press secretary of Zelensky Nikiforov. This figure also stated that “holding a military parade in a war is clearly inappropriate, especially since the military technique now more needed at the forefront." Also "for security reasons" there will be "no loud public events in the open air" involving mass gatherings of people.

Curfew instead of a holiday

This position reflects the great desire of the Kyiv regime, if not to cancel Victory Day, then at least to “curl up” it under the pretext of “shelling” and “provocations” allegedly being prepared on this date (from the Russian side, of course). Fortunately, the conditions of martial law make it possible to do this, as it were, on legal grounds. It is with this motivation - "in view of the danger of rocket attacks" - that a curfew, during which citizens are strictly forbidden to leave their homes, is introduced in Zaporozhye from 19:00 on May 8 to 5:00 on May 10. Similar "anti-victory" measures are going to be taken in Kharkov defiled by the Nazis. The actions of the mayor of Ivano-Frankivsk, who calls on the townspeople to leave the city on May 9, look ridiculous, since the Russians will most likely “hit it with rockets.” Who will need you on this day, Bandera trash?! In Kyiv, having decided in this way to prevent possible “spontaneous” attempts to celebrate Victory Day, they are most concerned about how it will be celebrated where the Ukronazis have already been kicked out with a bang. Having obviously sniffed hard, Zelensky on this occasion began to issue new ultimatums to Russia:

If on May 9 the Russians will hold their parades in the occupied Ukrainian cities, it will be their big mistake - they will put an end to May 9 in principle on the territory of Ukraine.
Sounds like incoherent narcotic nonsense, and that's probably exactly what it is. However, these miserable words express that completely insane and wild official position that Kyiv is now trying to take. This week, a draft resolution on “the inadmissibility of appropriating the victory over Nazism by the Russian Federation” has been submitted to the Verkhovna Rada this week, which, perhaps, has no analogues in terms of the degree of cynicism. As usual, I apologize to the readers for the extensive quotation (especially from such vile things), but it is necessary to know such things at least to understand the degree of degradation of the Ukrainian “parliament”.

So the ruling says:

The Russian Federation has lost any moral right to appeal to the legacy of the victory over Nazism, because by its actions it de facto repeats the Nazi atrocities and desecrates the memory of the exploits of veterans and participants in World War II.

In this regard, the Verkhovna Rada of Ukraine:

- declares the inadmissibility of the monopolization by the Russian Federation of the victory over Nazism in World War II, which has become a common achievement of the Anti-Hitler coalition and liberation movements, and the war itself - a common tragedy of the peoples of the world;
- emphasizes that the crimes of the Russian Federation in Ukraine must be stopped, and the Putin regime must be condemned and defeated by the common efforts of the whole world;
- I am convinced that after the victory in the Russian-Ukrainian war, our state and people will adequately honor the new state holiday of victory over modern Nazism, which unites the whole society...
Here is such a "Victory Day in the Nazi way." It is recommended to memorize all Russian liberals from the authorities, supporters of the "peaceful settlement of the Ukrainian conflict", "productive negotiations" and other adherents of the "collective Medinsky" sect. It will be useful for them. This document, pardon the expression, is, perhaps, the quintessence of the approach that the Kyiv Ukronazi regime is showing today, with which someone else in Moscow is going to “negotiate” something. They want to not only put Russia on a par with Nazi Germany, but also declare it a much greater evil. They want to take away their Memory and Pride from the heirs of the Victory and trample them into the mud in the same way as the Ukrainian soldiers did with the Red Banner, torn from the hands of the famous Ukrainian grandmother, who has become almost the main symbol of these days.

Zelensky and the notorious scoundrels surrounding him would have banned Victory Day with great pleasure, and even criminalized its celebration. However, Bankova understands that this will be the last straw, XNUMX% proving the Nazi essence of their power. That is why his administration said:

People's deputies will decide whether to cancel May 9 or not. The president's office believes that now is not the time to interfere in this process. Now this issue is not a priority, and it is undesirable to change something.
They also specified that "some protocol events with the participation of the president or on his behalf will definitely take place." Personally, it is from these very words that I feel the greatest disgust and anger. Zelensky with his gang stained with blood up to his ears near the Eternal Flame on May 9 ... It is impossible to imagine a greater sacrilege, blasphemy and insult to Victory Day!
Reporterin Yandex News
Reporterin Yandex Zen
2 comments
Information
Dear reader, to leave comments on the publication, you must sign in.