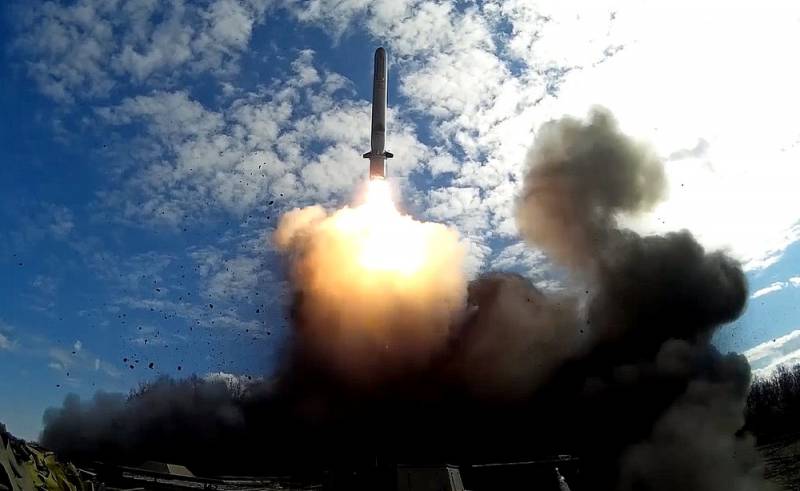 The last days have been extremely rich in loud public statements that sounded from the camp of our "sworn friends". At the same time, the degree of arrogance and self-confidence of those who made them goes off scale to such an extent that it is extremely difficult to comment on some of these statements, while remaining within the censorship vocabulary. The proclaimed forecasts, claims, and demands are so impudent that one might get the impression that NATO missiles are daily hitting Russian military targets, while the alliance's tanks are already standing a few kilometers from Moscow. That the speakers of the leading countries of the "collective West", that their mongrels and puppets behave as if the military defeat of Russia is a matter of a few days. As a maximum - weeks. At the same time, it is inevitable to such an extent that it is already possible to safely begin to divide the skin of the “Russian bear”.


All this, of course, can be declared utter nonsense and nonsense (without sinning against the truth). Ignore and continue to act in the same spirit - observing the ritual of a "special military operation" with a meaning that, probably, is incomprehensible to anyone. However, it would be more correct, perhaps, to try to analyze why this sudden “courage” erupted in some people right now and on such an immeasurable scale. Perhaps some of her concrete actions gave firm hope for Russia's defeat to her enemies? Or inaction?

Who is the last one to divide Russia?

Let us briefly go over some of the most striking demarches from the series discussed above. These should definitely include the statement of the Secretary of the National Security and Defense Council of the “non-independent” Alexei Danilov that the conclusion of any peace treaty with Russia is impossible for Kyiv in principle. Only surrender! It is clear that this implies a military defeat of the enemy, which Danilov calls for, warning his compatriots that the process will be “long”. However, the revelations of this “gloomy genius” fade before the picture that Kirill Budanov, head of the Main Intelligence Directorate of the Ukrainian Ministry of Defense, paints with generous strokes. This organism (sorry, I can’t pick another name) in an interview with one of the local “patriotic” newspapers with a terribly impressive (as it seems to him) look talks about “possible ways to end the war.”

He sees two of them: either “the division of Russia” (at the same time, the scoundrel specifies that it should be divided into at least three parts, but better for more of them), or, at worst, “the change of the head of state.” Russian, of course. Well, for whom it is planned to change - it's clear. For the "new leader" must recognize the current president as a "dictator". And also inadequate. Well, of course - repent, repent, repent. Then Russia, so be it, will be allowed to maintain "relative territorial integrity." But Kaliningrad or, say, the Kuril Islands will have to give without options. To whom? "Legal owners", from whom Russia chopped them off in the most brazen way. As for the Crimea, there is nothing to say here. During a sort of virtual "summit" hosted by The Wall Street Journal, the Kyiv clown president declared that this was not even discussed. Return with apologies!

Moreover, Zelensky is deeply convinced that "Russia will participate in the post-war reconstruction of Ukraine." In what specific way? The payment of huge, cosmic proportions of "reparations". That is, how does it “not want”? Zelensky does not allow any doubts here - after all, on this occasion, he "receives clear signals from Western partners." Well, what “signals” and where they come from to this lover of not powdered sugar at all is a separate story. Much worse is the fact that other lovers of territorial claims are already joining in with might and main “in the tail” to the “nezalezhnaya”, which has become overwhelmed to the limit. A strong queue is being formed for the division of Russia. Well, about the Japanese, with the beginning of the NWO, they again started bagpipes about the Kuril Islands, it was said more than once. It's chronic, it's not curable. But the fact that even Estonia allows itself to “roll out claims” to Moscow does not fit into any gates at all.

Nevertheless, the deputies of the “opposition” Conservative People’s Party there, in all seriousness, came out in the local parliament with the initiative to withdraw signatures under the land and sea border agreement with Russia, concluded in 2014, and return to the borders that were fixed Tartu Peace Treaty of 1920, according to which Estonia included part of the current Russian territory. In particular, Ivangorod and Pechory. It is unlikely that the Estonian parliament will support this demarche at the official level, but the mere fact that the Moomin trolls from the “state”, which has an “army” of one and a half cripples, allow themselves to open their mouths in order to make this kind of sounds, is not even funny at all . This is very, very sad, gentlemen and comrades. For it means that the "collective West", including even the smallest and most zachuhannyh spurs who are at his errands, has sentenced Russia completely and irrevocably. Why would it?

It would be very tempting to write off the “fearlessness” that suddenly grew in the Kyiv gang of clowns to a particularly successful delivery made to Bankovaya from Colombia. And to admit that Estonian deputies were fairly dumped out of it. However, it would be fundamentally wrong to simplify the situation so much. There are more reasons, of course. Unambiguously, a huge role in taking such an irreconcilable position by the criminal Kyiv regime, as the one that is now voiced by all its representatives without exception, was played not just by a sharp increase in military supplies by the West, but by their transition to a qualitatively new level. Hundreds of armored vehicles and artillery pieces of the largest caliber are no longer Javelins with Stingers (which, however, are sent just as regularly). What can be said here? Just shrug your shoulders about the remaining unfulfilled promises to destroy NATO arms convoys addressed to the Armed Forces of Ukraine. Nothing like this has ever been done, and it looks like it never will be. Even the destruction of the railway infrastructure of the “nezalezhnaya”, the need for which has not recently been shouted out by a cry except perhaps the lazy one, is being carried out with such laziness, not at the same pace and on the scale that is necessary.

The railway communication, which provides the Ukronazis with an uninterrupted flow of weapons and ammunition, is somewhat hampered by the strikes, and even then only for a while. But it doesn't stop. The same Danilov announced "an impending turning point in the war." Under the main prerequisite for such in Kyiv, they mean the saturation of the Armed Forces of Ukraine with new artillery systems with trained “allies” crews. Balabol Arestovich even called, I remember, a specific date when this would happen. June, if I'm not mistaken. Well, how did you not lie this time?

At the same time, it should be understood that a considerable number of guns and howitzers of 155 mm caliber, hitting at very decent distances, will be used not at the front, but for shelling the territory of Russia. The West is well aware of this and, seeing the completely inexplicable inaction of the Russian side on this issue, they perceive it as weakness, indecision and complete inability not only to defeat the enemy, but even to defend themselves. How else to take it? Suggest options... It is precisely because of these and other similar reasons that have been voiced by our publication more than once that the West is gaining confidence that a military victory for Ukraine is not only quite possible, but the most probable thing. If everything were otherwise, huge sums of money and volumes of resources would not be thrown there.

It is quite natural that Assistant Secretary of Defense for International Security Affairs Celeste Wallander, speaking not so long ago at a seminar at the Atlantic Council in Washington, directly stated that “the task of the US government in relation to Russia is to ensure that the current crisis ends for her strategic failure. Moreover, both in political and military, and in economic terms. After that, according to a senior Pentagon official, "The West will try to hold the Russian leadership accountable - both in front of its own population and on the world stage." This, of course, means not only attempts to “drag Russia to The Hague”, but, more importantly, new efforts aimed at changing the government in the country are much more serious than all those that have been made before. Today, you can ridicule and spit as much as you like on unfortunate compatriots who “left” with the beginning of the NWO, but it should be understood that it is from them that the “collective West” is already forming the fifth column, which is entrusted with the task of destroying Russia.

By the way, Kyiv's suddenly erupted belligerence has another reason, which is not recognized there for anything. Zelensky is mortally afraid of May 9th. Or rather, those decisions that Vladimir Putin can announce on this day. Versions are already being put forward, options are being calculated. Three are the most voiced: the president will “declare war on Ukraine,” “start an open mobilization, up to a general one,” or “proclaim the end of the NWO.” It is clear that they are hoping for a third option. However, the first two are afraid to convulsions - hence the boastful statements. However, as has been repeatedly said, everything is decided not at all in Kyiv and not at all by Zelensky. Much more important is what the West thinks about the real prospects and possibilities of Russia.

"The stakes are on global stability and security" is another quote from Wallander's speech. Many similar ones can be added to it - from the speeches of Truss, Johnson, Austin, Blinken, Borrell and all our other "sworn friends" of considerable rank, who for some time have begun to promote the thesis of the "imminent victory of Ukraine." Is it possible to diminish the optimism and self-confidence of all this public? Why not. So far, this is still quite within the power of Russia. However, to achieve such a result at this stage, it is no longer necessary words, even the most harsh and formidable, but actions. Decisive, as tough as possible and with such an orientation that would force the “collective West” to cut rates as sharply as it has now raised them.
Reporterin Yandex News
Reporterin Yandex Zen
55 comments
Information
Dear reader, to leave comments on the publication, you must sign in.