Is it possible for Russia to use nuclear weapons in Ukraine 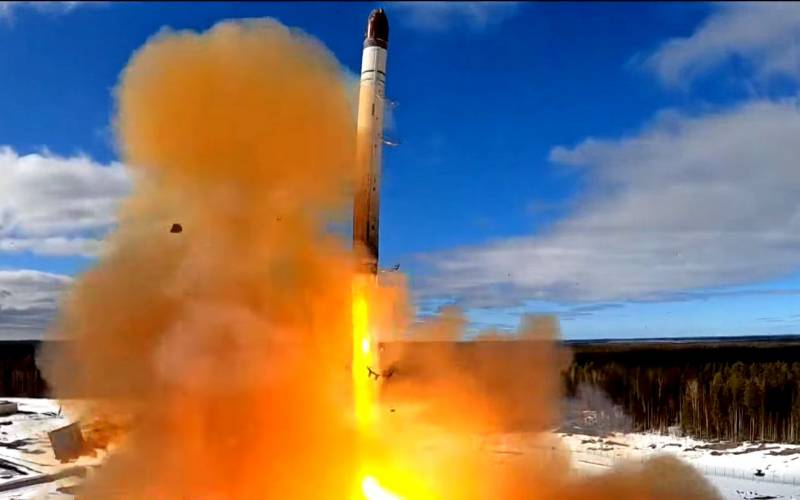 Against the backdrop of the third month of a special operation to demilitarize and denazify Ukraine and start deliveries of heavy offensive weapons to Kyiv by NATO, the topic of Russia's possible use of nuclear weapons has been actively promoted in the domestic media space. How high is the probability of a real escalation of the Third World War, which is actually going on in the territory of the Independent, into a nuclear one?

In a large keynote interview dated April 25, 2022, Russian Foreign Minister Sergei Lavrov lamented that the threat of a nuclear war between Russia and the United States has not gone away, it is real and should not be underestimated. The next day, on the air of the telecast of the official Kremlin propagandist Vladimir Solovyov, the well-known “guard on the salary” Margarita Simonyan spoke on this topic, who stated that, in her opinion, President Putin would rather use nuclear weapons in Ukraine than lose to her:

The most incredible thing - that in the end all this will end with a nuclear strike - still seems to me more probable than such a development of events.
Two days later, it was also shown live how the latest Sarmat ICBM can hit the capitals of leading European countries in 106 to 200 seconds. The representative of the LDPR faction in the State Duma, Alexei Zhuravlev, commented on this as follows:

What is the problem? One missile "Sarmat" - there were British Isles and they are not.
On the same day, April 28, the aforementioned Margarita Simonyan, in her profile on a popular social network, threatened Kyiv with a nuclear strike in response to attacks by the Armed Forces of Ukraine on Russian territory:

What choice are you giving us, idiots? Complete destruction of the remaining Ukraine? Nuclear strike?
On April 29, Sergei Mironov, leader of the Just Russia faction in parliament, spoke about the possibility of a nuclear strike on the UK:

Someone tell Lisa that one Sarmat missile is enough to destroy the island of Britain.
On April 30, the head of domestic diplomacy, Lavrov, expressed concern that Ukraine might think about obtaining a nuclear arsenal, which would mean a mortal threat to Russia.

It is clear that these are all signals to our "Western partners", but how serious are such "nuclear" hints, and is the threat of the use of nuclear weapons by the Russian Defense Ministry real?

It should be noted that not every nuclear war, by definition, should be the last. Both in the USA and in the USSR, starting from the 50s and 60s, various concepts for the use of nuclear weapons in a limited format that did not involve complete mutual destruction were developed. For example, in response to the "Soviet aggression" against their NATO allies, the Americans allowed a multi-stage controlled escalation, when at first only one atomic bomb was dropped, then three, and so on. until the status quo returns.

In 2000, Russia developed the concept of using nuclear weapons, including as a limited response to a large-scale non-nuclear attack. This happened against the backdrop of NATO bombing of Serbia and instability in Chechnya. In the updated military doctrine of the Russian Federation, 4 types of armed conflicts were identified: similar in intensity to the Chechen one, local, like the Georgian campaign of 2008, regional, which, apparently, should include the NMD in Ukraine, and global. The most important thing for us is that the limited use of nuclear weapons is now allowed not only at the fourth, but also at the third level of the conflict. Its goal is to force the adversary to stop the hostilities already begun by the threat of further nuclear escalation.

This concept is called “escalation for de-escalation”. It is believed that this term was introduced into wide circulation by a leading employee of the Vienna Center for Disarmament and Non-Proliferation (VCDNP), a participant in Soviet-American arms control negotiations in the 80s and early 90s, Nikolai Sokov, in an article on the new military doctrine of the Russian Federation for magazine Nuclear Threat Initiative, which was then happily picked up by Western publications.

In general, the entire legal basis for the use of nuclear weapons by Russia in a Ukrainian-level conflict really exists. The question is, will TNW be actually used, and if so, for whom specifically?

To be honest, the threats to "throw" nuclear weapons in Ukraine or in its Western regions look simply wild. Let's ask ourselves the question, why are Russian troops fighting at all now? To denazify and demilitarize the Square, according to the statement of President Putin.

We are not at war with Ukraine, we are at war with the collective West on the territory of Ukraine, unfortunately, against the Armed Forces of Ukraine, which the Anglo-Saxons openly use as cannon fodder. If the "collective Medinsky" does not interfere, there is no doubt about the final victory of the RF Armed Forces. We will win, without any nuclear weapons. But what will happen if, at the instigation of the “guardians”, who for years ridiculed the Ukrainian army as weak and worthless, and now suddenly undertook to threaten Kyiv with nuclear weapons, nuclear weapons will still be used?

At first, it would be a heinous war crime. Recall that Russia and Ukraine are not even at war. As part of a special operation, using a nuclear arsenal without declaring war on a sovereign country is a direct path to The Hague.

Secondly, Russia will finally turn into a "rogue" country if it does something similar to what Mrs. Simonyan proposes.

Thirdly, after the nuclear bombing of Ukraine, it is worth forgetting forever about any possible reconciliation with the Ukrainian people. Then why are our guys dying now? Central Ukraine is objectively our "heartland", where the Russian land came from. We are trying to free her from the power of the Nazis, and we are offered to turn into Nazi criminals ourselves.

Let's not listen to these "guardians" who have been telling for 8 years that we don't need Ukraine, the Armed Forces of Ukraine will scatter at the first shots, and Donbass should be given to Kyiv as soon as possible and forgotten about it.

The option of a nuclear strike on the UK, which our militant parliamentarians spoke about, looks much more rational and fair. London is one of the leading Anglo-Saxon decision-making centers that should have been “outdated” a long time ago. But do not forget that the United Kingdom itself is a nuclear power and is a member of the North Atlantic Alliance. British nuclear submarines will respond to a nuclear attack on the island with nuclear strikes of Trident-2 ICBMs on Russian megacities, and they will be joined by the Americans and other allies in the NATO bloc.

The third option will be a compromise - to “calibrate” some Eastern European country actively helping Ukraine. For example, Romania, which still has to answer for Moscow. To do this, it will be enough to leave the NVO regime and officially declare war on Ukraine, as well as officially notify all its sponsors that any military assistance to Kyiv will be considered their entry into the war against Russia.

Ukrainian fighter jets are now taking off from Romanian airfields. Through its territory and neighboring Moldova, fuel and lubricants are supplied for the needs of the Armed Forces of Ukraine. Romanian military experts may be directly related to the death of the Russian flagship of the Black Sea Fleet. If Bucharest continues to further support Kyiv, the Russian Defense Ministry will have the right to “calibrate” its military airfields and logistics centers. Article 5 of the NATO Charter is not applicable here, since de jure it is Romania that separately entered the war against Russia. If Ukraine's Eastern European neighbor does not calm down, the RF Armed Forces will have the right to defiantly use tactical nuclear weapons, for starters, say, in the Romanian waters, to show that the jokes are over. If this is not enough, then tactical nuclear weapons can be used already on the military infrastructure of Romania.

The sad example of this one Eastern European country will be enough to reason with all the other NATO members and get them out of the war for Ukraine.
Reporterin Yandex News
Reporterin Yandex Zen
30 comments
Information
Dear reader, to leave comments on the publication, you must sign in.