There is no choice: the defeat of Russia will return the world to the era of imperialism 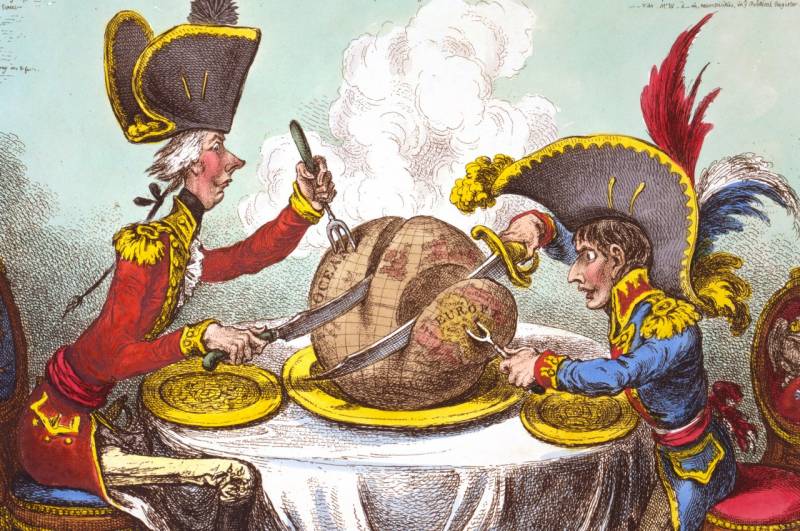 This text is categorically recommended for reading, first of all, for those who to this day continue to be in a blissful delusion about the fact that some “intermediate results” are acceptable in the CBO conducted on the territory of Ukraine. Some “preliminary victories”, having achieved which Russia will be able not only to rest on its laurels, but to “take a breath”, “gather up strength” for further struggle, and the like. Nothing like this will happen, even if someone in the Kremlin really wants it. The “collective West” in no way intends to provide such tempting opportunities either to the Russian army or to the country as a whole, which it is determined to erase. Yes, yes - and political maps of the world, and from history, and, of course, from geopolitics.


What we should be thankful for for our "sworn friends" is their increasingly frighteningly cynical candor. On the other side of the sight, they don’t even try to dodge, play up, pretend to be “partners” and make similar curtsies towards Moscow. Their time has passed. High-ranking representatives of the West, and, above all, its avant-garde, which is striving today to regain the status of the "elite" that reigns supreme in the world - the Anglo-Saxon world, "cut the truth-womb", not at all choosing expressions. In the case we are considering, the role of such a "mouthpiece" was not the last person in the UK - the head of the British Foreign Office, Liz Truss. The program of “rebuilding the world” announced by her, for the sake of which the flames of war in Ukraine are burning today, makes us think deeply. And a lot of things...

In truth, the head of the Foreign Office of Foggy Albion in the Russian (and not only) press was presented mainly as a mediocre imitator of Margaret Thatcher, frankly impersonating everything - from the iconic deeds of the "iron lady" like a memorable trip in a tank, to her outfits. Well, and after a few completely furious "blunders" publicly released by Truss in the field of history and geography (which is completely unforgivable for a career diplomat), her attitude towards her became exceptionally condescending and mocking. As it turned out, in vain. Perhaps (and even more likely) the Creator did not mark this lady with the seal of high intelligence, but at the same time, something else was measured out to her in full and even more than. Such excellent Russophobia, reaching some kind of zoological level, is rarely seen in the British "establishment". Well, and the speech with which she made at the Easter banquet at the Lord Mayor of the City of London (even if this speech was not written by her) indicates that the lady's ambitions are downright off the charts.

This speech by Truss, which we will analyze below, has already been compared no less than with the famous “Fulton speech” by Sir Winston Churchill, which launched the Cold War. It can be said that the words spoken at the London City Hall draw a line under both her years and under that rather short (by historical standards) period that came after the collapse of the USSR and lasted to the present. According to Truss, "structures economics and the security systems that were built after World War II and the Cold War allowed rather than deterred aggression, and their architecture, designed to guarantee peace and prosperity, failed in Ukraine.” Consequently, the time has come for new structures, a new “architecture” and, in general, a new world order. But is it really as new as Truss is trying to convince?

Of course, Russia and China are to blame for all the world disorganization that is happening now, which made a fatal mistake - according to Truss, they "turned out to be wrong in their assessments of liberalism, deciding that it was dead, and the West was in decline." They were completely wrong "in April 2022, when the free world united around Ukraine in its courageous struggle for freedom and self-determination." That is, the open support of the Nazi Kyiv regime in London is declared a "historical turning point" that rallied the "Western world" and gave its existence new meaning and purpose. Very symbolic. The times of the Great Patriotic War are indeed repeated, but, so to speak, in a corrected form for the Anglo-Saxons - now they do not have to, forcing their nature, “sit in the same trench” with the hated Russians. However, back to the fiery speech of Liz Truss.

While the Kremlin indulges in euphemisms, continuing to talk about a special military operation (and, unfortunately, act accordingly), the brisk lady calls a spade a spade, not at all embarrassed to admit that today there is an open armed clash in which not just military opponents, but all the countries of the West act as sworn, mortal enemies of Russia, having united:

The fate of Ukraine hangs in the balance, and Putin's victory will have dire consequences for the entire globe. This is the reason why we have already become active in Ukraine. The war in Ukraine is our war, it is the war of all, because the victory of Ukraine is a strategic imperative for all of us. Heavy weapons, aircraft, tanks - everything must be provided. That is why today we are diving so deeply into our reserves and increasing military production. We need to do it all and we will do it!
However, it's going to get even more exciting...

Colonialism 2.0? Yes, but much scarier.

During the course of the war, Russian troops must be completely expelled from the entire territory of Ukraine, including not only the entire Donbass, but also Crimea. The main thing in this is to deprive Vladimir Putin of the opportunity to declare his victory in Ukraine and use this war as a catalyst for establishing a new world order. If Putin succeeds, there will be untold suffering for the whole of Europe, and terrible consequences for the whole world. We will never feel safe again!
- this is, in fact, what London is leading to through the mouth of Liz Truss. For her, everything that is happening now in Ukraine is quite a Third World War, in which the enemy must be defeated at any cost, by any means and means. I hope no one has forgotten about the recent statements from Britain about the use of nuclear weapons "if something happens" without any consultation with NATO allies? Or allegations that Ukraine has every right to strike at any Russian territory? Will we continue to play CBO?!

However, why these rhetorical questions ... I suggest that you better get acquainted with the contours of that “beautiful new world” that the Anglo-Saxons intend to build after Russia suffers the most complete and crushing defeat in the “nezalezhnaya” (in which, by the way, they for some reason absolutely sure). So, "The UN and the GXNUMX can no longer function effectively." Why? Yes, for the simple reason that it is impossible "as long as Russia remains in these organizations." Banish! In the most determined and uncompromising way. And the next, presumably, China will be asked to “get out” from there. The list of "sins" of the Celestial Empire, announced by Truss, is very voluminous, and draws, if not on the "highest measure", then on the most serious punishments, which the West is already ready to apply to the fullest extent.

Beijing has not condemned Russian aggression or its war crimes. Russian exports to China grew by almost a third in the first quarter of this year ... The Chinese, together with the Russians, allow themselves to comment on who should or should not be a member of NATO. And they are rapidly building military forces capable of projecting power deep into areas of European strategic interest.
– lists Truss.

For this alone, in the opinion of the "collective West" and its herald, the Chinese comrades should be "taken to the nail." The most interesting thing is that in London they have no doubt that doing something like this would be literally a trifling matter! “Saying that the rise of China is inevitable, we are doing its job for Beijing. In fact, their rise is not at all predetermined. They will stop growing unless they play by the rules!” Truss directly threatens.

And in this passage the most important thing sounds: “rules”. In fact, the head of the Foreign Office proclaims the basic principles and contours of the neo-colonial policy under which its owners are determined to “bend” the whole world today:

Access to the global economy must be in direct proportion to playing by the rules. There will be no more free passes to it and cannot be. Today, thanks to the Russian-Ukrainian conflict, we show how this should be done. The Russian pass was canceled by us. Today we are hitting Moscow with all elements of economic policy!
If Beijing does not bow, does not kneel, it will face exactly the same future. Moreover, Truss bluntly stated that “the North Atlantic Alliance must become more global. This should be expressed, in particular, in solving the problems of protecting Taiwan from China.”

It must be said that the head of the British Foreign Office does not exchange for trifles. She categorically judges and immediately issues sentences that are clearly not subject to appeal. Her words are not only the quintessence of the neo-imperial, neo-colonial ambitions of London and Washington. This is, in fact, a complete rejection of the globalization games so dear to the liberal democrats. She theoretically assumed an entrance for any country eager to join Western "values" and "benefits" on the common market, and without any "passes" there. Now these liberties (if, God forbid, world history really follows the path outlined in Truss's speech) will be finished. Having played enough of liberalism and “global values”, the West intends to return to the good old days of empires in which the sun never set. To open division into sorts of people, nations, states. To some indisputable "rules" that will be written clearly by whom and where. And to cruel, inevitable reprisals against violators of such. Yes, in fact, with any "troublemakers". Mercy from the newly decided to take on the "burden of the white man" gentlemen will not be anyone.

One way or another, whether Russia wanted it or not, the Third World War began. And now there is simply no choice. Victory or death is about you and me. Here and now.
Reporterin Yandex News
Reporterin Yandex Zen
77 comments
Information
Dear reader, to leave comments on the publication, you must sign in.