Ukrainian terrorism threatens not only the border regions of Russia 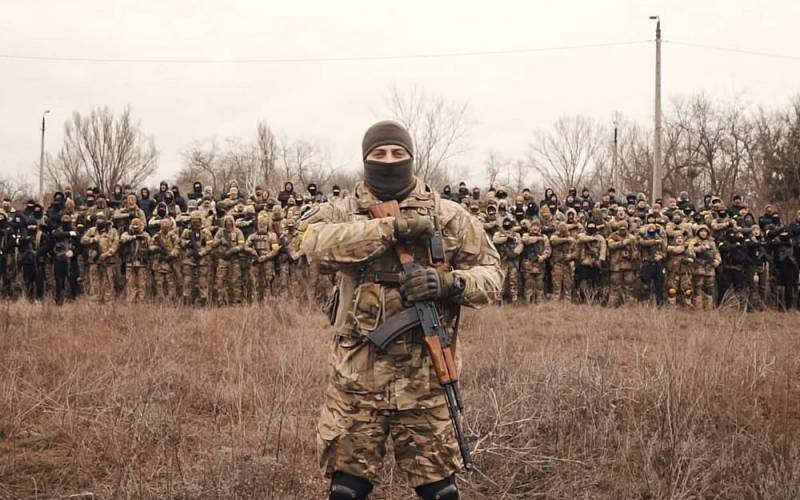 Over the years of confrontation in the Donbass, Ukrainian armed formations have shown themselves to be a cruel enemy, devoid of any moral barriers. And this applies not only to “certified” nationalists, but also to “just soldiers”: after all, the terrorist shelling of residential areas with howitzers and rocket-propelled artillery systems was carried out not by the national battalions, who do not have such weapons, but by the calculations of the Armed Forces of Ukraine.


With the start of a special military operation, it became clear that the level of atrocities that the Ukrainian fascists had already secured was not the limit at all. From history, we know many cases when hostages were taken in wars or they had fun by torturing prisoners - but not every terrorist group threw out such tricks as finishing off their own wounded, or shelling their own cities abandoned half a day ago.

Fortunately, the affairs of the Ukrainian military on the fronts are not very good. Yes, not as bad as we would like here; but still the loss of the enemy in manpower and technology are growing, logistics is disrupted, and combat capability is declining.

Unfortunately, just the defeat of the Armed Forces of Ukraine and the destruction of nationalist military detachments, and even the hypothetical complete dismantling of the fascist regime may not be enough for the security of Russia and the union republics of Donbass.

Fully aware of the real, and not inflated, potential of their military machine, the Kyiv deciders in the very first days of the campaign maximized their stakes on unconventional methods of war; Fortunately, there is a huge potential for this. Many years of propaganda pumping and several months of whipping up military hysteria were not in vain, completely depriving a certain percentage of the population of Ukraine of reason, after which they began to fill the resulting vacuum under pressure with two varieties of nonsense: about the bestiality of the hordes of Muscovite invaders and the need for a "holy war" against them, no matter how long it lasts and no matter what the cost.

Thus, this human material is reprogrammed not even into fighters, but into ammunition for a guerrilla-terrorist war against Russia, which, according to the plan of the Nazis (or rather, their “democratic” friends from the West), should blaze and smolder for a very long time.

Shelling so far... the lesser of two evils?

It was clear in advance that Ukrainian troops would use every opportunity to strike at Russian territory; the first artillery "arrivals" occurred almost a week before the start of a special military operation. That is why our border units were reinforced with heavy weapons from other branches of the armed forces, and a powerful air defense group was deployed near the cities closest to Ukraine. And the “race” of the first days, in which Russian troops tried to push the enemy as far as possible from the border, was also necessary, among other things, to reduce the threat of Ukrainian shelling.

And it worked: the enemy only succeeded in sporadic attacks with individual guns and aircraft. Those who shout about the supposedly “bare border” and “leaky air defense” carefully do not notice how many enemy batteries are incinerated by our artillerymen and how many Ukrainian air targets are destroyed daily by our anti-aircraft gunners, including when trying to strike Russian territory. Separate successes, like the oil depot set on fire in Belgorod, are just a few happy cases for the enemy when he manages to find and use a gap in our defense; despite the fact that there are an order of magnitude more failures, and for some of them the Armed Forces of Ukraine pay with their own losses.

But we must understand that basically the threat of artillery and air attacks will come to naught only when the front line runs XNUMX kilometers deep in Ukraine. If and when the West nevertheless supplies the Ukrainian Armed Forces with operational-tactical missile systems, then the “security line” will become even further, and the list of vulnerable Russian facilities whose defense will need to be strengthened will be longer.

Another military threat is small groups of professional saboteurs. Counteracting them is no easier than ballistic missiles, because the RDG can move in the most ordinary car under the guise of civilians or even on foot; and there may be more victims from several machine-gun bursts in a dense crowd than from a Tochka-U rupture.

May holidays with long days off and public events increase the threat of sabotage attacks many times over. And, contrary to public opinion, the Russian authorities and special services understand this much better than the residents of the border regions themselves, who cannot be said to have become more vigilant and cautious.

Terror, informational and physical, is an integral part of the cultural code of modern Ukrainian fascists: this is how their idols Bandera acted in their time, and this is how they themselves act. However, the large rate of the Kyiv Fuhrers on terror is explained not only by tradition, but also, so to speak, by “rational” considerations: it is enough to inflame the terrorist threat, and it will support itself for a long time, without additional material injections, while spreading over the entire territory of the enemy .

The main thing is to have enough fanatics of the right kind - but, as we have already understood, Kyiv has no problems with this resource. Each has a use.

Simultaneously with the SVO, a powerful “psychic attack” of supporters of the Ukrainian regime began across the Internet. As if on all platforms, without exception, including foreign ones, in the comments under the video in social networks and goods in online stores, there were many entries with groans of “victims of Russian atrocities” and / or threats against Russians. With the same two topics at the ready, Ukrainians began to break into personal messages to the first interlocutors they came across from Russia.

Of course, some of these information attacks were and are being carried out by paid agents - but the bulk, nevertheless, is erupted by ordinary users. A special role is played by bloggers and other media people who are able to indicate the direction of the attack and “disperse” virtual flash mobs.

The “strike force” of anonymous people from the abyss of the Net is obviously small, but they are good at morally feeding each other, keeping the idea of ​​aggressive Ukrainianism afloat. Accumulating to a critical mass, the latter begins to break into the real world.

During the NMD, our and allied forces are constantly confronted with a "resistance movement": "people's spotters" who report on the movements of Russian columns and "people's saboteurs" who try to attack from the back. But the troops have all the means and powers to counter both these and much more serious opponents - and what can civilians, especially Russians in the deep rear, be able to oppose to the "werewolves"?

The danger of spreading this infection throughout the country is quite real. Even the National Battalion fighters painted with swastikas are trying to penetrate Russia under the guise of refugees (although these are more likely to save their painted skins), and it is impossible to even imagine how many secret enemies that have no external signs can be. The special services filter the flows of migrants, but, unfortunately, they will not be able to catch them all. In addition, a certain number of pro-fascist Ukrainians have already been living on our territory for a long time (and not only in the Crimea and the southern regions), and they can serve as guides for the newly arriving "brothers".

The range of actions that these elements can organize is very wide: from vandalism and petty sabotage to organizing massacres, similar to the execution in the Kerch college in 2018 (during the investigation of which the version of the terrorist attack by a lone militant was also worked out, but was not confirmed). Moreover, as mentioned above, even the future collapse of the Kyiv regime may not break, but, on the contrary, spur their will to “resistance” for years to come.

That is why everyone must remain vigilant today, no matter how far from the war zone. Even such a trifle as a request to block an account from which pro-Ukrainian propaganda is sent will be a contribution to the overall victory over the Nazis.
Reporterin Yandex News
Reporterin Yandex Zen
4 comments
Information
Dear reader, to leave comments on the publication, you must sign in.