The Russian army needs to cut Ukraine in two, destroying bridges across the Dnieper 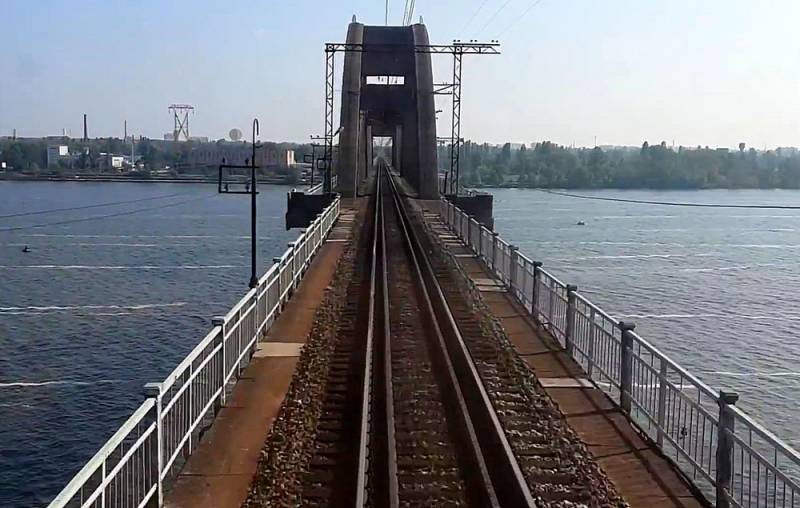 The special military operation to demilitarize and denazify Ukraine has been going on for three months now. In the Donbass, the offensive of Russian troops is gradually developing, seeking to take the Ukrainian group into the “cauldron”. The Armed Forces of the Russian Federation are working in detail and without dangerous haste, trying to avoid unnecessary casualties. Such an approach will inevitably give results, but there is a “bottleneck” in this regard. The Armed Forces of Ukraine, dug in on the Left Bank, still have a supply channel with the Right Bank, from where they receive new armored vehicles, ammunition, and fuel with fuel and lubricants. So why do all the railway bridges across the Dnieper remain safe and sound, allowing you to continuously feed the Donbass grouping of the Ukrainian army?


For the third month now, this question has been asked by both independent military experts and ordinary people who are friends with common sense. How was it possible to enter the territory of a country the size of France, which has at least twice the number of Russian forces involved in the NMD, as well as the Territorial Defense, make long forced marches without reliably clearing their own rear, and carefully store the road and transport infrastructure of the Independent ? The last point is especially annoying.

During the demilitarization of Ukraine, the General Staff of the Armed Forces of the Russian Federation relied on the destruction of the military infrastructure of the Armed Forces of Ukraine, military units, air defense systems, warehouses with ammunition, fuel and fuels and lubricants, aviation and armored vehicles. Indeed, at first it was possible to achieve great success in this. However, after the fake "massacre in Bucha", the countries of the NATO bloc, as well as other US allies, decided to start supplying Kyiv with heavy weapons for the war with Russia. In the UK, they have already agreed that the Armed Forces of Ukraine will now be able to hit targets deep in the territory of Russia itself. A rather unexpected result of "small and victorious." Echelons with armored vehicles, artillery systems, MLRS, air defense systems are going to Ukraine, OTRK is expected, allowing strikes at a distance of up to 300 kilometers. Promised fighters of the Soviet and, possibly, American and Swedish production, attack helicopters. There are trains with fuel and lubricants for the Ukrainian army.

And all this deadly iron comes first to Western Ukraine through neighboring Poland, and also through Moldova. Part of these military cargoes settles on the Right Bank, the rest goes to the Left Bank, into the hands of the Armed Forces of Ukraine in the Donbass. It turns out that the task of demilitarizing Ukraine has objectively failed. The Armed Forces of the Russian Federation are diligently tracking down and destroying warehouses where foreign technique and fuel, but it is impossible to destroy everything, and the flow does not dry up. And now what i can do?

This problem with a pool continuously filling with water, which they are trying to scoop out at the same time, has two solutions - the correct one and the other. Consider how each of them will be effective.

The correct solution is to turn off the tap that fills the pool, more precisely, the border of Ukraine with Poland, Hungary, Slovakia, Romania and Moldova. But this requires a large-scale operation on the territory of Western Ukraine. The events in the North and South-East of Nezalezhnaya have clearly demonstrated that the ground forces of the RF Armed Forces involved in the NMD are clearly insufficient for simultaneous operations in all directions. This means that within the framework of the special operation in Western Ukraine, we will be able to focus only after solving the problems on the Left Bank, as well as in the South of Ukraine.

There is another option, about which we they said previously. It will be enough to move from the NWO format to a full-fledged war with its official announcement to Kyiv and a warning to all Eastern European countries that any of their military assistance to Ukraine will be considered entry into the war against the Russian Federation. The scheme is quite working, realistic, but for its implementation it is necessary to have only political will.

The last of the acceptable options for how to cut off supplies for the needs of the Armed Forces of Ukraine from the NATO bloc is to start systematically destroying the road transport infrastructure in Western Ukraine: bridges, roads, stations where trains “change shoes”, etc. However, something very strange is actually happening. The south-east of Ukraine, historical Novorossia, where a lot of pro-Russian citizens live, has become the scene of a merciless battle with Ukrainian Nazism, with all the ensuing consequences for cities, roads and bridges. In Western Ukraine, where Bandera's ideology came from, now it's quiet and smooth. Separate targeted missile attacks on warehouses and military units cannot be compared with what residents of traditionally pro-Russian regions experience.

Amazing injustice. Why the Russophobic Westerners and their peace are so cherished is not clear.

Instead of fighting the root cause, for some reason we decided to heroically fight only with the effect. Russian Foreign Minister Sergei Lavrov in an interview stated verbatim the following:

We have made it clear that any cargo that enters Ukrainian territory that we consider to be carrying weapons will be a legitimate target. <...> We are conducting an operation, the purpose of which is to eliminate any threat against Russia that comes from Ukrainian territory.
The bulk of military cargo is delivered via the railway network, some, like fuel trucks, via roads. Many news observers sincerely wondered why Russian aviation, which dominates the air, does not bomb trains with armored vehicles on the way. The reason is simple and disgusting in its essence: the Ukrainian Nazis connect wagons with military cargo to trains with passenger cars. If a train derails as a result of an air or missile attack, this will lead to massive civilian deaths, and Russia will be blamed for this war crime.

Nazis - they are both German and Ukrainian.

All that remains are strikes against Ukraine's railway network itself. The railroad tracks are really very easy to damage with simple air bombs. It will also be quite easy to restore it later by stopping the movement, but it will take some time. Therefore, regular air strikes with cheap free-falling bombs make sense, but for some reason this does not happen.

Instead, in the past few days, targeted strikes in Ukraine have destroyed the traction stations that supply power to electric locomotives. This will indeed significantly complicate the transfer of weapons by rail, since most of it in Nezalezhnaya is electrified. However, this will not completely solve the problem, since Kyiv still has a significant number of diesel-powered trains.

The bottom line is that within the framework of the NMD format, it is possible to reliably stop the supply of the Ukrainian group on the left bank of the Dnieper only by destroying the railway bridges across this great river. This will allow dividing Ukraine into two of its historical parts - the Left Bank and the Right Bank, as well as splitting the Armed Forces of Ukraine in two, depriving them of supplies and breaking them up separately. This is extremely important, since the Ukrainian army significantly outnumbers the Russian contingent involved in the NMD. However, all the bridges across the Dnieper for the third month of the special operation remain safe and sound. This is explained by the alleged concern for the civilian population, who had to have time to escape to the Right Bank, and also by the fact that it will be expensive for us to restore the bridges later.

Arguments of criticism do not stand up: whoever needs it has already left, and the Dnieper bridges will be our problem only if the Left Bank is accepted into the Russian Federation or recognized as people's republics independent of Kyiv. In the meantime, the Kremlin is stubbornly denying the occupation of Ukraine. If they accept the South-East of the former Square as part of the Russian Federation, then the Rotenberg brothers will gladly repair the bridges. There is experience. By the way, it is absolutely unnecessary to destroy bridges across the Dnieper right to the ground. It will be quite enough to break some span on each of them, forcing them to put it on a long repair.

If the Kremlin continues to be silly with Kyiv, we will wait for the OTRK strike on the Crimean bridge, which will be delivered by the Armed Forces of Ukraine from Western Ukraine across the Dnieper.
Reporterin Yandex News
Reporterin Yandex Zen
33 comments
Information
Dear reader, to leave comments on the publication, you must sign in.