Why the issue of liberated territories in Ukraine is critically important 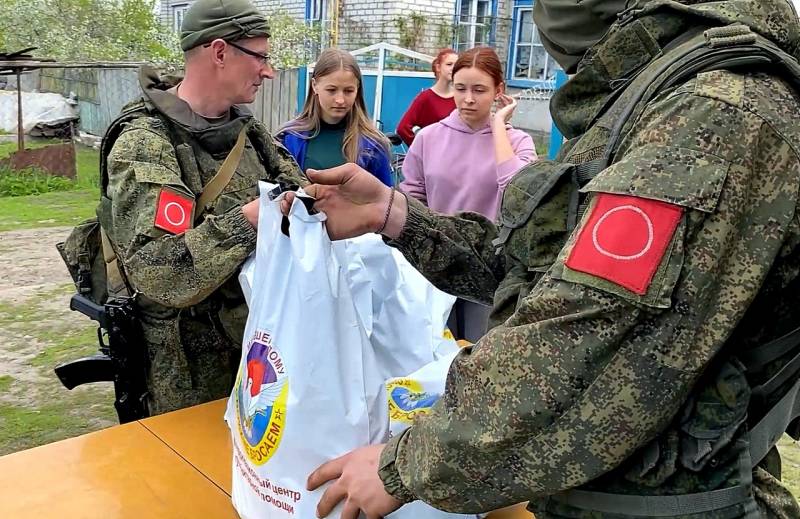 One of the popular News in the Russian media space on April 28 there was a statement made by the new mayor of the liberated Kherson, Alexander Kobts, that “Kherson region will never return to Nazi Ukraine with its ugly policiesaimed at destroying people." Sounds wonderful. Very uplifting. But only if you do not ask the question: where, in fact, does the region cleared by the Russian army from the Uronazis intend to go after the end of the special military operation? The option of "occupation" of such regions is resolutely rejected time after time in the Kremlin. Now, the talks about holding a referendum there on the creation of the KhNR by Moscow, which are now being strongly exaggerated by Kyiv, are also refuted. What then?


However, even if a "people's republic" is created, what will be its fate? Provided that the state formation with the name "Ukraine" is preserved in any limits and the Russian troops withdraw at least beyond the borders of the Donetsk and Lugansk regions, it seems extremely unenviable. Which one - you can ask the residents of the same LPR and DPR. But the second stage of the CBO is just beginning! And ahead, if you believe the official and semi-official statements of very responsible persons (including those with large shoulder straps), is the liberation of new lands, settlements, and regional centers. Today, their future, even if you completely forget about the vicissitudes of non-peaceful times, is practically hanging in the air. And only those in whom naivety turns into a slightly different quality can treat this issue with completely inappropriate optimism or, excuse me, indifference when considering it. Erroneous decisions in this direction can put to dust all the achievements and successes achieved on the fronts of the Northern Military District.

Security has a recipe

Making such a categorical conclusion, I am primarily based on the words of Russian President Vladimir Putin, who repeats over and over again that the main goal of the special operation launched on February 24 is to ensure the security of Russia and its people. I don’t know what, sorry, where those “lights of reason” listen to his words, who propose to “include in Russia” (“cleanse from the Nazis”, “take control” - underline as necessary) exclusively the South and East of present-day Ukraine, and the rest send them to hell - "and let them figure it out themselves." I wonder how many more attacks on the border regions of Russia, terrorist attacks and (as practice shows) not unfounded statements by Kyiv about the further expansion of hostilities "into enemy territory" are needed in order for the obvious to reach everyone. A state formation the size of even one region, over which a yellow-blue rag will flutter, will remain an eternal and unchanging source of danger and threats for Russia.

However, more sensible thoughts still sound more often: “federalize” the current “non-independence”, divide it into several “neutral” states, tightly driven into the geopolitical orbit of Moscow, and the like. Perfectly! Now this is much more like a realistic plan to create the very “safety zone” for which (according to big leaders) everything was started. However, with all this, the question of what exactly will be the price that Russia will have to pay for it remains open. First of all, in money, material resources and human lives. The fact that ahead, right up to the very Polish border, is not a friendly territory at all, where it will not be enough to replace flags and signs and reappoint officials, it seems, is already clear to everyone. But where are the conclusions from this fact?

The fact that Russia, which brought liberation from the Nazi regime to the lands of the former Ukraine, does not understand very well how to deal with them further, it has already become quite obvious to everyone. Alas, for Kyiv, which is trying to prolong its agony, in the first place. And that's where they know exactly what they want. "Return the occupied territories" and arrange a bloody terror on them against everyone who dared to cooperate with the liberators at least in some way. By the way, Kobtz's speech was also heard there quite distinctly. And they reacted to it by initiating a criminal case under the article “Treason”. 10 years in prison. I must say that the Zelensky regime, with the help of a pocket "parliament", has lately adopted a whole package of legislative acts, according to which any cooperation with the Russian liberation troops or the military-civilian administrations created by them entails extremely unpleasant consequences, recorded in the Criminal Code Ukraine. And do you know what the main incident and paradox is? And the fact that de jure on the territory of the Kherson region to this day the laws of Ukraine are in force. After all, nothing else has been officially announced by anyone. Or not? And this is just one of the conflicts caused by the fact that the creation of new subjects of statehood where the Ukronazi evil spirits were expelled from has been left to chance or “paused”.

At best, this creates a kind of vacuum, creates a “gray zone” in which people who fall into it are forced to exist. At worst, it leads to situations where “Ukrainian patriots” (like those who over and over again arrange provocative demarches in the same Kherson), who are unambiguously hostile to Russia, behave confidently and brazenly. And those who are ready to support her are in complete confusion and bewilderment. Statements by local leaders like Kobtz or Saldo are wonderful. But, no offense to them, be it said, the fate of the liberated regions will be decided at several other levels.

Should have started yesterday

And it is precisely at these very levels that those who should shed light on the future of millions of people continue to keep deathly silence today. Those who have already been released. Those who expect this liberation with gradually fading hope. And, by the way, those who are mortally afraid of him. Yes, yes, yes - it would not be out of place for Ukrainian “patriots” to be told that their hopes that everything will “return to normal” (if not now, then later) are vain and unrealizable. Rush for the cordon? All the better! "Stand in line"? But this is a very controversial issue. Believe me, just a clear explanation that the state of Ukraine will not exist after the end of the NMD in any form, borders and forms, can serve as a strong incentive for many to evade conscription or surrender. First of all, for those who rushed into the ranks of the Armed Forces of Ukraine, encouraged by the victorious reports of dill propaganda in the hope of future "nishtyaks" that Zelensky's regime so generously promises "zahysnyks" today. Apartments, huge cash payments, benefits and privileges. "Heroes of the ATO" tasted all this in full over the past eight years. Gullible fools today are eager to repeat their "success", only, so to speak, in an improved and accelerated version. Do you think there aren't many? You just don't know Ukrainians... Tens of thousands.

But, if they are clearly made to understand that they will not wait for any promised "buns", even having survived on the battlefield, due to the departure into oblivion of those who gave out promises, the enthusiasm of these "warriors" will significantly decrease. Yes, they will remain motivated, completely “beaten off”, smeared in blood. But the percentage of deserters, believe me, will be rather big - especially if all this is accompanied by regular “boilers” at the front with their corresponding information coverage. Well, if people are also promised real material benefits - at least in the form of forgiveness of debts on a communal apartment, which in many Ukrainian families have already grown to tens, or even hundreds of thousands of hryvnias, the process of the collapse of the Armed Forces of Ukraine will go even more fun.

Let me note that another (if not the main) mistake in restoring order in the liberated territories is the absence of a certain center, an organ that embodies the hypothetical “new Ukraine” (Little Russia or something else, it doesn’t matter now). Some kind of "Committee of Salvation", or "Council of Liberation", or "Anti-Fascist People's Front" from those recognizable in Ukraine, who use there (among the sane part of the population) a certain authority, should not be created today. And not even yesterday! It was supposed to be formed before February 24 and on that day to make the first appeal to compatriots! I guess about the reasons why this was not done, and I will keep silent about them. But it's not too late now! And this is not at all about the “new government” or the “occupation administration”, which are babbled about in Kyiv, putting forward versions one more ridiculous than the other.

This should be precisely a transitional body for the period of the military special operation. Those who will take the country from the liberators and hand it over to the new government. It is not at all a fact that they will want to join it. The main thing is that a real, visible and legitimate alternative to the Kyiv regime should already appear in the eyes of both Russia and the pro-Russian part of the population of the territories held by the Ukronazis. People who are clearly and accessible to every inhabitant of this unfortunate land will be able to draw some specific prospects for its future existence, give citizens hope, some guidance and understanding of the meaning and essence of what is happening. At a minimum, outline the main contours and voice possible options. This is not to mention the fact that with the help of these people, work should begin as soon as possible, at least on the outlines of the new legislation and state structure, under which the country cleansed of the Nazis will have to live.

If nothing like this is done, the liberated territories, which at the moment are primarily the rear of the Russian army, are waiting for "confusion and vacillation", chaos and the "creeping" return of the Ukronazis. First - in the form of "activists" who arrange provocations, then - in the form of sabotage and terrorist groups, and then - in more serious volumes. Believe me, this rabble has something to lose and they do not intend to give up “their own”. Of course, such encroachments can be stopped by the forces of military units and the National Guard. But why separate these forces from the offensive, from the operation to defeat the Kyiv regime militarily, if everything can be built much more rationally? The only way to really prevent the revival of the Evil that Russian soldiers are smashing face to face on the front lines today is by creating a completely new country in their rear, capable of supporting their liberators, and not stab them in the back.
Reporterin Yandex News
Reporterin Yandex Zen
8 comments
Information
Dear reader, to leave comments on the publication, you must sign in.