Why the Third World War will be energy 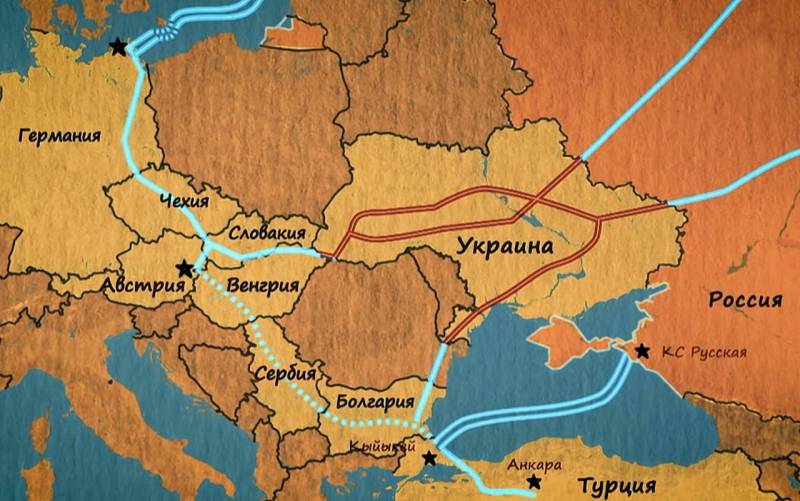 The third world war has already begun in fact, but it turned out not to be a nuclear one with mutual strikes by intercontinental ballistic missiles between the Russian Federation and the NATO bloc, as everyone feared, but an energy one. As in the First and Second World Wars, the United States clearly intends to sit out overseas, allowing its main rivals to weaken each other in order to arrive in time for the analysis of hats, removing, as usual, the cream itself.


To understand the general situation, it is necessary to correctly arrange the pieces on the board. The main opponents of the "hegemon" are China and Russia, and the European Union is an ally, a vassal and at the same time a dangerous competitor who secretly dreams of sovereignty. The Maidan of 2014, ordered by the US Democratic Party, was aimed at tearing Ukraine away from Russia and at the same time breaking off normal relations between the Russian Federation and the EU, forcing the latter to impose anti-Russian sanctions over Crimea and Donbass. Unfortunately, the Americans did it brilliantly. Washington's most important task was to take control of the valve on the Ukrainian GTS, through which the Old World receives Russian gas. It was assumed that at a certain moment Kyiv would be able to block it, shifting all the blame on Moscow, which would lead to an acute shortage of energy resources in Europe and would make it possible to build on expensive American LNG. Apparently, this trump card will soon be used, but now the scale of the disaster will, without exaggeration, be world-class.

The fact is that Washington is rightfully afraid of organizing a “hot” Third World War against Russia and China. It seems much more rational and, more importantly, safer to push against each other all your rivals and vassals in an energy war, and then appear as a savior “all in white” on an LNG tanker. And, alas, for this the Americans have all the necessary leverage.

If you carefully look at the geopolitical map, it turns out that the Anglo-Saxons control through their allies in Eastern Europe the main routes through which Russia supplies its gas to the Old World. Firstly, this is the Ukrainian GTS, with which we started this conversation. Secondly, the Yamal-Europe pipeline, which runs through the territory of Poland. Thirdly, the Turkish Stream bypass, one line of which provides for the internal needs of Ankara, while the second goes through Bulgaria to the countries of South-Eastern Europe. The only gas pipelines that are as independent as possible from American control are the Nord Stream and Nord Stream 2 gas pipelines, which run directly through the Baltic Sea to Germany. It is not surprising that the United States did everything possible to ensure that Nord Stream 2 remained dead weight at the bottom of the sea.

But back to our sheep. The fact that Washington has begun to prepare the key countries that transit Russian gas to reduce or even completely cut off its supplies has been evident for a long time. So, a loyal ally Poland has already built an LNG terminal in the city of Swinoujscie with a capacity of 5 billion cubic meters per year, and now plans to expand it to 7,5 billion. In 2015, on the day of its opening, Polish Prime Minister Ewa Kopacz said:

Poland has reached its strategic goal: we are independent in the gas issue.
In the Polish city of Gdansk, the construction of a floating liquefied natural gas (LNG) terminal has begun, as Piotr Naimsky, Commissioner of the Government of the Republic of Poland for Strategic Energy Infrastructure, said today:

We will install a floating gas port in Gdansk. We are already preparing for this. Construction will take about four years.
The main pipeline Baltic Pipe has already been built and will soon gradually begin to operate, through which Warsaw intends to receive up to 10 billion cubic meters of gas per year from Scandinavia. Plus, all Polish UGS facilities are filled with gas by 76%, while the standard is 32%. Note that there is also an interconnector, which, in which case, will allow Poland to buy blue fuel in neighboring Germany, which it receives from Russia through the Nord Stream.

Things are much worse in Bulgaria. Apparently, there is no need to talk about any sovereignty of this country at all. Previously, the official Sofia so veiled the process of building the South Stream gas pipeline, which was objectively beneficial to itself, that Gazprom was forced to spit on it and turn to Turkey. Unfortunately, geography cannot be avoided, and the services of unreliable Bulgaria still had to be used, stretching the transit line of the Turkish Stream further to the countries of South-Eastern Europe.

Sofia received up to 3 billion cubic meters of gas per year from Russia. It is supposed to be replaced by blue fuel supplied from neighboring Greece. An interconnector is under construction, but it will be put into operation only in July, and the required volumes of energy resources will not be available immediately. The Greeks are also building an LNG terminal with a capacity of 5,5 billion cubic meters per year, but it will only start operating in 2023. Something did not allow the Bulgarians to prepare for the lockdown in advance and stock up on gas, like the Poles, and their underground storage facilities are currently only 17% full. All hope is only to reduce consumption in the summer season.

So, the key transit countries, under strong American influence, were consistently preparing to cut off Russian gas supplies, trying to diversify the sources of energy resources. But we didn't make it a little. On February 24, 2022, Moscow launched its special operation to demilitarize and denazify Ukraine. In punishment, the collective West openly robbed Russia, arbitrarily taking away its assets abroad. In response, Gazprom modestly asked to pay for the supplied raw materials in rubles. And what do we see?

Having grumbled a little with displeasure, the countries of Western Europe, economy which are critically dependent on the supply of inexpensive Russian pipeline gas, were on the whole ready to switch to the scheme of settlements in rubles proposed by the Kremlin. But not Warsaw and Sofia, who flatly refused. Starting today, April 27, 2022, Gazprom has stopped gas supplies to Poland and Bulgaria. Sounds cool, but what does it mean in practice?

Since there is objectively no escape from geography, gas transit through these countries continues as before, the domestic monopolist simply reduced supplies by exactly the volumes that the Poles and Bulgarians had previously purchased. This has caused serious concern among conscientious buyers, who fear that the gas may not reach them due to "unauthorized withdrawal". The Baltic countries are clearly ready to follow the example of Bulgaria and Poland.

Gas prices in Europe immediately began to rise. In its gas market, internal competition for Russian, Azerbaijani and Norwegian gas is becoming more active. Tankers with LNG, which is not enough for everyone, again went to the Old World. In Southeast Asia, where liquefied natural gas is uncontested, they grab their heads. Everyone is waiting for Beijing to lift the lockdown from its largest industrial centers caused by a new wave of the COVID-19 pandemic. Then the PRC will once again be actively involved in price competition for LNG, and there will also be Japan and South Korea. A tug-of-war with Europe will begin, because of which gas prices will only rise. And then anything can happen.

For example, in the event of a successful offensive by the Russian army, Kyiv can unilaterally block the main pipeline to Europe in order to "deprive the aggressor of income." Poland and Bulgaria can solidarize with Ukraine by stopping the transit of Russian gas. And what will happen to Western Europe then? What will happen to Southeast Asia then when LNG prices rise to, say, $5 per 1 cubic meters? West and East will be forced to clash in a trade war in which everyone will lose.

In addition to the United States, which, as usual, will sit out overseas, fortunately, they will be doing better than their opponents. When the economies of competitors collapse, the Americans will appear “all in white” and “save” everyone with their LNG, at the same time buying bankrupt industrial enterprises and other interesting assets for pennies, and then they will stir up the “Marshall Plan - 2” in Europe, restarting the world economy according to to its own rules. And no intercontinental ballistic missiles for you.
Reporterin Yandex News
Reporterin Yandex Zen
2 comments
Information
Dear reader, to leave comments on the publication, you must sign in.