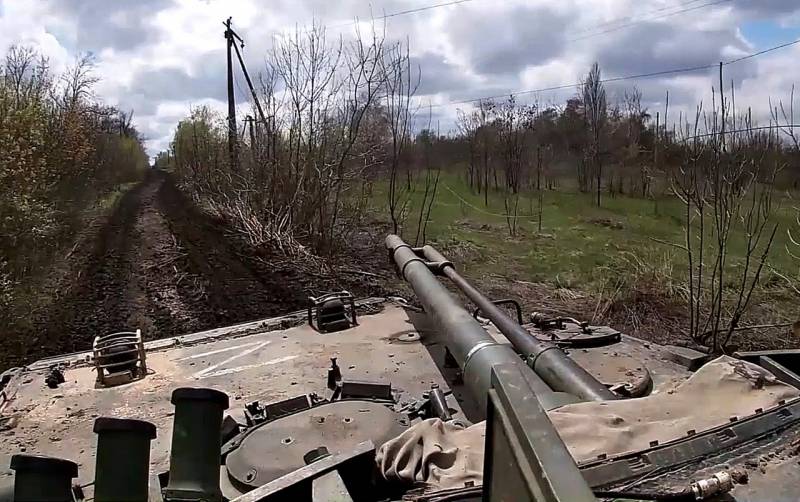 In the course of a special military operation for the denazification and demilitarization of Ukraine, either an operational pause continues, or a “set of dispersal” by the liberation army for a subsequent crushing blow against the forces of the Kyiv regime. Therefore, I would like to focus our readers' attention on issues that are more related not to the actions of the Armed Forces, but to much more global aspects of the NMD. They have been mentioned and written about more than once (including on our resource, and by me personally), but nevertheless ... Unfortunately, about 90% of them are at the well-known stage “but things are still there” .


At the risk of uttering a deliberate banality and elementary truth, nevertheless let me remind you: there are no trifles in war. And we are not going to talk about trifles. Moreover, the problems that I would like to recall are well known and quite obvious. Perhaps, they do not seem particularly relevant to someone “at the top”, which is why their decision is postponed until later, until some completely unimaginable “better times”. Perhaps I (and not me alone) from my level simply cannot see the fullness of the true intention and appreciate the scope and depth of the plans being implemented. Nevertheless, I will allow myself to express my opinion and ask questions. At least due to the fact that the success or failure of the mission to liberate Ukraine is for me and my loved ones a matter of life and death, not at all in a figurative sense.

"Decision centers" are waiting for strikes

The first and perhaps the most global problem is the increasingly clear discrepancy between the “last warnings” declared by Moscow and its real actions. Impunity breeds relapse - this is an axiom. However, both the Kyiv regime and its Western patrons are becoming more and more convinced with each new week, almost every day of hostilities: that very “maximally tough response” that Russia promised (and which they expected with horror from it) will not follow. to any of their actions. Including the most provocative demarches and the meanest blows. Including, alas, on Russian territory. I will not try to catch the words of the highly respected representatives of the General Staff and the Ministry of Defense of Russia, recalling exactly how many "last Chinese warnings" they made to Kyiv.

It will be enough that what was said on April 13 regarding “attacks on decision-making centers, including Kyiv”, which will be inflicted if “attempts of sabotage and strikes by Ukrainian troops on objects on the territory of Russia” do not stop. Stopped? Yes, nothing of the sort. On the contrary, attacks are becoming more frequent and more damaging. Moreover, just the day before, on April 27, adviser to the head of the presidential office Mikhail Podolyak allowed himself the following statement: “The intensity of the demilitarization of the Russian Federation, especially in the border areas, in my opinion, will only increase significantly in the coming weeks. And this will finally raise the question among the Russians: “What are we doing in Ukraine? Why are we killing people there on such a massive scale for two months and what price are we willing to pay for it?

This is already a completely open challenge, a slap in the face - I'm not afraid of this word. And where are the promised blows? The military factories in Zhuliany and Darnitsa, destroyed by high-precision weapons, are, of course, important facilities. But not decision-making centers. Believe me, as a citizen of Kiev, the thought of destruction in the “government quarter”, in Pechersk, where every second building is an architectural monument, does not smile at all. But what if there is no other way? It is not clear to me why in this case people from the Kursk, Bryansk or Belgorod regions should pay for scrupulousness and humanism. I think they understand it even less. Exactly the same seems to be the situation with the supply of arms to the Ukronazis. The fact that Western convoys with them would be “a legitimate target for the Russian Aerospace Forces” was again said many times.

However, where is at least one example of the destruction of precisely such convoys, and not the places of storage and deployment of NATO "gifts" already on the territory of Ukraine? The difference between these two options, I think, does not need to be explained to anyone. The lack of coherent responses to the pumping of “nezalezhnaya” weapons led to the fact that it poured in there in a stream. And at the same time, strikes on the railway infrastructure began to be inflicted only recently - and then, one gets the impression, after almost all Russian media and social networks were filled with bewilderment about their absence. I willingly admit that the top leadership of the country and the army has the most serious reasons to adhere to just such tactics. But why then make "terrible" promises and promise retribution, which is not destined to come true? The negative effect of such actions cannot be overestimated.

What to expect in the rear?

I intend to devote a separate full-length text to this topic (and in the very near future), so I will focus only on the most basic. Moreover, it is simply impossible to bypass the problems of the territories already liberated from the Ukronazis after the events that happened the day before in Kherson. So what do we see? Yes, actually nothing - if you say, hand on heart. I would venture again to make an assumption: the issue of actions in the territories occupied by the Russian Armed Forces was not initially worked out at all, since they were supposed to automatically and painlessly go under the control of some “local able-bodied personnel”.

However, alas, in reality, there were no such in nature from the word “completely”, and it is time to take it for granted in the third month of the NWO. Moscow categorically refuses to talk about the occupation of the territories from which the Ukronazis were kicked out. As a result, everywhere, with the exception of those settlements that are part of the Donetsk and Lugansk People's Republics and where the issue of local authorities, "siloviki" and everything else is resolved, so to speak, by itself, a frightening vacuum arises. Nature, as you know, does not tolerate emptiness and is filled quickly enough - the only question is - by whom and with what. I already wrote earlier that in the abandoned territories, the Kyiv regime and its Western curators will create the most extensive and rooted sabotage and terrorist network. Then it was speculation. Today, the Bandera terror in the rear of the NVO has become a reality.

According to reports, a fairly serious terrorist attack against Russian servicemen was prevented in Melitopol. A solid arsenal, including mines, MANPADS and RPGs, was confiscated from the underground workers. Similar DRGs were left by the Ukronazis in Kherson. The situation in this city continues to be extremely tense. The day before, on April 27, there was another attempt to hold a “pro-Ukrainian” rally in the city under the slogan: “No to the referendum! No XNR! Interestingly, in Moscow they completely deny the intention to create the Kherson People's Republic, and in Kyiv they said that this "protest rally" is nothing more than a "peace initiative of local patriots." Be that as it may, the performance took place, and the National Guard had to calm down its participants with the help of stun and gas grenades. And at night, the Armed Forces of Ukraine hit Kherson with Tochka-U missiles. There is no doubt that Russia will be blamed for it. It is quite obvious that along with the “patriots” provocateurs, enemy fire spotters also entered the city without hindrance. If everything continues in the same way, then nothing good will come of it - both for the Russian army and for the local residents. The solution to this problem is seen in the announcement by Moscow of a clear vision of the status and future of the liberated territories and the creation of a full-fledged new government on them. At least capable law enforcement agencies. Moreover, with the advance of the Russian army, especially outside the Donetsk and Luhansk regions, southern Ukraine, this problem will aggravate a hundredfold.

Yes, yes, yes ... As you probably guessed, we will again talk about negotiations. This topic will not cease to be a problem exactly until it is closed completely and irrevocably. Or until the SVO ends. Nevertheless, the negotiations are ranting with might and main from representatives of Turkey, whose president goes out of his way to drag Vladimir Putin and Vladimir Zelensky to the same table (located, of course, in Istanbul). The clown president himself, no, no, yes, and "graciously agrees" to a meeting with the Russian leader, continuing to babble something about "the desire for peace." The topic of the "negotiation process" and its "prospects" was again raised by Russian Foreign Minister Sergei Lavrov during a visit to Moscow by UN Secretary General António Guterres. His words “we are committed to a negotiated solution and a ceasefire” - what is it for at all? Equally incomprehensible are the talks about some "concrete proposals, a draft document that includes absolutely clear, elaborated formulations", which allegedly "was handed over to Kyiv 10-12 days ago." And with which the local clown president did not even deign to get acquainted. This was voiced by both Mr. Lavrov and Dmitry Peskov. However, the Russian Foreign Minister also stated that "the Ukrainian side backed down from previous proposals, and thus, Kyiv took a huge step back in the negotiations on the advice of the US and Britain, backing down from the Istanbul proposals." It can be seen - Dmitry Kuleba, already in one voice with Boris Johnson and Josep Borrell, repeats that "victory will be achieved on the battlefield, and not at the negotiating table." So why continue this farce further?

The latest "peace proposals" made literally the day before by Washington sound like a completely outright mockery. “The United States is ready to accept a possible peace agreement between Ukraine and Russia, as a result of which Ukraine will become a neutral country, and will respect Kyiv’s decision to refuse NATO membership” - this is US Secretary of State Anthony Blinken, speech on April 26 at a hearing in the Senate Committee on Foreign Relations . "I really believe that in the future, if there is such an opportunity, Ukraine will again try to apply for NATO membership" - Pentagon chief Lloyd Austin. Said the next day... They really mock us, being sure of their own superiority and complete control over the situation. It is impossible not to admit that Russia gave certain reasons to its enemies to behave so impudently - stubbornly continuing the “negotiation” bodyagi that was insulting to it. And, by the way, in this way, the legitimization of the criminal regime of Zelensky as the legitimate leader of Ukraine, with which any agreements can allegedly be reached, also continues. It is high time to put an end to this, declaring the Ukronazi clique terrorists and war criminals, with all the ensuing consequences from these definitions.

The second phase of the NWO, which is now starting, will in no way remove the problems voiced above. It will exacerbate and exacerbate them a hundredfold. How will further events develop without their solution? Definitely not in a positive way.
Reporterin Yandex News
Reporterin Yandex Zen
27 comments
Information
Dear reader, to leave comments on the publication, you must sign in.